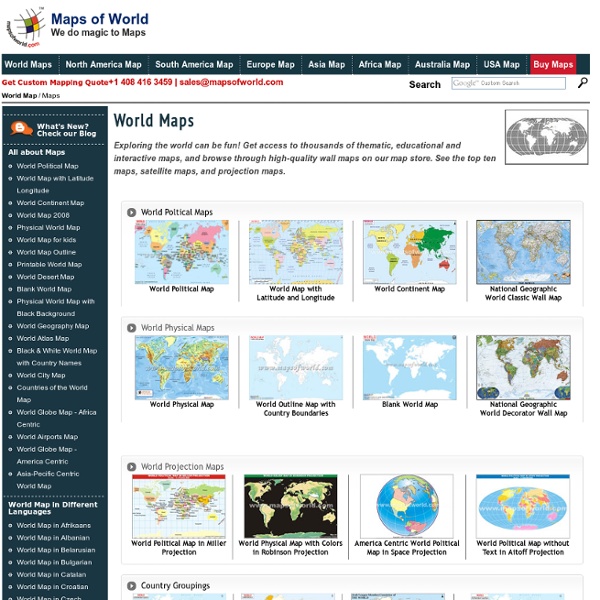 Index Mundi - Country Facts David Rumsey Historical Map Collection | The Collection Breathingearth - CO2, birth & death rates by country, simulated real-time Antique Maps, Old maps, Vintage Maps, Antique Atlases, Old Atlases CultureGPS Hofstede's Cultural Dimension Disclaimer: Culture influences patterns of thinking which are reflected in the meaning people attach to various aspects of life and which become crystallized in the institutions of a society. This does not imply that everyone in a given society is programmed in the same way: there are considerable differences between individuals. Statements about culture do not describe "reality", they are all general and relative. The cultural systems of nations and their subdivisions are very complex. Usage of the tool is at your own risk!

4 New Typographic Maps Grassroots Mapping Map Collection - World Sites Atlas World Atlas A physical and a political map of the world, divided into tiles for easy navigation. Maps of Continents and Regions Select a continent or region below to jump to its map. Maps of Countries and Territories Use the drop-down list below to jump to map for that country or territory (a few do not have maps yet).Click here for a complete list of country maps. Maps of U.S. Use the drop-down list below to jump to the map page for that state or province.Here is a list of all the state and province map pages. Maps of U.S. We have over 20,000 pages for U.S. cities and towns. Thematic World Maps Select a statistic below to go to its interactive world map.Here is a complete list of links.

WorldMap of SocialNetworks January 2017: a new edition of my World Map of Social Networks, showing the most popular social networking sites by country, according to Alexa & SimilarWeb traffic data (caveat: it’s hard to understand the impact of Google+ because it is part of Google domain traffic). There are a lot of news since last January: Facebook is still the leading social network in 119 out of 149 countries analyzed, but it was stopped in 9 territories by Odnoklassniki, Vkontakte and Linkedin. It’s interesting to see that in some countries, like Botwana, Mozambique, Namibia, Iran e Indonesia, Instagram wins and that some African territories prefer LinkedIn. Overall LinkedIn conquers 9 countries, Instagram 7, meanwhile VKontakte and Odnoklassniki (part of the same group Mail.ru) grow up in Russian territories. But what’s going on behind the first place? Instagram is the second social network in 37 countries. [Versione italiana dell’analisi di gennaio 2017] inShare1,047 But what’s going on behind the first place?

Map Collection Digital Maps The Harvard Map Collection is one of the oldest and largest collections of cartographic materials in the United States with over 500,000 items. Resources range from 16th century globes to modern maps and geographic information systems (GIS) layers. A selection of our materials has been digitally imaged and is offered both as true picture images and georeferenced copies. This Virtual Collection includes those maps and atlases that are available through the Harvard Image Delivery Service. Those maps that have been georeferenced are available through the Harvard Geospatial Library. Therefore, many of the maps listed will have two records, one for the image that is true to the original and the other a georeferenced image. Only a small portion of the Map Collection has been cataloged and included in the HOLLIS catalog and an even smaller selection are included in this virtual collection as digital images.