Create your own map, build interactive maps, place photos, videos on a map 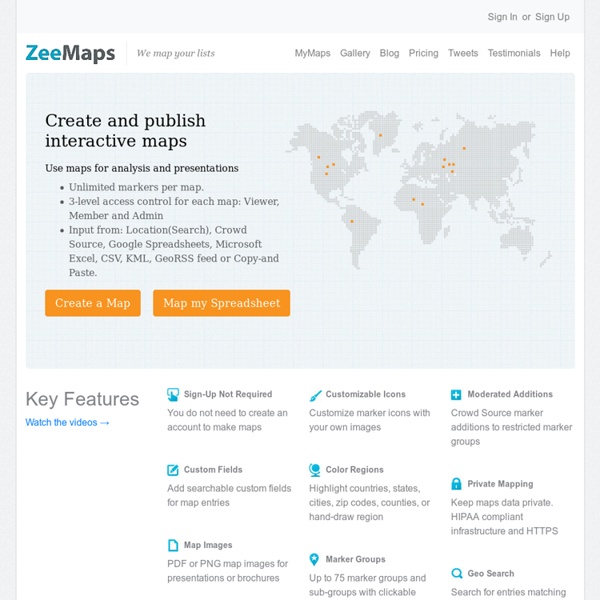 InDesign Style Sheets Tutorial Using InDesign Style Sheets (click here for Quark Style Sheets) If you've ever formatted large amounts of text in Adobe InDesign or Quark and then had to change the font, colour, character size or leading of all of the headings or body text, you'll know how time consuming it can be. It takes ages to trawl through large documents changing the attributes for each bit of text. And it's also an unreliable way to work - things can be easily missed or overlooked. It would be much better to be able to change all instances of a heading, caption or other text syle, all at the single click of a mouse. NatGeo Mapmaker Interactive YouTube Help The URL to a YouTube video must be the full length url. To ensure you are using the correct URL, visit your video on youtube.com.

Map Projections: Flatten the Sphere - GIS Geography Why use map projections? The best way to represent the Earth is with a globe. We live on one big blue marble that’s the shape of a sphere (or close to it) But globes are hard to carry in your backpack, you can only see one side of the globe, it’s hard to measure distances and they’re just not as convenient as paper maps. Woman digitally manipulates body to show unrealistic beauty conventions in viral video One artist is arguing against society's definitions of beauty with a captivating video. Kelsey Higley, 22, is a photographer and video artist from Tulsa, Okla. Higley has been receiving national attention for Manipulated, a video combined of 126 manipulated photos, where she looks as if she is reanimating her body to fit society's unrealistic beauty standards.

Collabora Online Development Edition (CODE) - Collabora Productivity Where can I find out more about the technical architecture? Clearly the code provides the canonical version of everything. However – here is some basic overview. The code splits into four pieces: Twitter Statistics - In-depth Report by Sysomos on Twitter's Growth Turn Social Intelligence Into Smart Crisis Prevention Find out how to prevent a social media crisis and protect your brand's reputation with your most powerful PR tool: social intelligence. How to Get Social Media Influencers Talking About Your Brand 6 tips to help you identify and build strong relationships with social influencers. How to Track Social Media Buzz

DengueMap Marker Color Marker color reflects the noteworthiness of events at a particular location during a given time window. An event's degree of noteworthiness is based on the significance rating of the alert provided by HealthMap users. In the absence of user ratings, the system assigns a composite score based on the disease importance and the news volume associated with the alert. If a location's marker has multiple alerts, the color associated with the most prominent alert is used. Marker Size

Boston public schools map switch aims to amend 500 years of distortion When Boston public schools introduced a new standard map of the world this week, some young students’ felt their jaws drop. In an instant, their view of the world had changed. The USA was small. Europe too had suddenly shrunk. Africa and South America appeared narrower but also much larger than usual.

Art: How to Describe a Work of Art Governments and media outlets all over the world have been focusing on the pro-independence process in Catalonia in recent weeks. But the “process,” as it is known in Spanish, has been a long time coming. And these are some of the tricks in its narrative. Recognize rights… or violate them The right to self-determination that the now-ousted regional authorities in Catalonia have been reclaiming for the last five years, with the backing of hundreds of thousands of people, would involve granting new rights to the Catalans: the ability to freely decide whether they should secede from Spain.

Débuter avec Firefox Welcome to Firefox! We'll show you all the basics to get you up and running. When you're ready to go beyond the basics, check out the other links for features you can explore later. By default, Firefox gives you access to great content every time you open a new tab. Customize this page by hovering over the sections and thumbnails or click the gear icon for more options. Whether you know the exact web address or you're just searching, Firefox's address bar handles it all.