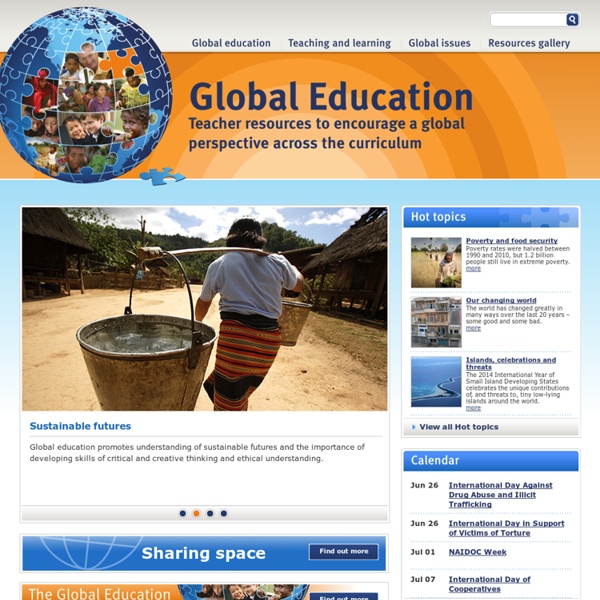 About the project In 2003, after The Earth seen from the Sky, Yann Arthus-Bertrand, with Sybille d’Orgeval and Baptiste Rouget-Luchaire, launched the 7 billion Others project. 6,000 interviews were filmed in 84 countries by about twenty directors who went in search of the Others. From a Brazilian fisherman to a Chinese shopkeeper, from a German performer to an Afghan farmer, all answered the same questions about their fears, dreams, ordeals, hopes: What have you learnt from your parents? What do you want to pass on to your children? What difficult circumstances have you been through?

Walking the Amazon On 9th August 2010, Ed Stafford became the first man to walk the length of the Amazon River in South America from the source to the sea. He walked for 860 days. No-one had ever done what he attempted. “Truly extraordinary… in the top league of expeditions past and present.” – Sir Ranulph Fiennes

Teenagers and UK culture Why bring UK culture to the teen classroom? We can introduce UK culture into the English classroom to help our students improve their English and at the same time learn about values and ways of doing things which may be different to theirs. Learning about life and culture in the UK can be very motivating as it brings the language alive for learners and creates a link between language and real life. See if you agree with these comments from teachers on teaching UK culture to their teenage learners: ‘We need to avoid reinforcing erroneous British stereotypes to our teenagers.

Global Learning This past year, students from around the world came together to collaborate on world issues affecting their communities, taking the concept of global learning and turning it into a reality. In GlobalCOlab (GCL), Students teaching students from around the world, has connected students and educators from different cultures and religions from around the world to cross-cut disciplines, curricula, and traditional subjects to empower participants through student-led and student-created topics. These topics are based around global issues affecting each student’s community. Human Rights This is the preparation material for an English conversation lesson about human rights. Human rights are rights inherent to all human beings, whatever our nationality, place of residence, sex, national or ethnic origin, colour, religion, language, or any other status. We are all equally entitled to our human rights without discrimination. Universal human rights are often guaranteed by the law of a country, general principles and other sources of international law.

How classrooms look around the world — in 15 amazing photographs To mark last month’s World Teachers’ Day (sponsored by UNESCO , the United Nations Educational, Scientific and Cultural Organization), photographers from Reuters took pictures around the world of educators with their students in a telling exhibit of the very different circumstances under which children attend school. Here are 15 pictures taken by Reuters photographers, revealing the spectrum of “classrooms” — from those with literally no resources to those well-stocked and housed. Teacher Mahajera Armani and her class of girls pose for a picture at their study open area, founded by Bangladesh Rural Advancement Committee (BRAC), outside Jalalabad city, Afghanistan September 19, 2015. (Reuters) Class one children aged between six and seven years old pose for pictures in their classroom at Gifted Hands Educational Centre in Kenya’s Kibera slum in the capital Nairobi, September 16, 2015.

Lost Property This EFL lesson is designed around a beautiful short film titled Lost Property by Asa Lucander. Students do a dictation, work out meanings of the verb ‘lose’, speak about lost items, watch a trailer and short film, and write a story. Language level: Intermediate (B1) – Upper Intermediate (B2) Learner type: Teens and adults Why Don’t We All Speak the Same Language? (Earth 2.0 Series) Linguists predict that some 3,000 languages spoken will go extinct within the next century. (Photo: Paul Stevenson/Flickr) Our latest Freakonomics Radio episode is called “Why Don’t We All Speak the Same Language? Best Resources For Teaching About Rosa Parks & 60th Anniversary Of The Montgomery Bus Boycott Thanks to Teaching Tolerance, I just learned that December 4th will be the 60th anniversary of the Montgomery Bus Boycott. I’m sure there will be lot of new resources becoming available in the next few weeks, and I’m also sure that there are plenty that I’m not including in the first edition of this post. Please let me know what I’m missing. You might also be interested some of the many previous “Best” lists I’ve published on the Civil Rights Movement & race and racism, including: The Best Websites For Learning About Martin Luther King