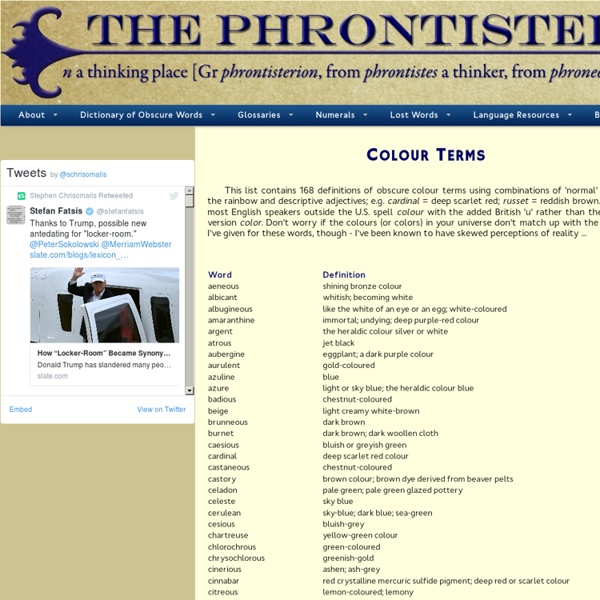 Colour Terms This list contains 168 definitions of obscure colour terms using combinations of 'normal' colours of the rainbow and descriptive adjectives; e.g. cardinal = deep scarlet red; russet = reddish brown. Note that most English speakers outside the U.S. spell colour with the added British 'u' rather than the American version color. Don't worry if the colours (or colors) in your universe don't match up with the definitions I've given for these words, though - I've been known to have skewed perceptions of reality ... I hope you have found this site to be useful. If you have any corrections, additions, or comments, please contact me.

7 Beautiful Words With No Direct English Translation You know that feeling you get when surrounded by close friends or family -- perhaps gathered around a fireplace after a meal, or chatting on the couch in your pajamas on a Sunday morning? There truly is no word to describe it. Or at least not in English. In Dutch, there's gezellig, which means cozy, but encompasses more than a physical feeling. It is a sort of social coziness.

How to Write with Style: Kurt Vonnegut’s 8 Keys to the Power of the Written Word Find a Subject You Care About Find a subject you care about and which you in your heart feel others should care about. It is this genuine caring, and not your games with language, which will be the most compelling and seductive element in your style. I am not urging you to write a novel, by the way — although I would not be sorry if you wrote one, provided you genuinely cared about something. Notes and diagrams show how famous authors including J.K. Rowling and Sylvia Plath planned out their novels By Tara Brady Published: 13:33 EST, 18 May 2013 | Updated: 20:52 EST, 19 May 2013 Gathering your thoughts when writing a novel can be a tricky process. Which is why many of the greats made sure they planned their plots beforehand. A mini-collection of notes penned by writers including James Salter and J.K. Rowling have surfaced.

Writer Creates “Color Thesaurus” To Help You Correctly Name Any Color Imaginable Ingrid Sundberg, a writer and children’s book illustrator, created a very useful infographic chart for anyone struggling with color names. The writer says that she loves to collect words that can help give her stories variety and depth. Show Full Text “I’ve learned that we all have different associations with color words,” Sundberg told Bored Panda. “For example the color sapphire is a light blue to me (since that’s the color of the sapphire on my engagement ring), but a sapphire can also be a very dark blue. Data Mining Novels Reveals the Six Basic Emotional Arcs of Storytelling Back in 1995, Kurt Vonnegut gave a lecture in which he described his theory about the shapes of stories. In the process, he plotted several examples on a blackboard. “There is no reason why the simple shapes of stories can’t be fed into computers,” he said.

How to write a scene One of the thing I admire most about Jane Espenson’s blog is that she talks very directly about the words on the page, giving names to techniques I use but never really think about. The two-percenter, for example. So one of my goals for 2007 is to get a little more granular in my advice-giving, and talk less about Screenwriting and more about screenwriting — in particular, scene writing. Spend a few years as a screenwriter, and writing a scene becomes an almost unconscious process.

The Color Thesaurus I love to collect words. Making word lists can help to find the voice of my story, dig into the emotion of a scene, or create variety. One of my on-going word collections is of colors. Kids explain how banned and challenged books helped them and even saved their lives / Boing Boing By Joan Bertin and Millie Davis Banned Books Week has come and gone but we can be sure of one thing: the coming year will be marked by challenges to the same kinds of books that were controversial this year, and in years past. report this ad Controversies over what books are taught in class or shelved in the school library typically start when an adult—usually a parent or community member—feels that a book selected by teachers and librarians is inappropriate, offensive or objectionable.

Creative Writing For Dummies Cheat Sheet Rewriting and editing helps to tighten up your work. But it can be difficult – what to chop and when to stop may not be clear, and you may change your mind more than once during the process. Ask yourself whether you need to take out: Unnecessary information and explanation. 12 Letters That Didn't Make the Alphabet You know the alphabet. It’s one of the first things you’re taught in school. But did you know that they’re not teaching you all of the alphabet? There are quite a few letters we tossed aside as our language grew, and you probably never even knew they existed. 1. 10 books that will make you a better writer (and why) Last week, I wrote about 25 habits that will make you a better writer. This week, I thought — let’s dive into books. After twenty-plus years writing, I’ve collected some resources that I absolutely couldn’t do with out. I love borrowing books. But there are some books that a writer really should have in their own personal for-keeps libraries.

Origins Of Popular Jewish Surnames Correction, Jan. 29, 2014: Some of the sources used in the reporting of this piece were unreliable and resulted in a number of untruths and inaccuracies. The original post remains below, but a follow-up post outlining the errors, as well as further explanation, can be found here. Ashkenazic Jews were among the last Europeans to take family names. Some German-speaking Jews took last names as early as the 17th century, but the overwhelming majority of Jews lived in Eastern Europe and did not take last names until compelled to do so. The process began in the Austro-Hungarian Empire in 1787 and ended in Czarist Russia in 1844. In attempting to build modern nation-states, the authorities insisted that Jews take last names so that they could be taxed, drafted, and educated (in that order of importance).