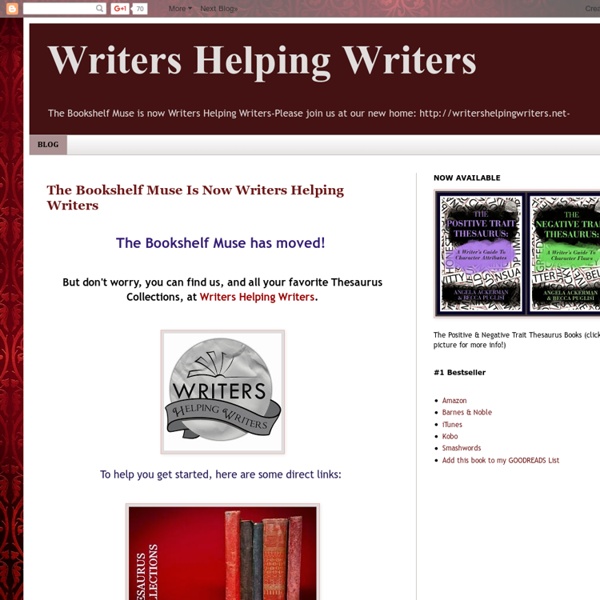 Voice is one of those things that agents, editors, and readers want us to get right, but it's so hard to nail, particularly when you're writing in third person. I read books like The Raven Boys (Stiefvater) and Shadow and Bone (Bardugo) and I'm blown away by the crystal clear voice; I can see that the voice can be strong in a third person novel, though I'm not sure exactly how to achieve it myself. That's why I'm loving today's post by Jodie Renner. She just been accepted as part of the team at The Kill Zone blog, and I can't think of anyone more qualified to share spot-on, practical tips for creating a strong third-person voice. ______

Related:  Stuck for a word? • mykel

100 Exquisite Adjectives By Mark Nichol Adjectives — descriptive words that modify nouns — often come under fire for their cluttering quality, but often it’s quality, not quantity, that is the issue. Plenty of tired adjectives are available to spoil a good sentence, but when you find just the right word for the job, enrichment ensues. Practice precision when you select words. Here’s a list of adjectives: 45 ways to avoid using the word 'very' Three Telling Quotes About ‘Very’ Substitute ‘damn’ every time you’re inclined to write ‘very;’ your editor will delete it and the writing will be just as it should be. ~Mark Twain‘Very’ is the most useless word in the English language and can always come out. More than useless, it is treacherous because it invariably weakens what it is intended to strengthen. ~Florence KingSo avoid using the word ‘very’ because it’s lazy.

10 of the World's Best Storytellers [SlideShare] Since before blogs were created, people have told stories. Shocking. I know. But long predating the clickity-clacking of our keyboards were generations of people finding creative ways to communicate meaning with one another -- to try to bring understanding to a complicated human experience. We painted on cave walls, carved pictures into trees, sorted images out of rocks, sang songs, danced, told stories ... the best of those stories being passed down from generation to generation. Storytelling is a cornerstone of human existence, and it's what enables successful people to communicate and connect with anyone -- and I mean anyone -- to this day.

Eat. Live. Laugh. and sometimes shop!: 50 most beautiful English words. A few weeks ago I ran across a list, which I shared with you, of 33 Ways to Stay Creative. One suggestion was to read a page in the dictionary. That one stuck with me. It made me pause and think: When was the last time I even looked up a word in a real {not online} dictionary?

Verbal Irony: Types Critical Concepts Verbal Irony Verbal irony is a figure of speech. The speaker intends to be understood as meaning something that contrasts with the literal or usual meaning of what he says. Libraries of the Future The Libraries of the Future project was established to help those running academic libraries to plan for the future. The project produced three scenarios which represent possible futures for higher education in the UK: the Wild West the Beehive, and the Walled Garden. These are not meant as predictions but as tools for academic libraries to use to review and hone their organisational strategies.

10 Blog Writing Lessons Learned from Authors I have a few favorite authors that I turn to again and again. Authors whose books I kept when I got rid of 600 other books over a two week period. And while most of my bibliophile friends 1) can’t imagine doing that, and 2) are wondering why I didn’t call them first, I’ve enjoyed being free of most of my old and unread books. But I’ve kept these authors’ books because I learned something from them. A lot of these writers, and one singer, have imparted lessons to me, either through their writings or their interviews.

100 Mostly Small But Expressive Interjections David Bier Thanks for this – what a fun post considering there’s no actual narrative in it! Cecily Some of these interjections are quite culturally and age specific, so if people need to be told what they mean, they should probably not be using them.For example, to many Brits, va-va-voom is not old-fashioned at all, but instead is firmly linked to the long-running ads that footballer Thierry Henry made for the Renault Clio. Himanshu Chanda Whoa ! What a biiiig list. Color Words Colour Terms This list contains 168 definitions of obscure colour terms using combinations of 'normal' colours of the rainbow and descriptive adjectives; e.g. cardinal = deep scarlet red; russet = reddish brown. Note that most English speakers outside the U.S. spell colour with the added British 'u' rather than the American version color.

The 20 Most Beautiful Bookstores in the World [Editor’s note: In celebration of the holidays, we’re counting down the top 12 Flavorwire features of 2012. This post, at #1, was originally published January 31.] With Amazon slowly taking over the publishing world and bookstores closing left and right, things can sometimes seem a little grim for the brick and mortar booksellers of the world. After all, why would anyone leave the comfort of their couch to buy a book when with just a click of a button, they could have it delivered to their door? Well, here’s why: bookstores so beautiful they’re worth getting out of the house (or the country) to visit whether you need a new hardcover or not. We can’t overestimate the importance of bookstores — they’re community centers, places to browse and discover, and monuments to literature all at once — so we’ve put together a list of the most beautiful bookstores in the world, from Belgium to Japan to Slovakia.

How to Write a Letter (with Free Sample Letters) Steps Method 1 Writing a Formal Letter <img alt="Image titled Write a Letter Step 1" src=" width="728" height="546" class="whcdn">1Know when to write a formal letter. Write a formal letter when addressing someone you only know in a professional capacity. This includes letters written to government departments or businesses, instead of a known individual.