4 Practical Philosophies That Will Empower You 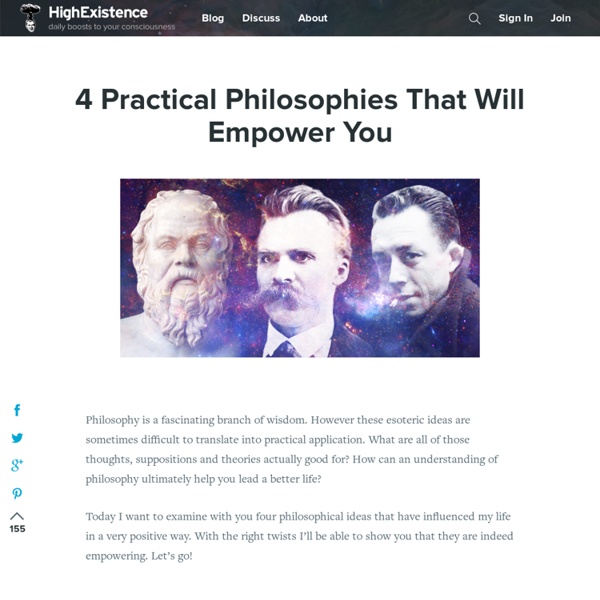 Philosophy is a fascinating branch of wisdom. However these esoteric ideas are sometimes difficult to translate into practical application. What are all of those thoughts, suppositions and theories actually good for? How can an understanding of philosophy ultimately help you lead a better life? Today I want to examine with you four philosophical ideas that have influenced my life in a very positive way. With the right twists I’ll be able to show you that they are indeed empowering. 1) Friedrich Nietzsche – Eternal Recurrence The Idea Several times throughout his works, Nietzsche talks about the thought experiment of eternal recurrence. Does the idea of eternal recurrence – that every moment of your life will repeat itself into eternity – leave you shivering with fear or with joy; whether you are living life fully everyday or just waiting for better times to come. Heaven or hell, you decide 2) Socrates – No One Does Wrong Willingly Learn your way to pleasure L’idée Liberté et responsabilité

This Is How Much Money You'll Make Based on Your Personality If you spent a lot of time on the Internet as a teen, you’ve taken approximately a bajillion personality tests. At least one was probably the hugely popular Myers-Briggs Type Indicator, which sorts people into 16 different groups with 4-letter names. The test, based off of Jungian psychiatry and developed by mother-daughter author duo Katharine Cooks Briggs and Isabelle Myers Briggs in 1962, is supposed to tell you if you are introverted or extraverted, intuitive or sensing, thinking or feeling and perceptive or judgmental. Each combination–INFJ or ESTP, for example–is representative of different characteristics, behaviors and preferences. The types can then be divided into four groups: artisans, guardians, idealists and rationalists. Web Talent, careerassessmentsite.com Career Assessment Site, maintained by Jonathan Bollag, recently published an in-depth infographic that shows exactly how much money different personality types will likely make in their lives.

13 World Mysteries Without Explanation Chinese mosaic lines These strange lines are found at coordinates: 40°27’28.56″N, 93°23’34.42″E. There isn’t much information available on these strange, yet beautiful mosaic lines carved in the desert of the Gansu Sheng province in China. Some records indicate they were created in 2004, but nothing seems official. Unexplained stone doll The July 1889 find in Nampa, Idaho, of a small human figure during a well-drilling operation caused intense scientific interest last century. The find has never been challenged except to say that it was impossible. creationism.org The first stone calendar In the Sahara Desert in Egypt lie the oldest known astronomically aligned stones in the world: Nabta. During this time, the area was a savanna and supported numerous animals such as extinct buffalo and large giraffes, varieties of antelope and gazelle. 300 million year old iron screw At that time there were not only intelligent life forms on earth, not even dinosaurs. Ancient rocket ship Pyramid power

Tiny human almost-brains made in lab Largely left to their own devices, human stem cells knitted themselves into tissue with a multitude of brain structures and specialized cadres of neurons in a form reminiscent of the brain of a nine-week-old fetus, scientists report August 28 in Nature. The tissue doesn’t approach the dizzying complexity of the human brain. Yet these tiny neural balls, each no bigger than a BB pellet, represent the most complex brain structure grown in a lab to date, researchers say. The new work could provide an unprecedented window into the early stages of human brain development, a simple way to test pharmaceuticals on human brain tissue and a way to study the brain defects of individual patients, the study authors suggest. “They’ve done something very remarkable,” says Flora Vaccarino of Yale University. The tissue clumps also had discrete parts of the cerebral cortex, the outer sheet of the human brain that’s responsible for advanced thought processes. Microcephaly has been difficult to study.

Mythical Creatures List, Mythical Creatures A-Z What Does Your Handwriting Say About You? What Does Your Handwriting Say About You? graphology Graphology is the study of handwriting, especially when employed as a means of analyzing a writer's character, personality, abilities, etc. How you write can indicate more than 5,000 different personality traits. In the medical field, it can be used to refer to the study of handwriting as an aid in diagnosis and tracking diseases. size large letters You are out-going, people oriented, outspoken & love attention. small letters You are shy or withdrawn, studious, concentrated and meticulous. average You are well-adjusted and adaptable spacing between words wide spacing You enjoy your freedom and don't like to be overwhelmed or crowded narrow spacing You can't stand to be alone. slanting No Slant You don't let your emotions get the best of you. Slants to the right You are open to new experiences & enjoy meeting new people. Slants to the left You tend to keep to yourself and generally like to work behind the scenes. shape of the letters Rounded letters Open

Wire your Brain to Pick up a New Language Today  Have you ever wondered how some people can speak multiple languages fluently or how some people seem to pick up new languages little effort? Many of these people have used the Pimsleur Approach – A well known provider in audio-based language learning. It’s a unique method that’s been used by over 25 million people to quickly and effectively start speaking a new foreign language in just 10 days. Even the FBI purchased the Pimsleur Approach. The Secret to Start Speaking a Language in just 10 Days Revealed In today’s global society, learning a foreign language is crucial, whether you need it for work or pleasure. Pimsleur Approach Numerous studies have revealed that in most countries, native-speakers use only about 2,500 distinct words and phrases on a daily basis. The entire Pimsleur Approach is what language learning should be: quick, fun, and easy! Dr. Dr. Pimsleur Approach currently has a great special offer available.

Sports, Complexity, and the Ten-Thousand-Hour Rule Forty years ago, in a paper in American Scientist, Herbert Simon and William Chase drew one of the most famous conclusions in the study of expertise: In the years that followed, an entire field within psychology grew up devoted to elaborating on Simon and Chase’s observation—and researchers, time and again, reached the same conclusion: it takes a lot of practice to be good at complex tasks. After Simon and Chase’s paper, for example, the psychologist John Hayes looked at seventy-six famous classical composers and found that, in almost every case, those composers did not create their greatest work until they had been composing for at least ten years. (The sole exceptions: Shostakovich and Paganini, who took nine years, and Erik Satie, who took eight.) This is the scholarly tradition I was referring to in my book “Outliers,” when I wrote about the “ten-thousand-hour rule.” No one succeeds at a high level without innate talent, I wrote: “achievement is talent plus preparation.”

10 Sentences that Can Change Your Life The power of a sentence is tremendous. A single destructive sentence can ruin somebody’s life, make your day, or change your mood. Fortunately, there are some sentences that can give us power to go on. We have sorted out 10 powerful sentences that can change your life for the better. #1 “People aren’t against you; they are for themselves.” #2 “Climb mountains not so the world can see you, but so you can see the world.” #3 “You learn more from failure than from success; don’t let it stop you. #4 “The most dangerous risk of all – The risk of spending your life not doing what you want on the bet you can buy yourself the freedom to do it later” #5 “Go where you’re celebrated, not where you’re tolerated.” #6 “The person that you will spend the most time with in your life is yourself, so you better try to make yourself as interesting as possible.” #7 “If you accept your limitations you go beyond them.” #8 “People often say that motivation doesn’t last. #10 “Comfort is the enemy of achievement.”