List of French words and phrases used by English speakers 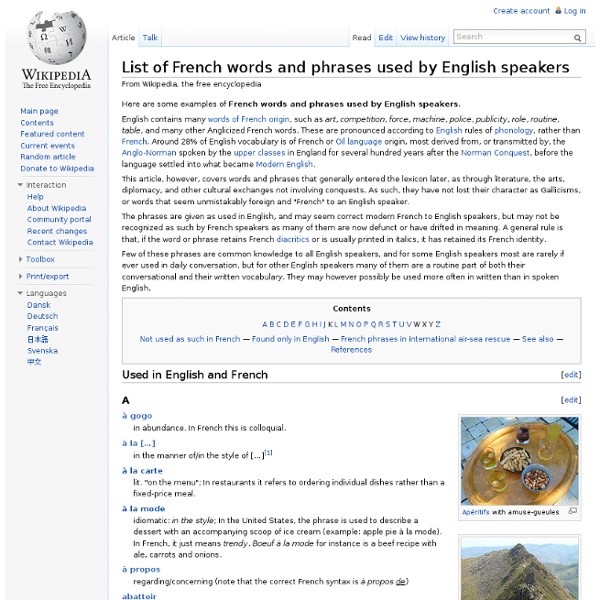 Here are some examples of French words and phrases used by English speakers. English contains many words of French origin, such as art, competition, force, machine, police, publicity, role, routine, table, and many other anglicized French words. These are pronounced according to English rules of phonology, rather than French. Around 28% of English vocabulary is of French or Oïl language origin, most derived from, or transmitted by, the Anglo-Norman spoken by the upper classes in England for several hundred years after the Norman Conquest, before the language settled into what became Modern English. This article, however, covers words and phrases that generally entered the lexicon later, as through literature, the arts, diplomacy, and other cultural exchanges not involving conquests. Used in English and French[edit] A[edit] à gogo in abundance. à la in the manner of/in the style of[1] à la carte lit. à la mode à propos regarding/concerning (note that the correct French syntax is à propos de) adieu Related:  writing stuff • douggood

500 Storyboard Tutorials & Resources Once the script is written – how do you effective communicate the visual direction of your film? The answer is storyboards – essentially a scene-by-scene visual guide to the screenplay of the film. Storyboards are a vital part of the pre-visualization process, as well as being an important tool for preproduction and on the set. Developed in the 1930s by Walt Disney company for their animated cartoons, they grew in popularity during the early 40s. Here are over 500 storyboarding tutorials, resources and tools to help you better communicate your vision. Celtx Celtx is the world’s first all-in-one media pre-production system. 110 Celtx Tutorials FrameForge 3D The software creates virtual cameras, actors and objects in photo-accurate 3D scaled sets for previsualization. Toon Boom: Storyboard Pro This software is used to create storyboards. PowerProduction: StoryBoard Artist Productivity merged with creativity. PowerProduction: StoryBoard Quick

French Swear Words: My 10 Favorites by Julie Blakley | March 4th, 2011 For those who learned French in the classroom, I’m guessing the teacher was not willing (or able) to teach students how to properly and thoroughly cuss in French. So, in that vein, here are some of my very favorite French curses. These are the things you hear spilling out of cab driver’s mouths, accidentally being shouted by a grandmother when she drops the milk, or accompanied by grimaced faces and occasional hand gestures in the streets of Paris. Now, before you go around dropping the French equivalent of the F bomb on your next trip, keep in mind that language plays an immensely important role in French culture. Julie’s 10 Favorite French Swear Words 1. This translates quite literally as “shit.” 2. This word packs a serious punch, so use it with caution (and maybe not in mixed company). 3. This word is most commonly used in the context of “ça me fait chier,” which translates as a more vulgar version of “that pisses me off.” 4. 5. 6. 7. 8. 9. 10.

100 Exquisite Adjectives By Mark Nichol Adjectives — descriptive words that modify nouns — often come under fire for their cluttering quality, but often it’s quality, not quantity, that is the issue. Plenty of tired adjectives are available to spoil a good sentence, but when you find just the right word for the job, enrichment ensues. Subscribe to Receive our Articles and Exercises via Email You will improve your English in only 5 minutes per day, guaranteed! 21 Responses to “100 Exquisite Adjectives” Rebecca Fantastic list! Top 10 first lines in children's and teen books | Children's books The boy and the old man arrived at the port at night. That's the first line in my debut novel, Close to the Wind, and I'm rather proud of it. The line doesn't shout out at you, but it does a lot of work establishing the tone of the book and giving you the setting and characters without any fuss. It's always difficult to know how to begin a book. Originally, I had a much bolder first line but during an editorial meeting it was suggested I lose it and start with the second line in. Of course, I objected. An opening sentence should draw the reader from their own head and take them somewhere completely different. It was a dark, blustery afternoon in spring, and the city of London was chasing a small mining town across the dried out bed of the old North Sea. 1. Is this the best ever opening line from a children's book? The first thing you find out when yer dog learns to talk is that dogs don't got nothing much to say. 2. A great book that's all about the voice and he nails it in the first line.

Write Your Name in Elvish in Ten Minutes - StumbleUpon Write Your Name in Elvish in Ten Minutes You want to write your name in Elvish, but every place you go seems to make it harder than it ought to be. Elvish writing looks beautiful and mysterious, but does it really have to be impossible to understand? Why doesn't somebody just spell out the alphabet so you can simply substitute the letters and get straight to the result? Here's the alphabet. That's it. Generally the vowels go above the consonants, but sometimes, in the case of Y and silent E, they go below. The straight line underneath is just one way to make one character do the work of two. The line above a consonant means that a nasal N or M precedes the consonant in question. Here's one last example with two different letter combinations. I am often asked how to handle double vowel situations. That's all you need to get started. Please be aware that there are many ways to write English words in Elvish. Good luck! Ned Gulley Want an Elvish tattoo? Want an Elvish t-shirt?

Word Spy Get Me Writing » 5 Interactive Fiction Authoring Tools EmailEmail If you want to get into writing Interactive Fiction (IF) it can be hard to know where to get started. So here is a list of five IF authoring tools so you can pick the approach that’s best for you. This is an update of a post I wrote way back in 2010. Because this is a long one, here are some quick links in case you came here for a specific tool:Twine Inform TADS Quest ADRIFT Twine (Mac, Windows, Linux) Summary Visual interfaceProduces HTML-based stories (that require javascript)Has limited support for basic programmingGood entry-level system Twine is the simplest way to create a text adventure, and therefore the easiest to use. The work is compiled in HTML format, and works on any browser that supports javascript (and has it turned on. The graphical interface makes it immediately obvious what is going on. Twine uses a graphical interface to show its simple text and links concept. If you want to “go deep” with Twine, you can add your own HTML and stylesheets. There is a caveat.

Language Exchange Community - Practice and Learn Foreign Languages - StumbleUpon Unusual Words Unusual Words A by no means exhaustive list of rare, obscure, strange and sometimes funny words and their meanings that only seem to crop up in crosswords and dictionaries. Words that are used so seldom, you wonder who invented them and why. Home ~ The Stories ~ Diversions ~ Links ~ Contact Creating memorable fictional characters UWA Extension Fictional characters must possess sufficient strength of character to handle difficult dilemmas. In other words, they must be up to the demands of the plot. John Harman will show you how to create convincing characters, even those of the opposite gender. A story may be structured like a journey with a: Compass – the premise, theme, threadsMap – the plotEngine – the motivation of the protagonist (plus other central characters)Fuel – the dialogue The depth, dimensionality and authenticity of the story’s characters are vital. What comes first: plot or character? Students will benefit from watching the film ‘Thelma and Louise’ prior to attending this course. This course is held at Love House, on the Corner of Broadway and Cooper Street in Crawley. Lunch is not provided but you are welcome to bring your your lunch or to purchase from a nearby cafe.

IdiomSite.com - Find out the meanings of common sayings - StumbleUpon 50 Obscure English Words to Impress Your Friends According to the Global Language Monitor, English has more than 1,000,000 words (although even large dictionaries tend to contain about a third or a fourth), more than any other language spoken on Earth (that's more than thrice the amount of words in Spanish alone, another leading language in amount of words). Yet, most people only know 5,000 - 6,000! Of course, often, not much more than that is needed; English has an incredible amount of words with the exact same meaning. As said by About.com, English has only 250,000 - 300,000 when only "normal" words are counted; the rest are obsolete words, technical terms, or jargon that has more or less entered our language. A lot of these words are so bizarre, that you wonder why they were ever coined. Here are fifty of such words that never quite caught on. Abacinate: to blind someone using red-hot metal. Chance of using in conversation sometime: 1/10 Maybe if you're talking about a news story where this happens to someone, but highly unlikely.

Connecting Your Characters to Settings in Your Novel We’ve been looking at settings in your novel: the overall milieu or locale that your story takes place in, as well and the various locations your scenes are set in. I’ve encouraged you to take the time to come up with fresh, significant settings instead of defaulting to the easiest and first location types that come to mind, such as restaurants and coffee shops. We spend a lot of our time at work and home, and occasionally at those restaurants and coffee shops, but that is ordinary life. And while we want to show our characters in their ordinary lives (at least sometimes), readers don’t want “boring.” So the challenge for novelists is to come up with settings that are interesting. Settings That Trigger Emotion I had you think about places in your past that are emotionally charged to you. Does your protagonist, for example, have a strong emotional connection to one or both parents (who may still be living or have died before your story starts)? Conflict, Conflict, Conflict!