11 Untranslatable Words From Other Cultures 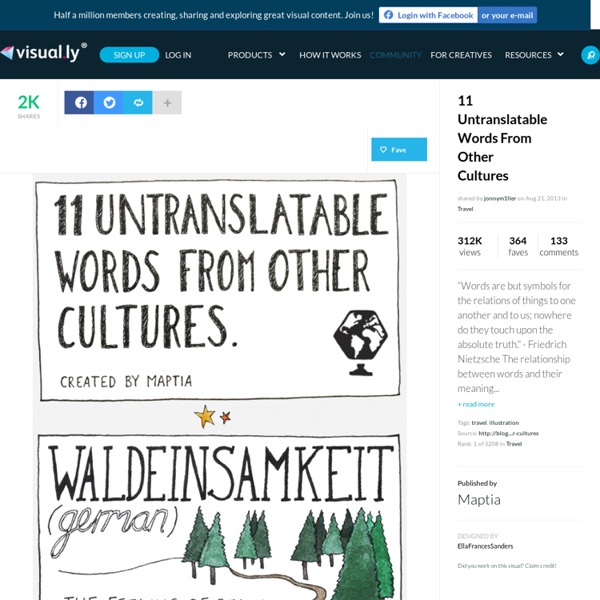 The Phrontistery: Obscure Words and Vocabulary Resources What's Wrong With Our Culture Thought-provoking 5 minutes on the state of the world from the late, great Alan Watts, a man far ahead of his time. Created by The Omega Point Project. “Your world is an illusion. From the day you were born, you have been conditioned. You worked hard for the future with your reward always just around the next corner or just up the next step. You accepted it as natural for one to be wealthy whilst another is poor, or the absurd notion that we must pay back the debt of our own existence. We need to move beyond revolution and into the next stage of human evolution. We will take no power back as we shall empower ourselves and we shall say: We are the humans. - Anonymous Related Posts

Color Words Colour Terms This list contains 168 definitions of obscure colour terms using combinations of 'normal' colours of the rainbow and descriptive adjectives; e.g. cardinal = deep scarlet red; russet = reddish brown. Note that most English speakers outside the U.S. spell colour with the added British 'u' rather than the American version color. Don't worry if the colours (or colors) in your universe don't match up with the definitions I've given for these words, though - I've been known to have skewed perceptions of reality ... I hope you have found this site to be useful.

Neil Gaiman: Why our future depends on libraries, reading and daydreaming It’s important for people to tell you what side they are on and why, and whether they might be biased. A declaration of members’ interests, of a sort. So, I am going to be talking to you about reading. And I am biased, obviously and enormously: I’m an author, often an author of fiction. So I’m biased as a writer. And I’m here giving this talk tonight, under the auspices of the Reading Agency: a charity whose mission is to give everyone an equal chance in life by helping people become confident and enthusiastic readers. And it’s that change, and that act of reading that I’m here to talk about tonight. I was once in New York, and I listened to a talk about the building of private prisons – a huge growth industry in America. It’s not one to one: you can’t say that a literate society has no criminality. And I think some of those correlations, the simplest, come from something very simple. Fiction has two uses. I don’t think there is such a thing as a bad book for children. It’s tosh.

100 Mostly Small But Expressive Interjections David Bier Thanks for this – what a fun post considering there’s no actual narrative in it! Cecily Some of these interjections are quite culturally and age specific, so if people need to be told what they mean, they should probably not be using them.For example, to many Brits, va-va-voom is not old-fashioned at all, but instead is firmly linked to the long-running ads that footballer Thierry Henry made for the Renault Clio. Himanshu Chanda Whoa ! What a biiiig list. And yes this ones really great. 5 Insane Ways Words Can Control Your Mind On some level we already know that language shapes the way we think. We're automatically more afraid to fight a guy named Jack Savage than somebody named Peewee Nipplepuss, even if we've never seen either of them before. It's totally illogical, but you probably run into an example of that every day, and don't notice it. While we tend to think words are just sounds we make to express ideas, science is finding that language is more like a fun house mirror, warping what we see in mind-blowing ways. For instance ... Speaking English Makes Us More Likely to Blame People Let's say your roommate Steve is jumping on your bed. How will you answer? Keep in mind, Steve pulls this shit all the time. The answer largely depends on what language you speak. Stanford scientists did experiments on this, by having speakers of various languages watch videos featuring, in various situations, people breaking eggs or popping balloons, sometimes on purpose, sometimes on accident. Will nothing stop his madness?

Feelings and Emotions Vocabulary Word List Advertisement. EnchantedLearning.com is a user-supported site. As a bonus, site members have access to a banner-ad-free version of the site, with print-friendly pages.Click here to learn more. (Already a member? More Word Lists 45 ways to avoid using the word 'very' Writers Write is your one-stop resource for writers. Use these 45 ways to avoid using the word ‘very’ to improve your writing. Good writers avoid peppering their writing with qualifiers like ‘very’ and ‘really’. They are known as padding or filler words and generally add little to your writing. According to Collins Dictionary: ‘Padding is unnecessary words or information used to make a piece of writing or a speech longer. Synonyms include: waffle, hot air, verbiage, wordiness.’ Adding modifiers, qualifiers, and unnecessary adverbs and adjectives, weakens your writing. This post gives you 45 ways to avoid using the padding word ‘very’. Three Telling Quotes About ‘Very’ “Substitute ‘damn’ every time you’re inclined to write ‘very;’ your editor will delete it and the writing will be just as it should be. If you enjoyed this, you will love: Top Tip: If you want to learn how to write a book, sign up for our online course. by Amanda Patterson © Amanda Patterson