BROTRON The Art of Greg Brotherton 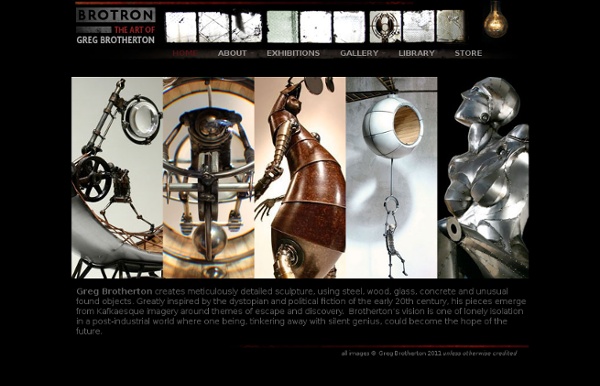 Gravity-Defying Land Art by Cornelia Konrads German artist Cornelia Konrads creates mind-bending site-specific installations in public spaces, sculpture parks and private gardens around the world. Her work is frequently punctuated by the illusion of weightlessness, where stacked objects like logs, fences, and doorways appear to be suspended in mid-air, reinforcing their temporary nature as if the installation is beginning to dissolve before your very eyes. One of her more recent sculptures, Schleudersitz is an enormous slingshot made from a common park bench, and you can get a great idea of what it might be like to sit inside it with this interactive 360 degree view. What you see here only begins to sratch the surface of Konrad’s work.

Steampunk Central - The Home of Western Steampunk Do you love Science Fiction but get bored with everything being set centuries in the future, universes full of technobabble and strange alien cultures who are well, alien? Do you wonder what our world would have been like if technology had leapt forward not ten years but a hundred years ago? If so, then the world of Steampunk is for you! Discover the fun of starships, time machines and space travel all based upon steam and hydraulics ? taking the best parts of Science Fiction and combining them with imaginative retro twists that can take you to the Wild West, Victorian England or even the world of Renaissance Europe and the genius of Leonardo Da Vinci. See how the world might have been, and how history could be re-written in strange and fun ways!

A guide to Colour and Colour Mixing Introduction Useful Videolinks Videos on YouTube The world around us is a constantly changing spectacle of colour. January 2012 I was recently privileged to interview a band that has been bringing Steampunk Music, almost single handedly it seems, to Paris and the rest of France. When I first listened to their newest album "Electric Rain", my first thoughts were "very fun and very Steampunk!" About the steampunk part, they don't even try to be subtle and that's why I like it so much. About this interview, my first gut reaction when I thanked them for the interview seems very appropriate in describing how it came across and so I will share it with you: What I really like is that it is very candid, personal, and brutally honest! It is also funny one moment and philosophical the next. I especially laughed when big machine switched from rock star mentality to one of the most profound definitions of steampunk music I have encountered to date.

steamfashion - Community Profile This community was created for members such as yourself to share your take on what Steampunk fashion is. We are interested to see your creations, though this doesn't necessarily mean you must have sewn or created your attire; combining items into a well-coordinated outfit counts too. We also enjoy seeing interior decoration and other gadgets relevant to the visual style of steampunk. What is steampunk?Steampunk is the science fiction of the steam age, re-imagined with the advantage of modern hindsight. Dreamcatcher DIY – How to make your own Dreamcatcher Pin It if you love dreamcatchers as much as i do, you must check out the work of rachael rice. she’s a very talented artist who makes dream catchers that are beyond anything i’ve ever seen. and that’s just one thing she makes – she is extremely creative and was kind enough to share some of her projects and how she makes them for our blog! once you have the basic steps down for making a dreamcatcher, it becomes much easier to experiment and get a little crazy with them! here, rachael demonstrates how to make small ones using bangles and string – these would be adorable for key chains, bag charms and hanging in your car! once this part is complete, attach feathers or any other embellishments using string! rachael has also been making more conceptual dream catchers using pieces of cardboard or thick paper, vintage doilies and hand-made paper feathers!

Kerosene Lamp and Lantern Workshop Making and Repairing Kerosene Lamps: When I was about 14 I purchased a brass boatman's lantern at a narrow boat chandlery in Nantwich England while on a canal boat trip with my family. Since then I have acquired several more oil and kerosene lamps and lanterns and my interest in 19th century oil lamps and kerosene lighting has grown. Below is the boatman's lantern and at the right you see one of my most recent acquisitions, a W.T Kirkman No.0. The No.0 is a reproduction of an early Dietz hot blast tubular lantern made in the mid 1800s.

The Vampire Awakening... Takato Yamamoto - By Meghan | The paintings of Takato Yamamoto have a vicious beauty; their stunning detail is akin to the Ukiyo-e woodblock prints of the 18th century that initially influenced his work, but Yamamoto has developed his style into something he calls “heisei aestheticism.” He combines brutality with serenity in his paintings – blood and gore envisioned in intricate and delicate lines, with a graceful flow running through each scene. There is a vibrant sexuality in much of his work, but he also works in death and torture in the disturbingly erotic way that you expect from manga. Yamamoto’s work is available as high quality prints here, and you can also pick up books of his work. Step through the gates of the underworld and check out a gallery of his work below…

Imparting Grace A few weeks ago I completed a fun project for my kitchen. I shared it with Traci at , but in case you missed it, I want to show it off here. It's a completely no-sew faux Roman shade. Here's exactly how I made it. First I chose a fabric. I considered something light-colored, but this is a west-facing window, so I wanted a dark background color to provide good heat-blocking on summer afternoons. game slouching toward bedlam Office *clunk* The rotating tin cylinder within the phonograph vibrates slightly as a brass needle scrapes against it. The sound of a throat being cleared emerges from the machine's hornshell speaker, followed by a thin, haunting voice. "March the 16th."

Surreal Storytelling Illustrations by Andrew Ferez Moscow-based Russian illustrator Andrew Ferez, aka 25kartinok, creates surreal scenes, each with their own fantastical narratives, that seamlessly merge various opposing elements. Digitally drawing his elaborate renderings, Ferez's work has a dark, fantasy-driven appeal. The digital artist manages to incorporate the human face into several areas of his works in creative ways. Whether multiple faces are fused with a crumbling city, facial features are protruding from urban architecture, or a woman's contemplative expression is formed out of the branches and leaves of a golden tree, Ferez does a brilliant job of fusing two normally separate entities. Even a giant typewriter integrated into a cathedral is in one of the artist's illustrations, making for a unique perspective of each component. Though they clearly don't belong to one another in the real world, there's something visually appealing about their combination that, for a second, looks right.

Slouching Towards Bedlam Summary[edit] The player character awakens in an office in Bedlam Asylum. From context it appears that the character is Doctor Xavier, a doctor at the Asylum. An Old Favorite I was doing a bit of pattern printing this week, and every time I print an older pattern of mine, I find something new and different to like about it. Take FEATHERED DIAMONDS, for instance.... one of my first designs done 'way back in 2000. It only uses two skeins of any variegated Watercolours thread you like, plus 2 skeins (or 1 ball) of #5 pearl cotton in ecru, or any pale background color. I think I used Watercolours 51 - "Abalone" on this original model.... but everytime I print it out I'm struck again at how timeless this design is, yet complicated enough for the eye to find something interesting to look at! And without lots of thread color changes, you get the chance to really absorb the luscious colors in the solo variegated skein you've chosen for the piece.