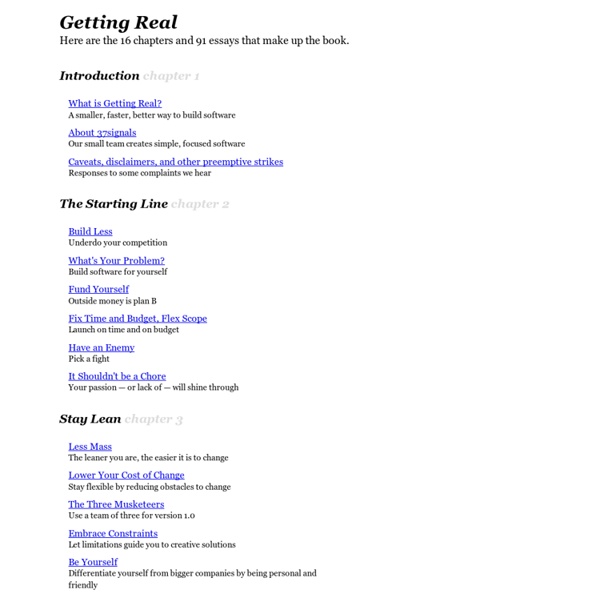 Here are the 16 chapters and 91 essays that make up the book. Introduction chapter 1 What is Getting Real?A smaller, faster, better way to build software About 37signalsOur small team creates simple, focused software Caveats, disclaimers, and other preemptive strikesResponses to some complaints we hear The Starting Line chapter 2 Build LessUnderdo your competition What's Your Problem? Stay Lean chapter 3 Less MassThe leaner you are, the easier it is to change Lower Your Cost of ChangeStay flexible by reducing obstacles to change The Three MusketeersUse a team of three for version 1.0 Embrace ConstraintsLet limitations guide you to creative solutions Be YourselfDifferentiate yourself from bigger companies by being personal and friendly Priorities chapter 4 What's the big idea? Feature Selection chapter 5 Process chapter 6 The Organization chapter 7 Staffing chapter 8 Interface Design chapter 9 Code chapter 10 Words chapter 11 Pricing and Signup chapter 12 Promotion chapter 13 Support chapter 14

The Laziness Paradox: Embrace Your Weaknesses to Accomplish More I was recently having dinner with a friend who was telling me his plan to get in shape. He had always been on the skinny side and wanted to bulk up a bit. His plan was to gain ten pounds over the following two months. Being the good friend I am, I told him he’d probably fail. My response may seem rude or pessimistic, but it was the truth. I’ve known this friend for a long time—long enough that we can give each other blunt feedback without taking offense—and setting fitness goals only to make zero progress was so common it was practically a ritual for him.

Architectural Shift in Web Applications The application development landscape has been changing continuously over the past few years, both on the client side (frontend) as well as on the server side (backend). On the client side, we have plenty of awesome new and updated JavaScript [and other scripting] frameworks; and on the server side, we have new architectural approaches such as single page applications, microservices, and serverless architectures. This is going to be a series of articles for full stack developers, especially those coming from a server side background, introducing trends and best practices in web application design and development. To kick off this series, let’s start by looking into the server side architectural shifts that have been taking place. The Recent Past: The Traditional N-Tier Architecture In the last decade, the web has dominated as the preferred platform for delivering content and services.

How to build role-based access control in SQL at Xaprb The posts I’ve been reading and writing recently have reminded me how Object-Relational Mapping (ORM) systems make it fun and convenient to interact with databases. For some of the reasons they’re a developer’s favorite, they can be a database administrator’s nightmare (think surrogate keys). But designing tables with a consistent set of columns has its benefits. Just because the columns are meta-data that have no intrinsic meaning doesn’t mean they have no value. 5 Tips To Transition From A Free To A Paid Service Editor’s Note: This post is written by Dave Schappell, Founder and CEO of TeachStreet. In it, he talks about his company’s transition from a free to a paid service, and shares five tips that may help other startups make the leap as well. Over the course of the last two-plus years, I’ve worked with a team that has lived the web service transition from free to paid, as TeachStreet has evolved from a place to find local classes in Seattle, to a global supplier of online and local classes (I’ve included a high-level timeline of our full 2-year transition, at the bottom of this post). The discussions around freemium and the like are numerous — I won’t bore you with additional words on those topics. I’ll assume that:

Top Three Motivators For Developers (Hint: not money!) Software has long since lost its glory-days status. We’re not the go-to field anymore. Geeks are no longer revered as gods amongst humanity for our ability to manipulate computers. We get crappy jobs just like everyone else. So, what is it that still motivates you to work as a software developer? Ah...satisfaction!

Focus Your Ambitions with the Lifehacker Hierarchy of Goals Setting goals is easy, but prioritizing them is hard. Humans suck at properly weighing what we need to achieve our goals. We take on too much, skip steps, and often, as a result, we give up. 9 basic principles of responsive web design Responsive web design is a great solution to our multi-screen problem, but getting into it from the print perspective is difficult. No fixed page size, no millimetres or inches, no physical constraints to fight against. Designing in pixels for Desktop and Mobile only is also the past, as more and more gadgets can open up a website. Therefore, let's clarify some basic principles of responsive web design here to embrace the fluid web, instead of fighting it. To keep it simple we'll focus on layouts (yes, responsive goes way deeper than that and if you want to learn more this is a good start).

A lightweight approach to ACL - The 33 lines of Magic » Debuggable Ltd Ok, I just finished a terrible (extended) weekend that featured 12 hours of CSS coding. The only reason I didn't loose my sanity was that I finally decided to figure out what the heck is wrong with IE. Those of you who have to do get their hands dirty in the field of graphics, css, and other non-php work from time to time as well, make sure to check out Position is Everything at some point, it really helped me out quite a bit so far. Anyway, that's not really what I want to talk about today.

It's not a promise, it's a guess “When is it going to be done?” is a reasonable question and we as software developers should try to come up with the best answer we can based on our experience and analysis. What we should not do, however, is treat our answer as solemn oath. When you treat estimates as promises instead of guesses, you bind your worth as a worker to it. If you do not meet your own deadline, you are a failure.

Two Lists You Should Look at Every Morning - Peter Bregman by Peter Bregman | 11:00 AM May 27, 2009 I was late for my meeting with the CEO of a technology company and I was emailing him from my iPhone as I walked onto the elevator in his company’s office building. I stayed focused on the screen as I rode to the sixth floor.

A brief history of web design for designers. Explained with animations My interest in coding my designs was lost at the the moment I realized how much trickery had to be done to make it happen. Seemingly simple issues could be solved in so many ways. Yet it still might not have worked on some browsers. One thing that always made me wonder is why there's a division between design and code. Why difficult things become more simpler, but simple things become more difficult?