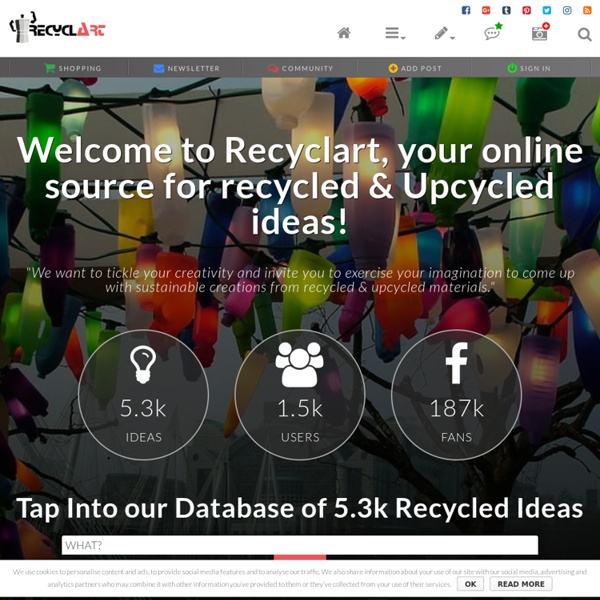 Art and the Evolution of Consciousness — Eros & Kosmos Allan Combs California Institute of Integral Studies acombs@ciis.edu Drink Can Tinwork Tinwork Embossed tinwork is sometimes used to decorate rustic style photo or mirror frames, or just to make decorative items such as Christmas tree decorations. The metal used is usually thicker (tinplate) and is normally worked with hammered tools - I wanted to try to get a similar effect, but with a bit less effort. The Most Popular ArticleOn Atomic Shrimp No, really! I created this page towards the end of October 2008.

6 Of The Best Shopping Sites For The Coolest Gadgets The following are the best shopping sites that specialize in the geekiest, funkiest and sometimes stupidest gadgets for boys and girls, old and young. So if you’re shopping for yourself, a loved one just a friend you’re bound to find something that fits. Fire up your browser and dig out your wallet ““ it’s time to put it on plastic. I Want One Of Those A very fitting name, considering the selection of products on offer. Rock Rocket Stove Is Held Together By Coat Hangers © Liz To Rocket stoves burn hot and clean, using very little wood or other combustibles. Vancouver industrial designer Liz To has designed a new version for Tibet, where they use dung as fuel. Liz notes that 1.6 million people die from indoor pollution from traditional "Three Stones" type fires every year.

Khmer/Cambodian alphabet, pronunciation and language The Khmer alphabet is descended from the Brahmi script of ancient India by way of the Pallava script, which was used in southern India and South East Asia during the 5th and 6th Centuries AD. The oldest dated inscription in Khmer, found at Angkor Borei in Takev Province south of Phnom Penh, dates from 611 AD. The Khmer alphabet closely resembles the Thai and Lao alphabets, which developed from it. Notable features This is syllabic alphabet in which each consonant has two forms, one with an inherent /a/ (first series) and one with an inherent /o/ (second series) Vowels are indicated using either separate letters or diacritics, which written above, below, in front of, after or around consonants. The pronunciation of the vowels depends on whether a consonant they are attached to is of the first or second series.

Myths About Giftedness ~ by Mary Rocamora, M.A. ~ There are many myths about the gifted that are held in the mainstream culture. They permeate conventional parenting and our educational system, including private education. Atomic Shrimp Other Projects I Have In Mind To Tackle: I want to make a machine that paints pictures - either a big paint plotter, or something that works as (some kind of) robotic analogue of the human arm. Wind turbine - I want to see if it can be done on next to no budget. Parabolic mirror array (or some kind of mirror suitable for solar experiments, including cooking) Fitness Gurus on YouTube If you’re bored of your current routine, or not producing results, or simply need an injection of motivation here’s an awesome list of fitness gurus on YouTube you should subscribe to. As a personal trainer myself, it is imperative for me to keep my skills updated and stay on top of new techniques, industry trends and all the science behind it. I subscribe to these fitness experts not only to learn something new half way around the world, but also to get inspired. John Kiefer is the most recent entry to my Fitness Gurus on Youtube list. Kiefer provides great advice, backed by research, on nutrition and training and how to optimize it for maximum results. I recently discovered Kiefer’s blog Dangerously Hardcore and had to add to my list of Top Fitness Blogs That Challenge the Status Quo.

un pompon avec un t shirt Learn how to turn old t-shirts into pom poms! T-shirt Pom Poms are so much more durable than tissue paper ones. And I think they look loads better! Mayan Numbers Count with Mayan numbers How Mayan numbers worked The Mayan system is interesting as they developed it without any contact with the other systems on this website. It is similar to the Babylonians but the Mayans chose different numbers as their bases. They used dots to represent numbers under five, so four is four dots.

Creativity across the life-span: A systems view Csikszentmihalyi, M. Talent Development III, pp. 9-18 Gifted Psychology Press 1995 This article by Mihaly Csikszentmihalyi looks at three major issues related to creativity over a lifespan. Growing Onions Vertically On The Windowsill Growing Onions Vertically On The Windowsill How nice would it be to just be able to pluck fresh green onions from the soil whenever you need them? Nothing beats fresh onions for your salads, dips or soup. 10 Rock Solid Website Layout Examples Keeping It Simple Page layout is equal parts art and science. Creating something that’s visually attractive and unique takes an artist’s eye. However, there are several very easy to follow guidelines that you can use to create solid layouts that work for any number of cases.