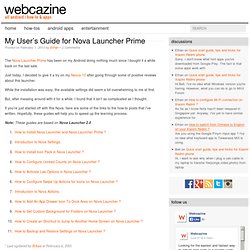 Just today, I decided to give it a try on my Nexus 10 after going through some of positive reviews about this launcher. While the installation was easy, the available settings did seem a bit overwhelming to me at first. But, after messing around with it for a while, I found that it isn’t as complicated as I thought. If you’re just started off with this Nova, here are some of the links to the how-to posts that I’ve written. Hopefully, these guides will help you to speed up the learning process.

Note: These guides are based on Nova Launcher 2.0. Make Your Notifications Less Intrusive with These Soothing Alerts. Make Your Old Phone Feel Like New This Weekend. So you've gotten off the upgrade treadmill, but you're still a little jealous of all those people getting the new iPhone 5. 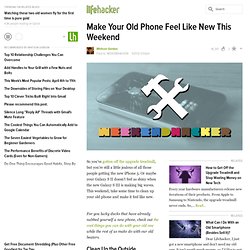 Or maybe your Galaxy S II doesn't feel as shiny when the new Galaxy S III is making big waves. This weekend, take some time to clean up your old phone and make it feel like new. P For you lucky ducks that have already nabbed yourself a new phone, check out the cool things you can do with your old one while the rest of us make do with our old beaters.P Clean Up the OutsideP SExpand Let's start with the outside. Speed Up the SoftwareP If your phone's running a little slow, you can speed it up by uninstalling old apps, freeing up some space on your hard drive or SD card, and (if you're on Android) a number of deep settings tweaks. The Stupid Things You Do With Your Smartphone (and How to Fix Them) As a new smartphone owner (I refuse to call my old Garmin a smart phone, it kinda maybe let me surf the web, no downloadable apps, and I couldn't even get java jars to work worth a damn on it...), I find that this is becoming my #1 pet peeve. 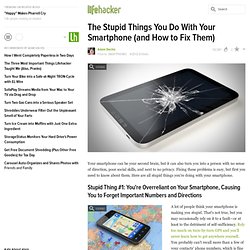 I don't really give a damn about new email, 95% of the time, I'm reading it from my computer, not my phone. And only when I want to read it, not as soon as somebody sends me something. Same with FB and Twitter. Evidently I'm too old school, I'm used to being able to read texts by just looking at my phone, and not this scroll the message in notifications and turn off the screen in one or two seconds that seems to happen.

How Can I Integrate My Smartphone into My Car on the Cheap? Phone-ify Your Computer for Considerably Improved At-Home Calls and Texts. AMOLED Displays: How It Works. You’ve heard the AMOLED term a bunch of times when looking for more information about a certain smartphone (especially an Android-powered one) or when actually talking with the in-store carrier representatives about the characteristics that differentiate various mobile devices between them. 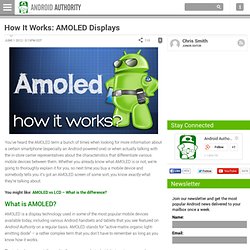 How it Works: Roaming. When choosing your next Android smartphone you should be taking into account a variety of factors before committing to a single model. 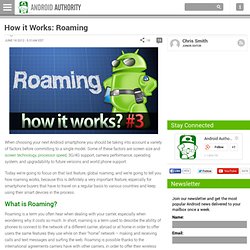 Some of these factors are screen size and screen technology, processor speed, 3G/4G support, camera performance, operating system, and upgradability to future versions and world phone support. Today we’re going to focus on that last feature, global roaming, and we’re going to tell you how roaming works, because this is definitely a very important feature, especially for smartphone buyers that have to travel on a regular basis to various countries and keep using their smart devices in the process.

What is Roaming? Roaming is a term you often hear when dealing with your carrier, especially when wondering why it costs so much. There are various types of roaming agreements between carriers, with some of them being free, but most of them will bring extra charges to your monthly cell phone bill. Image credit: mo-call.com. How To Find Your Phone When It's On Silent. How it Works: NFC (near field communication) In our fourth edition of the “How it Works” series, we’re going to talk about NFC, or near field communication, a technology that’s being adopted by more and more smartphone and tablet makers and mobile operators. 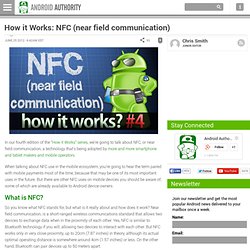 When talking about NFC use in the mobile ecosystem, you’re going to hear the term paired with mobile payments most of the time, because that may be one of its most important uses in the future. But there are other NFC uses on mobile devices you should be aware of, some of which are already available to Android device owners. What is NFC? So you know what NFC stands for, but what is it really about and how does it work?

Near field communication, is a short-ranged wireless communications standard that allows two devices to exchange data when in the proximity of each other. Intellidick.com. How To: Setup, Configure, and use Google Now. What is Google Now? There’s some confusion out there in the Android world. Google Now is not Android’s “Siri killer”, that’s Voice Search (which you can get to and use from within Google Now). Google Now is much, much more than an application that listens to queries and spits out answers. I’m not even sure we can call Google Now a virtual assistant either. Google Now is about automating your life and in return, making your life easier.

JaxtrSMS Sends Free Text Messages to Any Mobile Number in the World.