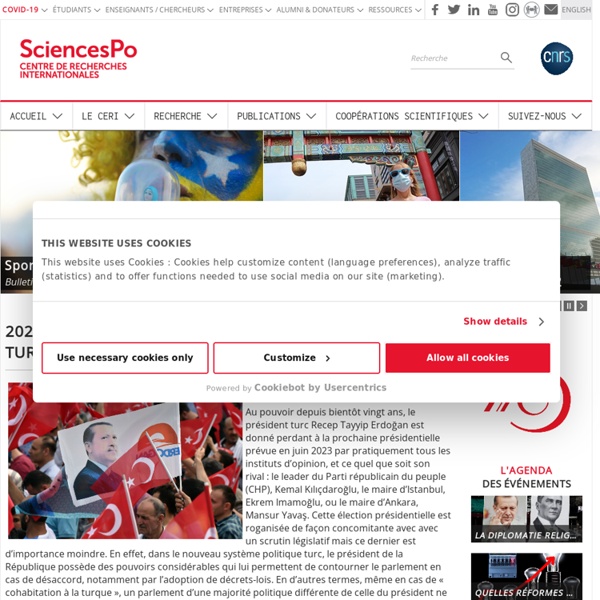 40 maps that explain the world Maps can be a remarkably powerful tool for understanding the world and how it works, but they show only what you ask them to. So when we saw a post sweeping the Web titled "40 maps they didn't teach you in school," one of which happens to be a WorldViews original, I thought we might be able to contribute our own collection. Some of these are pretty nerdy, but I think they're no less fascinating and easily understandable. Problématique de base Language Facts UNESCO's "Atlas of Languages in danger of disappearing" estimates that there are around 6000 languages spoken worldwide today. Most of these languages do not enjoy majority status. It is estimated that more than half of the world's population communicates in only 8 languages: English and Mandarin Chinese, Hindi (with Urdu), Spanish, Russian, Arabic and Bengali and finally Portuguese (ranked by proportion). The situation among the languages varies widely, with more than 3000 languages now spoken by fewer than 10000 people.

The Next Diplomatic Cable "The man who saved Iran" might be the most hyperbolic thing blogged about Jared Cohen this summer, but not by much. The huzzahs that greeted the news that the 28-year-old State Department staffer called on Twitter to delay a service blackout during the height of the Tehran street protests threatened to obscure the true complexity of Foggy Bottom's new, technology-enabled approach to diplomacy. Secretary of State Hillary Clinton spoke of it herself in a commencement speech at Barnard College on May 18. "With social-networking tools that you use every day to tell people you've gone to get a latte or that you're going to be running late," she said, "you can unite your friends through Facebook to fight human trafficking." The State Department calls this new technology-driven approach "21st-century statecraft."

Berners-Lee on the read/write web In August 1991, Sir Tim Berners-Lee created the first website. Fourteen years on, he tells BBC Newsnight's Mark Lawson how blogging is closer to his original idea about a read/write web. Mark Lawson: Because of your invention, I was able to look up every article written by or about you quickly and easily. But at the same time, I was sent several unsolicited links to porn sites. I have to accept that someone in Mexico may have stolen my identity and now be using it. Durham University E-theses Number of theses: 7248. Doctoral Abaza-Stauth, Mona (1985) Women between economic liberalization and social deprivation: a case study in rural Egypt. Doctoral thesis, Durham University. Abbott, Richard Bruce (1983) Calculations in supersymmetric quantum theories. Doctoral thesis, Durham University.

Friends and enemies in the Middle East. Who is connected to whom? - interactive As the US and UK are set to again commit to military involvement in the Middle East, this interactive visualises the intricate, complex and sometimes hidden relationships and alliances across the region. Its tangled, opened state is meant as a kind of visual joke, showing how its fabric defies simple solutions. You can filter relationship types ‘on’ and ‘off’ in the bottom left and also rollover and click on different players to get a clarified view. Understandably, this is an ongoing, evolving diagram which we hope to add to. So feel free to help us make this diagram more accurate.

My Name, My Language, My Internet: IDN Test Goes Live ICANN is celebrating the ability of people to get "My name, My Language. My Internet" wiki pages with the launch of the IDN evaluation with T-Shirts displaying example.test in the 11 languages. MARINA DEL REY, Calif.: Internet users around the globe can now experiment with their name in their language on their Internet with today’s launch of the Internet Corporation for Assigned Names and Numbers live testing of Internationalized Domain Names in 11 languages. "This is one of the most exciting times yet in the development of IDNs," said Dr Paul Twomey, ICANN’s President and CEO. "Internet users who speak the 11 languages of the test can play a key role in testing how IDNs operate, and help us move toward full implementation for all the languages of the world." ICANN has also put a video explaining the evaluation process on YouTube, and available on the ICANN website.