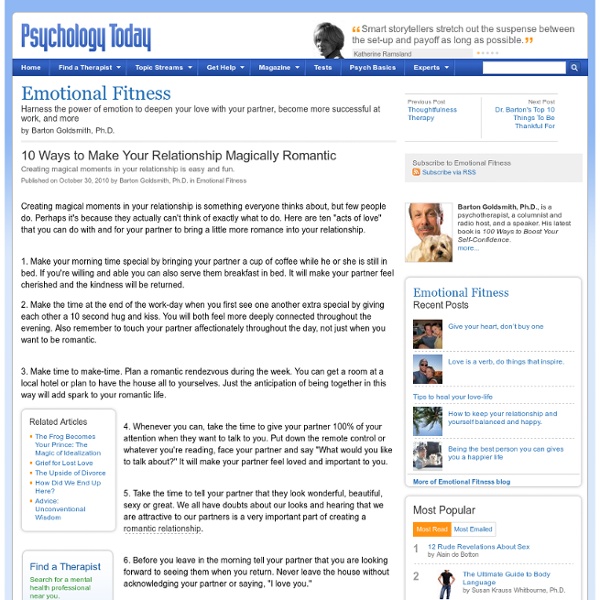 Creating magical moments in your relationship is something everyone thinks about, but few people do. Perhaps it's because they actually can't think of exactly what to do. Here are ten "acts of love" that you can do with and for your partner to bring a little more romance into your relationship. 1. 2. 3. 4. 5. 6. 7. 8. 9. 10. Don't try to do everything on this list in the same weekend, one a month is plenty. Taking the time to create romance in your relationship is paramount to creating a fulfilling love life. Dr. Related:  Realtionships

Government Surplus Auctions - GovDeals.com www.cs.virginia.edu/~an4m/fun/thoughtful-look A Thoughtful Look at Men and Women SHE DRIVES FOR A RELATIONSHIP. HE'S LOST IN THE TRANSMISSION By DAVE BARRY CONTRARY to what many women believe, it's fairly easy to develop a long-term, stable, intimate, and mutually fulfilling relationship with a guy. Of course this guy has to be a Labrador retriever. Psychological ("personality") Types Psychological ("personality") Types According to Jung's theory of Psychological Types we are all different in fundamental ways. One's ability to process different information is limited by their particular type. These types are sixteen. People can be either Extroverts or Introverts, depending on the direction of their activity ; Thinking, Feeling, Sensing, Intuitive, according to their own information pathways; Judging or Perceiving, depending on the method in which they process received information. Extroverts vs. Extroverts are directed towards the objective world whereas Introverts are directed towards the subjective world. Sensing vs. Sensing is an ability to deal with information on the basis of its physical qualities and its affection by other information. Thinking vs. Thinking is an ability to deal with information on the basis of its structure and its function. Perceiving vs. Perceiving types are motivated into activity by the changes in a situation. ENTp , ISFp , ESFj , INTj , ENFj

Sex Tips - Relationship Advice at WomansDay.com You’ve heard all about the benefits of having sex—it can improve your health, help you sleep and, obviously, strengthen your relationship. And the best way to have more sex is to ask for it. But for some women, that’s easier said than done. It may be because you can’t figure out a way to get the message across, or you’re exhausted, shy or just plain out of practice, says Aline Zoldbrod, Ph.D., sex therapist and author of Sex Talk. 1. Sometimes, saying, “I want you, now” out loud can feel intimidating or embarrassing, especially if that kind of talk doesn’t come naturally to you, says Tammy Nelson, Ph.D., a couples and sex therapist and author of Getting the Sex You Want. 2. Between the two of you, come up with a word or phrase that is a secret call for sex. 3. When it comes to summoning sex, getting yourself in the mood is half the battle. 4. If verbal requests for sex are out of your comfort zone, don’t worry: non-verbal initiation can be just as powerful. 5. 6. 7. 8. 9.

Samurai Appliance Repair Man: Appliance Repair Wisdom for the Ages: Appliance Repair Revelation: Removing the Agitator from Your Washing Machine Trying to remove the agitator from your top-loading washing machine but feeling, instead, like you're failing miserably at an I.Q. test for nitwits? Fear not, my mentally-challenged grasshopper, for the Samurai shall illumine your murky path. GE Old Style Washer: Remove agitator cap by pulling it off and look for a bolt, remove the bolt and pull up hard on the agitator. Not all models of this style washer has a retaining bolt. Picture. GE New Style Washer: Use a old dryer belt or rope to help remove the agitator. Whirlpool and Kenmore Direct Drive Washers: Remove the agitator cap, some caps unscrew and some will just pull off. Maytag Dependable Care Washer: Locate a 1/4 inch screw on the side of the agitator, ( about 3/4 of the way down) remove this screw and lift up on the agitator. Maytag Atlantis and Performa: Remove the cap and softener dispenser by pulling it off and locate the agitator bolt. To learn more about your washer or to order parts, click here. 6 Comments: didn't work man.

Wal-Mart You Don't Know A gallon-sized jar of whole pickles is something to behold. The jar is the size of a small aquarium. The fat green pickles, floating in swampy juice, look reptilian, their shapes exaggerated by the glass. It weighs 12 pounds, too big to carry with one hand. The gallon jar of pickles is a display of abundance and excess; it is entrancing, and also vaguely unsettling. This is the product that Wal-Mart fell in love with: Vlasic's gallon jar of pickles. Wal-Mart priced it at $2.97--a year's supply of pickles for less than $3! Therein lies the basic conundrum of doing business with the world's largest retailer. Indeed, as Vlasic discovered, the real story of Wal-Mart, the story that never gets told, is the story of the pressure the biggest retailer relentlessly applies to its suppliers in the name of bringing us "every day low prices." Wal-Mart is not just the world's largest retailer. number-two retailer Home Depot sells in a year. Steve Dobbins has been bearing the brunt of that switch.

www.menshealth.com/mhlists/fighting_strategies/printer.php Truly passionate sex beats obligatory makeup sex any day. Maybe men don't feel the difference, but we women do. We hate fighting—it makes us feel alienated, confused, and downright disappointed. But the next time we bite your head off, don't rush to pack up your CDs. Experts insist that squabbling (but not screaming) is a healthy sign. It's silence that should scare you. You need to know what her fighting words mean. The Attention Fight Opening Volley: "We don't go out anymore." It Means: She's nostalgic. Battle Tactics: Once a month, surprise her with a real plan. What You Win: Dinner counts as foreplay. The Friends Fight Opening Volley: "What's with the morons in your fantasy baseball league, anyway?" It Means: She's questioning your judgment. Battle Tactics: When she disses your buds, it feels like a personal insult, because friends are directly tied to identity and ego. What You Win: Peace. The Money Fight Opening Volley: "Do you really need another gadget?" The Intimacy Fight

Relationship Rules Human beings crave intimacy, need to love and be loved. Yet people have much trouble doing so. It's clear from the many letters I get that lots of folks have no idea what a healthy relationship even looks like. Because I care about these things, and care about the environments children grow in, I'm using this space as an attempt to remedy the problem—again. From many sources and many experts, I have culled some basic rules of relationships. This is by no means an exhaustive list. Choose a partner wisely and well. Top 100 Love Quotes - Top One Hundred Love Quotes and Sayings Top 10 Love Quotes at 1-Love-Quotes.com Follow @1lovequotescom The following is 1-Love-Quotes users' selection of the Top 100 Love & Romance quotes of all time! This selection process included over four million users submitting their favorite Love Quotes. 1. Henry David Thoreau - Deeply in love with a woman named Ellen, whom his own brother John also loved, Henry David Thoreau penned this line in his journal on July 25th in the 1830s. 2. Love itself is what is left over when being in love has burned away, and this is both an art and a fortunate accident. Louis De Bernieres - Written by British novelist Louis De Bernieres, this quote flows from the pages of his most famous literary work, “Captain Corelli’s Mandolin.” 3. Margaret Anderson was editor and founder of The Little Review, a literary magazine that published the works of many American, English, and Irish writers in the early 1900s. 4. Janos Arany - Hungarian poet Janos Arany is widely considered the “Shakespeare of ballads.” 5.

Free Campgrounds for RVs my bus 1999 Neoplan conversion, with whole house Solar, Detroit Diesel, self contained Hedgehog's dilemma Both Arthur Schopenhauer and Sigmund Freud have used this situation to describe what they feel is the state of individual in relation to others in society. The hedgehog's dilemma suggests that despite goodwill, human intimacy cannot occur without substantial mutual harm, and what results is cautious behavior and weak relationships. With the hedgehog's dilemma, one is recommended to use moderation in affairs with others both because of self-interest, as well as out of consideration for others. The hedgehog's dilemma is used to explain introversion and isolationism. Schopenhauer[edit] The concept originates in the following parable from the German philosopher Arthur Schopenhauer's Parerga und Paralipomena, Volume II, Chapter XXXI, Section 396:[1] A number of porcupines huddled together for warmth on a cold day in winter; but, as they began to prick one another with their quills, they were obliged to disperse. Freud[edit] Social psychological research[edit] References[edit]