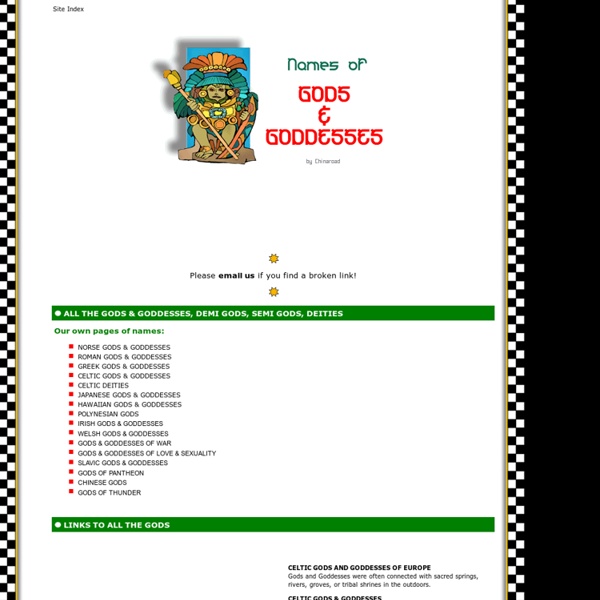 Sunglasses from empty toilet paper rolls Are you ready for the summer? Be a sunglasses designer Have a look at this easy way to make your own sunglasses. They become very beautiful if you apply glittering stickers and colour them with felt-tip pens. When you roll the middle part, glue it to stay in place. Glue the temples too, after you fold them (see the pictures). See more toilet paper rolls ideas in KROKOTAK: God.com The following site offers information about God and direction in finding Him. There are over six billion people in this world and each person has his or her own thoughts about God. How can a person know for sure what He is really like? At some point in your life, you may have some of the following questions: Does God exist? Is there a heaven and hell? God.com features books and offers other information to help you find answers to these questions and more.

Greek Gods and Goddesses 316Google + "Whoever obeys the gods, to him they particularly listen." --Homer, The Iliad The gods of ancient Greece, most of whom were adopted by the ancient Romans, were generally described as human in form, unaging, nearly immune to all wounds and sickness, capable of becoming invisible, able to travel vast distances almost instantly, and able to speak through human beings with or without their knowledge. Each Greco-Roman divinity has his or her own specific appearance, genaeology, interests, personality, and area of expertise, subject to significant local variants. The deities of ancient Rome were based in the Greek pantheon, but also included gods and goddesses incorporated from other cultures (such as Egyptian and Persian) and divinities associated with the Roman state. Sponsored Links

Write in Runes You can write your name or other words in the runes of the Elder Futhark by using the javascript transliterator below. Tips: Write phonetically, and skip doubled letters and silent letters. Examples: "Chrissy" should be written "KRISY". CH, as in "Chuck", will appear as Kenaz Jera. The javascript does not insert spaces or punctuation. Type a word or name into the form below and hit the Translate button. Letters: Runes: Characters: The rune symbols are individual GIF files. This brilliant javascript was created by Daniel Jakobsson and used on this website with his permission. ©2003 Daniel Jakobsson (Email fake_healer@hotmail.com)

60 Awesome Search Engines for Serious Writers June 20th, 2010 Finding the information you need as a writer shouldn’t be a chore. Luckily, there are plenty of search engines out there that are designed to help you at any stage of the process, from coming up with great ideas to finding a publisher to get your work into print. Professional Find other writers, publishers and ways to market your work through these searchable databases and search engines. Writing These helpful tools will help you along in the writing process. WriteSearch: This search engine focuses exclusively on sites devoted to reading and writing to deliver its results.The Burry Man Writers Center: Find a wealth of writing resources on this searchable site.Writing.com: This fully-featured site makes it possible to find information both fun and serious about the craft of writing.Purdue OWL: Need a little instruction on your writing? Research Try out these tools to get your writing research done in a snap. Reference Need to look up a quote or a fact? Niche Writers Books Blogging

God In America: Watch the Full Program Online Puritan "city on a hill" beckoned on the horizon of the New World, religious faith and belief have forged America's ideals, molded its identity and shaped its sense of mission at home and abroad. For the first time on television, God in America explores the tumultuous 400-year history of the intersection of religion and public life in America, from the first European settlements to the 2008 presidential election. Interweaving documentary footage, historical dramatization and interviews with religious historians, the six-part series is narrated by actor Campbell Scott and includes appearances by actors Michael Emerson (as John Winthrop), Chris Sarandon (as Abraham Lincoln. and Keith David (as Frederick Douglass), among others. "The American story cannot be fully understood without understanding the country's religious history," says series executive producer Michael Sullivan.

Earth Mysteries: Stonehenge and the Druids, Salisbury Plain, Wiltshire - Earth Mysteries Stonehenge and the Druids, Salisbury Plain, Wiltshire After centuries of neglect in the wake of first Roman and then Christian suppression, the Druids were rediscovered during the Renaissance when the revival of interest in ancient Greek and Latin writers brought attention to the works of Pliny, Tacitus, and Julius Caesar and their descriptions of the Celtic world. First in France in the sixteenth century, and then in England, the ancient Celts (or Gauls as they were known in France) and Druids were claimed as historical ancestors. In England as early as 1624 the Celtic warrior queen Boudicca is credited by Edmond Bolton with building Stonehenge as her monument. Druids celebrating the summer solstice at Stonehenge Already by 1649, John Aubrey had suggested that the Druids were probably responsible for building Stonehenge, a theme he developed into a book originally to be titled 'Templa Druidum' but which ultimately formed a chapter in his "Monumenta Britannica".

ASBH Home Page Ár nDraíocht Féin: A Druid Fellowship The definitive glossary of hacking terminology We live in an era of unprecedented cyberattacks, where malicious campaigns, both personal and governmental, are carried out across laptops and wireless networks. Even if you are not technically minded, your day-to-day life is still probably pretty crowded with stories about hacking, whether you recognize them as such or not. Have you ever installed an antivirus tool on your computer? Read a story about WikiLeaks or the Arab Spring? Opened a bank account? We’ve put together a glossary of what we believe to be the most important and current hacking terms you should know. Adware: Adware can mean the software that automatically generates advertisements in a program that is otherwise free, such as an online video game. Anonymous: A non-hierarchical hacktivist collective, Anonymous uses hacking (and arguably cracking) techniques to register political protest in campaigns known as “#ops.” Code: Code is the machine-readable, usually text-based instructions that govern a device or program.