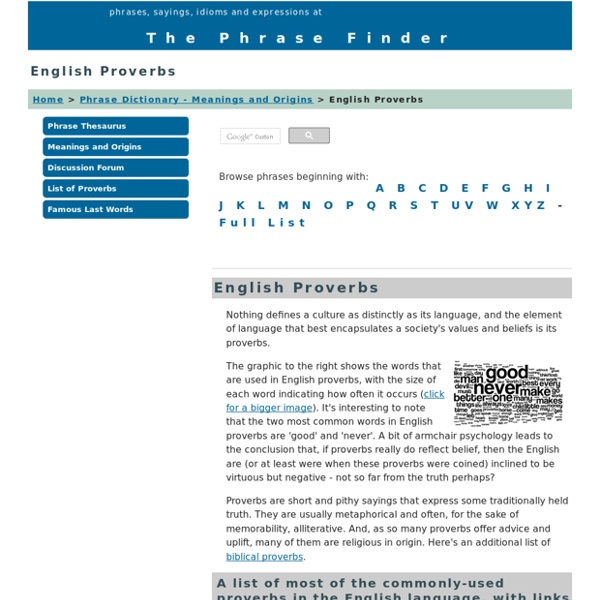 Nothing defines a culture as distinctly as its language, and the element of language that best encapsulates a society's values and beliefs is its proverbs. The graphic to the right shows the words that are used in English proverbs, with the size of each word indicating how often it occurs (click for a bigger image). It's interesting to note that the two most common words in English proverbs are 'good' and 'never'. A bit of armchair psychology leads to the conclusion that, if proverbs really do reflect belief, then the English are (or at least were when these proverbs were coined) inclined to be virtuous but negative - not so far from the truth perhaps? Proverbs are short and pithy sayings that express some traditionally held truth. They are usually metaphorical and often, for the sake of memorability, alliterative. Many proverbs have been absorbed into English having been known earlier in other languages. A barking dog never bites A bird in the hand is worth two in the bush Less is more Related:  Proverbs : Universal Gems of Wisdom!

Meaning and/or origin of Proverbs, Adages and Sayings People have often written in requesting the meaning and/or origin of a proverb, adage or saying. Therefore I have commenced recording the items that have been the subject of questions. There is far too much work to go through and write meanings to all of the proverbs listed on the Save the Proverbs page, and many of you will know the meaning of most proverbs. From many of the questions I receive I rather imagine the sender has grown up in a city or else they would have known the meaning. I had only heard a small portion of the proverbs when I commenced the page, but I have no trouble in understanding the meaning of them. We should not blindly hold on to any specific proverb. If you have a question please email me and I will answer your question direct by email plus include the answer in this list.

CALLIHOO Writing Helps--Feelings Table Character Feelings You can describe your character's feelings in more exact terms than just "happy" or "sad." Check these lists for the exact nuance to describe your character's intensity of feelings. SF Characters | SF Items | SF Descriptors | SF Places | SF EventsSF Jobs/Occupations | Random Emotions | Emotions List | Intensity of Feelings Proverbs and Sayings WEATHER SAYINGS Weather lore: What's the science ? (BBC) "Will it rain on your picnic/camping trip/festival? Old weather sayings may sound like fanciful folklore, but some can help amateur forecasters. Unusual Words Unusual Words A by no means exhaustive list of rare, obscure, strange and sometimes funny words and their meanings that only seem to crop up in crosswords and dictionaries. Words that are used so seldom, you wonder who invented them and why. Home ~ The Stories ~ Diversions ~ Links ~ Contact

Proverbs Short traditional saying that expresses a perceived truth A proverb (from Latin: proverbium) is a simple, concrete, traditional saying that expresses a perceived truth based on common sense or experience. Proverbs are often metaphorical and use formulaic language. Some proverbs exist in more than one language because people borrow them from languages and cultures similar to theirs. Definitions[edit] Lord John Russell (c. 1850) observed poetically that a "proverb is the wit of one, and the wisdom of many There are many sayings in English that are commonly referred to as "proverbs", such as weather sayings. In other languages and cultures, the definition of "proverb" also differs from English. There are also language communities that combine proverbs and riddles in some sayings, leading some scholars to create the label "proverb riddles".[15][16][17] Examples[edit] "Pearls before Swine", Latin proverb on platter at the Louvre Sources[edit] "Who will bell the cat?" Interpretations[edit] Use[edit]

Novel Writing: 7 Simple Ways to Make a Good Story Great Whenever I think of the word gatekeeper, a little film clip from The Wizard of Oz starts up in my head, where the fearsome palace guard denies Dorothy and friends access to the Wizard. “The Wizard says, ‘Go away!’” If aspiring authors are Dorothy, agents and editors are that guy. Except remember what happens? Thus the great secret is revealed: You don’t have to do anything but tell a fabulous story to make them love you. There are subtle differences between fiction that’s passable and fiction that pops—fiction that shows that you know what you’re doing. Here are seven ways successful authors make their stories crackle with authority and get the gatekeepers on their side. 1. Most writers know enough to put in sensations beyond sight and sound. Agents and editors love the five senses, but they want and expect more. Here’s the key: The best authors use body language in their narratives. Begin by reading up on body language. Consider this: Brian paused and lit a cigarette. 2. 3. 4. 5. 6. 7.

Native American Proverbs and Wisdom by Liz Olson With a long history, rich culture, and more than 300 spoken languages, the wisdom of Native American tribes has been passed down through the centuries. Don't be afraid to cry. It will free your mind of sorrowful thoughts. - Hopi Day and night cannot dwell together. - Duwamish It is better to have less thunder in the mouth and more lightning in the hand. - Apache They are not dead who live in the hearts they leave behind. - Tuscarora All plants are our brothers and sisters. Tell me and I'll forget. When we show our respect for other living things, they respond with respect for us. - Arapaho If we wonder often, the gift of knowledge will come. - Arapaho Most of us do not look as handsome to others as we do to ourselves. - Assiniboine What is life? When you were born, you cried and the world rejoiced. Those who have one foot in the canoe, and one foot in the boat, are going to fall into the river. - Tuscarora The weakness of the enemy makes our strength. - Cherokee

50 of the Best Websites for Writers There are tons of reference sites on the web that can help you find a job or write a poem, essay or story. Here is a list of the best 50 websites for writers. Reference Websites Merriam-Webster Online - Merriam Webster is the perfect place to look up words and find information. The site offers a dictionary, thesaurus, encyclopedia, podcasts, word games and a lot of other things that may be of interest to writers and word-lovers. Bartleby - This site is good if you need a quote or if you want free access to encyclopedias, dictionaries, thesauri, and other reference books. General Writing Websites Writer's Digest - Probably one of the best all-around websites for writers, Writer's Digest offers information on writing better and getting published. Fiction Writing Websites About.com - About.com publishes a Guide to Fiction Writing with general information about fiction writing and a number of community forums for both current and aspiring writers. Nonfiction Writing Websites

Proverbs and Sayings A proverb is a saying that can be one or two lines long, which is generally known among the people. A proverb expresses truth, wisdom or a lesson on morality based upon common sense and practical experience. Every culture in the world have their own heritage of proverbs that are often spread to other cultures as well, an example of this is the Bible which has spread many proverbs among its followers around the world. Here we have listed out some of the most common proverbs and their meaning - "A chain is only as strong as its weakest link." A team or group is only as strong as its weakest member. "A picture is worth a thousand words." A picture or photograph can often convey a message in a more empathetic way than just words. "Absence makes the heart grow fonder." People have a tendency to think more often about someone who is away from them, making them feel fonder of the other person. "Actions speak louder than words." "All good things must come to an end." "Better late than never." 1. 2. 3.

The Best Story Structure Tool We Know By Glen C. Strathy Of the various story structure models or theories that exist, we have chosen to focus mainly on Dramatica, which was developed by Melanie Anne Phillips and Chris Huntley. We chose to work with this model because it is the only one that... 1. Addresses all aspects of story structure simultaneously and in an integrated way, including not just plot and character but also theme (something most models barely touch on). 2. 3. 4. What's more, Dramatica embodies certain insights into story structure that no other theory does. The aim of this website is to present practical tips and exercises to help writers, while avoiding a lot of theory. Finding A Roadmap For Creating Your Novel The most important thing you need from any story theory is help creating a good roadmap for your novel. Specifically, you want help creating a plot that will keep the reader engaged and bring the story to an emotionally satisfying conclusion. Traditional Story Theory Is Too General 1. 2. 3. 1. 2. 3. 4. 5.

The 50 most important English proverbs The 50 most important English proverbs What are proverbs? Every culture has a collection of wise sayings that offer advice about how to live your life. These sayings are called "proverbs". How can you use proverbs to learn English? It's good to know the really common English proverbs because you hear them come up in conversation all the time. You know what they say: when the going gets tough... (Read #5 below to learn the rest of this proverb and what it means.) Learning proverbs can also help you to understand the way that people in English-speaking cultures think about the world. Proverbs can also give you good example sentences which you can memorize and use as models for building your own sentences. The most important English Proverbs This is a list of some of the most important and well-known English proverbs. The meanings of some of these phrases have shifted over the years, so a proverb might have originally had a different meaning than the one I explain. Print this List

English Proverbs and Proverb Humor English Proverbs and Proverb Humor (revised 6 June 2003) Proverbs A stumble may prevent a fall All good things come to those who wait Everyone must row with the oars he has Every path has its puddle God tempers the wind to the shorn lamb One of these days is none of these days Revenge is a dish best served cold Worry often gives a small thing a big shadow See also Weather Proverbs (external) Beauty without grace is like a hook without bait. Caught between a rock and a hard place Caught between the devil and the deep blue sea (to be stuck with two choices that are both undesirable) Out of the frying pan and into the fire (to go from a bad to a worse situation) Might as well be hanged for a sheep as a lamb (if you're going to get into the same amount of trouble, you might as well commit the greater offense) Six of one, half a dozen of the other (each choice is really the same thing) Two sides of the same coin (two aspects of a situation that are connected by necessity) Contrary Proverbs Cf.

Go Proverbs! Proverb Laboratory: Posters See a pin and pick it up:all the day you'll have good luck. (English proverb) The source for the proverb is English Proverbs and Proverbial Phrases by William Carew Hazlitt (GoogleBooks). It is also included in the Oxford Dictionary of Proverbs, edited by Jennifer Speaker. The poster is made with AutoMotivator.