WISDOM OF THE TAROT...

Reinventing The Body, Resurrecting the Soul. In this life-changing course, Deepak Chopra reveals "the forgotten miracle"--the body's infinite capacity for change and renewal. 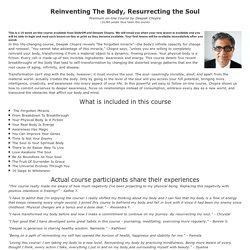 "You cannot take advantage of this miracle," Chopra says, "unless you are willing to completely reinvent your body, transforming it from a material object to a dynamic, flowing process. Your physical body is a fiction. Every cell is made up of two invisible ingredients: awareness and energy. This course details five recent breakthroughs of the body that lead to self-transformation by changing the distorted energy patterns that are the root cause of aging, infirmity, and disease. Transformation can't stop with the body, however; it must involve the soul. 10 Steps to Wholeness Actual course participants share their experiences "This course really made me aware of how much negativity I've been projecting to my physical being.

Strength (Tarot card) Strength (VIII) Strength is a Major Arcana Tarot card, and is numbered either XI or VIII, depending on the deck. 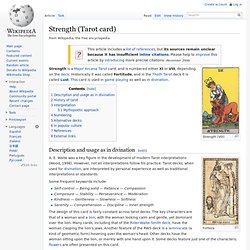 Historically it was called Fortitude, and in the Thoth Tarot deck it is called Lust. This card is used in game playing as well as in divination. Strength Tarot Card - Meaning, timing, & more! Energy · Facing problems · Strengh · Vitality · Willpower Strength Tarot card Strength's Meaning Strength is the rawest form of power, and you possess it in some form. 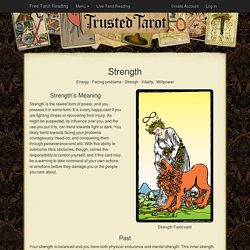 It is a very happy card if you are fighting illness or recovering from injury. As might be suspected, its influence over you, and the use you put it to, can trend towards light or dark. Past Your strength is balanced and you have both physical endurance and mental strength. Present Do not turn down any offers that will change your future. Future There is a strong, energetic release in your future which will lead you into major life changes. Yes / No Key Interpretation The Strength card shows a presence of self-assurance and confidently facing problems in your life. TAROT - The Royal Road: 8 STRENGTH VIII. KEYWORDS:Inner-balance, control, strength, inner-strength, force, serpent power, openness, endurance, overcoming materialism, courage, love, patience, goodness, self control, reconciling the passions, vision, energy, motivation, action, balance, success. 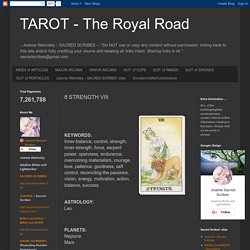 ASTROLOGY:Leo PLANETS:Neptune Mars GNOTHOLOGY:Executive power and ability CORRESPONDING RUNE:Uruz CORRESPONDING I CHING:Prosperity DIVINITORY MEANING:The need for strength, courage and self-discipline and the potential for moral victory and mastery of life. Rohit Arya_Sacred India Tarot#Creating the Strength card. The Strength card in the Sacred India Tarot was always going to be Durga – she who rides a lion. 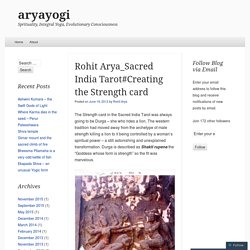 The western tradition had moved away from the archetype of male strength killing a lion to it being controlled by a woman’s spiritual power – a still astonishing and unexplained transformation. Durga is described as Shakti rupena the “Goddess whose form is strength” so the fit was marvelous. Rohit’s Notes: The article we attach should give you some interesting ideas. There is a literal embarrassment of riches where sculpture is concerned, so we send you a few choices. Correspondence: Jane – June 2002 “I would like Rohit’s further notes on Durga. Correspondence: Rohit. Tara Greene,Tarot, Astrology, Psychic and everything you need. It’s July 4th the U.S. 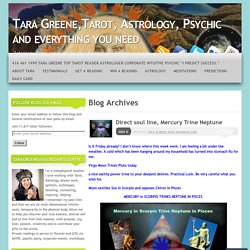 Independence Day Birthday. 237 years young. But in Astrology Terms the U.S., like any individual has its birthday when the Sun reaches the same degree it was at in the natal birth chart. The U.S. birth chart is a hotly debated topic by astrologers, varying the times of day on July 4th or even saying it occurred on different days than the signing of the declaration of Independence. So the real Sun’s return or Solar Return for the U.S. happens on Friday July 5 at 12:22 am EDT The U.S. is 237 years old and the planet mercury makes a synodic return once every 79 years, in other words like a birthday cycle. Tarot- Book of Shadows. According to Tarot historian Tom Tadfor Little, traditional playing cards were first seen in Europe in 1375, having been brought over from the Islamic societies where they had been used for centuries before that. 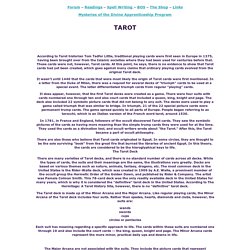 These cards were not, however, Tarot cards. At this point, he says, there is no evidence to show that Tarot cards had yet been created, which goes against many claims that ordinary playing cards evolved from the original Tarot deck. It wasn't until 1440 that the cards that were most likely the origin of Tarot cards were first mentioned. In a letter from the Duke of Milan, there was a request for several decks of "triumph" cards to be used at a special event. The letter differentiated triumph cards from regular "playing" cards. Angel Number 111 Meaning. Significance & Meaning Of Angel Number 111 Angel number 111 means manifestation and prosperity – it’s a very powerful number relating to your thoughts becoming your reality. 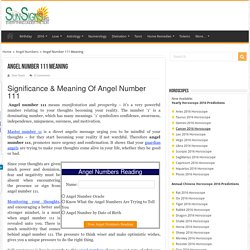 The number ‘1’ is a dominating number, which has many meanings. ‘1’ symbolizes confidence, awareness, independence, uniqueness, sureness, and motivation. Master number 11 is a direct angelic message urging you to be mindful of your thoughts – for they start becoming your reality if not watchful. Therefore angel number 111, promotes more urgency and confirmation. It shows that your guardian angels are trying to make your thoughts come alive in your life, whether they be good or bad. Since your thoughts are given much power and dominion, fear and negativity must be absent when encountering the presence or sign from angel number 111.

Monitoring your thoughts, and encouraging a better and stronger mindset, is a must when angel number 111 is revealed unto you. Angel Number 111 Meaning. Archangel Oracle ~ Divine Guidance. Daily Angel Card, from Angel Tarot Cards by Doreen Virtue and Radleigh Valentine ~ The Magician Archangel Raziel: The Magician: “You are ready! 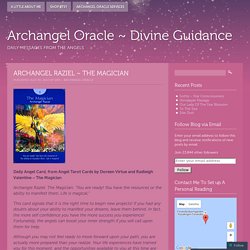 You have the resources or the ability to manifest them. Life is magical.” This card signals that it is the right time to begin new projects! If you had any doubts about your ability to manifest your dreams, leave them behind. Although you may not feel ready to move forward upon your path, you are actually more prepared than your realize. Additional meanings of this card: No more procrastination! Archangel Raziel is the wizard-like angel of spiritual secrets and mysteries who will open doors of opportunity for you. And Here I am excited to share my brand new blog with you! Connecting with the Angels every day will hold me accountable from now on, and I am hoping I can help you to be accountable too. 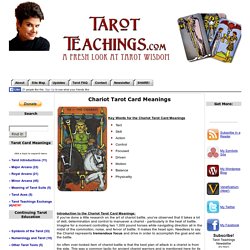 Imagine for a moment controlling two 1,000 pound horses while navigating direction all in the midst of the commotion, noise, and fervor of battle. It makes the head spin. Needless to say the Chariot represents tremendous focus and drive in order to accomplish the goal and win the battle. An often over-looked item of chariot-battle is that the best plan of attack in a chariot is from the side. This was a common tactic for ancient chariot warriors and is mentioned here for its symbolic meaning. Close your eyes and let your imagination wander to the days of when chariots were the ultimate form of transportation. Rohini Nakshatra characteristics, Career, Padas, Remedies. Rohini – The Chariot Rohini (10.00-23.20 Taurus) is a bright pale rose star – the Aldebaran. Rohini is ruled by Brahma, Prajapati, or the Creator. Rohini is the wife of the Moon. Aldebaran happens to be one of the brightest stars in the celestial firmament, and was thought of as the abode of Brahma.