Are You Ready Series: Pandemic Preparedness 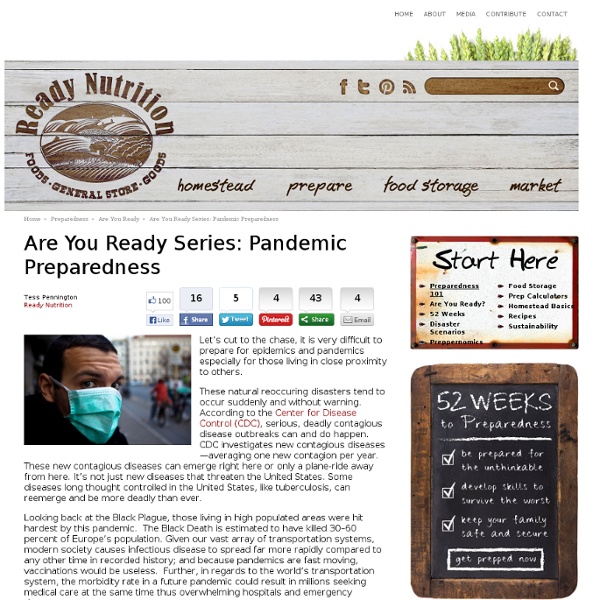 Let’s cut to the chase, it is very difficult to prepare for epidemics and pandemics especially for those living in close proximity to others. These natural reoccurring disasters tend to occur suddenly and without warning. According to the Center for Disease Control (CDC), serious, deadly contagious disease outbreaks can and do happen. CDC investigates new contagious diseases—averaging one new contagion per year. These new contagious diseases can emerge right here or only a plane-ride away from here. Looking back at the Black Plague, those living in high populated areas were hit hardest by this pandemic. Many believe the misuse of antibiotics in the past has led to the dangers of super bugs such as the spread of MRSA — or methicillin-resistant Staphylococcus aureus. Before we get into the meat and potatoes of pandemic preparedness, let’s look at the changes that will likely occur in your community if this disaster were to occur: Community Preparedness Will Play a Large Role Source Google+

Deluxe Pandemic Kit for 3-Person Family: Health & Personal Care Pandemic Watch: Another insider announces that a global pandemic is imminent Janet C. Phelan Dr. Quoted in an article in US News onDecember 24, Dr. Through his declaration of the imminent nature of a pandemic, Kim adds his name to a growing list of insiders who are stating that we are shortly facing a disease event of a global magnitude. At the very time that our attention is focused on the possibility of losing our rights to defend ourselves via our potential loss of our second amendment rights, the insidious possibility of a global pandemic is lurking....well, right under our pavement. The possibility for utilization of the water system as a delivery system for a pandemic-type agent remains salient. Truthfully, I prefer the word “genocide” to “population reduction.” Dr. Merck has been under scrutiny for a number of years for problems with its products, including drugs such as Temodar, PegIntron, and Intron A. Inovio continues to partner with Merck, according to the Inovio website. Dr. Dr. Read other articles by Janet Phelan Here

The hepatitis C study America never heard about - The Berkson Clinical Study (NaturalNews) If someone were to take a look at the impressive credentials of Dr. Burton Berkson they would likely think that any study he conducted would easily find its way to publication - especially one which demonstrated remarkable success against chronic hepatitis C. Such was not the case with the Berkson Clinical Study in the U.S., despite Dr. Berkson's credentials. Instead, the U.S. study ended up being published in the German medical journal Medizinishche Klinik. A sample of Dr. Assist. Why the study wasn't published in the U.S. The last two items in the credentials may give a hint of why Berkson's study was never published in America. Antiviral treatment costs range well upwards of tens of thousands of dollars annually. The Berkson Clinical Study The patients also took vitamins B, C, and E and a mineral supplement each day. The patients The results From the study's conclusion: Sources: Mr.

Polish study: Vaccines carry the potential to do tremendous harm‏ The authors of this powerful new review wrote: “It is not reasonable to assume that manipulation of the immune system through an increasing number of vaccinations during critical periods of brain development will not result in adverse neurodevelopmental outcomes.” Here’s what they found. A new scientific review from Poland discusses irreparable harm done by vaccines. This review addresses the issue in terms of adverse effects, immune system effects, neurological symptoms following vaccination, and a history of vaccines demonstrating little benefit. Adverse Effects Different systems of defining types of vaccination adverse events include dividing between immune system and nonimmune system, or classifying according to whether they’re local, general, shortly after vaccination, or develop more slowly. Their study leaves little doubt that vaccines produce serious risks that are entirely out of line with any benefits gained. Immune System Effects They go on to state that: They state that:

Risk of Human-to-Human Spread of Deadly New Bird Flu Virus Higher Than Previously Thought Before this year the H7N9 bird flu virus linked to 133 human infections and 43 deaths was never seen in people. All the available evidence suggests that an effective biological barrier apparently kept a pandemic at bay—humans only contracted the novel virus via direct contact with poultry or environments such as live bird markets rather than by human-to-human transmission. New analysis from the Chinese Academy of Agricultural Sciences (CAAS), however, suggests that the virus is closer to becoming a disease transmitted among humans than previously thought. A large study comparing the genomes of the five reported human H7N9 strains with 37 H7N9 viruses isolated from more than 10,000 poultry market, farm and slaughterhouse samples from across China suggests that the virus would only need small mutations in its protein structure in order to become easily transmissible among humans. The Science paper’s results diverge somewhat from earlier research.

CDC Admits 98 Million Americans Received Polio Vaccine Contaminated With Cancer Virus The CDC has quickly removed a page from their website, which is now cached, ( but now has been removed) admitting that more than 98 million Americans received one or more doses of polio vaccine within an 8-year span when a proportion of the vaccine was contaminated with a cancer causing polyomavirus called SV40. It has been estimated that 10-30 million Americans could have received an SV40 contaminated dose of the vaccine. V40 is an abbreviation for Simian vacuolating virus 40 or Simian virus 40, a polyomavirus that is found in both monkeys and humans. SV40 is believed to suppress the transcriptional properties of the tumor-suppressing genes in humans through the SV40 Large T-antigen and SV40 Small T-antigen. Dr. The matter-of-fact disclosure came during discussions of polio vaccines contaminated with SV40 virus which caused cancer in nearly every species infected by injection. Both the oral, live virus and injectable inactive virus were affected. -SV40 was discovered in 1960. Source: