Cleaning, Disinfection, and Sterilization of medical instruments and supplies in survival situations 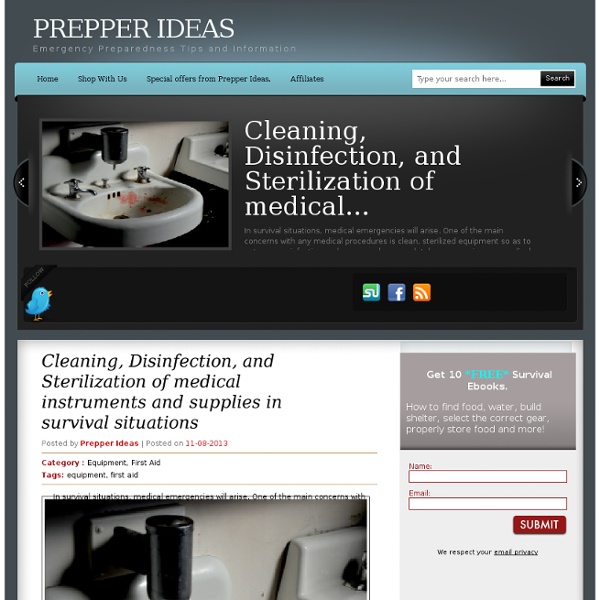 In survival situations, medical emergencies will arise. One of the main concerns with any medical procedures is clean, sterilized equipment so as to not pass on infection and compound or completely compromise any medical procedures that must be done.. Here is a basic primer on disinfection and sterilization in survival situations Q. What is the difference between disinfection and sterilization? A. Sterility is only a temporary state – once sterile packaging is open or the product has been removed from an autoclave colonization begins almost immediately just from exposure to air and bacteria present in the environment. Q. A. Infection rates are no greater if a superficial wound has been irrigated and cleaned with tap water vs. being cleaned and irrigated with sterile saline. Expendable vs. Expendable supplies are used once and discarded. Sterilisation of specific items: Syringes: There are two types of syringes: disposable and reusable. Sharpening permanent needles: Surgical instruments:

How to Build an Outdoor Mud Oven for Use Now and When the SHTF As part of a recent giveaway, one of the questions I asked was “What DIY project would you like to see featured on Backdoor Survival?” There were some amazing responses and over time, I hope to work through the list. Interestingly enough, two readers requested a similar topic and when more than one reader makes a request, I sit up and pay attention. The DIY projects were: 1. How can I build a bread-baking oven with mud and straw? As luck would have it, this is a familiar topic since awhile back, I featured an article on DIY mud ovens. For those of you that are new to the concept, outdoor Mud Ovens are common in third world countries where indoor cooking facilities are nominal and where cooking fuel consists of wood and biomass. here is the full article: How to Build an Outdoor Mud Oven There are some things, though, that cook best in an oven. What is a Mud Oven and How Does it Work? Photo taken at the Mother Earth News Fair The Quest for A Mud Oven The very first firing went as follows.

Pandemic Watch: Another insider announces that a global pandemic is imminent Janet C. Phelan Dr. J. Joseph Kim, founder and director of Inovio Pharmaceuticals, has recently declared that a global pandemic is “inevitable” in the next couple of years. Quoted in an article in US News onDecember 24, Dr. Through his declaration of the imminent nature of a pandemic, Kim adds his name to a growing list of insiders who are stating that we are shortly facing a disease event of a global magnitude. At the very time that our attention is focused on the possibility of losing our rights to defend ourselves via our potential loss of our second amendment rights, the insidious possibility of a global pandemic is lurking....well, right under our pavement. The possibility for utilization of the water system as a delivery system for a pandemic-type agent remains salient. Truthfully, I prefer the word “genocide” to “population reduction.” Dr. Merck has been under scrutiny for a number of years for problems with its products, including drugs such as Temodar, PegIntron, and Intron A.

Manuka Oil Conquers Deadly MRSA Bacteria With life threatening instances of methicillin-resistant Staphylococcus aureus (MRSA) infections on the rise, many are seeking safe and effective alternatives in the realm of natural medicine. Manuka oil is a shining example. Reports of healing attributed to this oil are becoming more commonplace – oftentimes in cases where patients have suffered from MRSA boils, lesions and open wounds that did not respond to antibiotic treatments. Extracted from the leaves and branches of the L. scoparium manuka tree native to New Zealand, this essential oil not only conquers deadly bacterial infections, but also relieves a host of other ailments – from anxiety to eczema. As a potent healer, manuka oil is making its mark as a remedy far more effective than conventional medical care. Dangers of MRSA Traditionally, staph infections have been treated with methicillin, but have since become largely immune to the antibiotic with the emergence of the MRSA strain. Dramatic Recovery Source: wakeup-world.com

United States Accused of Planting Avian Flu in Recent H7N9 Outbreak Janet C. PhelanActivist Post Amidst allegations by a highly placed Colonel in the Chinese army that the U.S. has released a bioweapon in Mainland China, concerns are ramping up that this year's version of the avian flu, H7N9, may turn into a major pandemic. The last few years have seen several false alarms on the pandemic front. H7N9 has already shown itself to have a high mortality rate, higher in fact than the Spanish flu of 1918, which caused 50 million deaths worldwide. According to Keiji Fukuda, WHO's assistant director-general for health, security and the environment, "This is definitely one of the most lethal influenza viruses that we have seen so far." Already, there are questions as to whether H7N9 has mutated and is now transmissible from human to human. In a carefully worded statement, WHO has declared: “So far, there is no evidence of sustained human-to-human transmission.” H7N9 is considered to be resistant to the popular flu countermeasure, Tamiflu.

Herbs For Lungs Top 10 Herbs For The Lungs image to repin / shareHerbs background pic © Africa Studio - Fotolia.com Please share this page: Google + StumbleUpon Reddit Everyone knows the significance of the lungs in their work day in and day out to bring in oxygen and expel carbon dioxide wastes and in effect, promote your overall bodily functioning. Yet, even with an awareness of the lungs' important functions, increasing air pollution levels and poor breathing are causing the lungs not to perform at their peak. [2] Moreover, smoking, vitamin A deficiency, certain over-the-counter cold medications and even traumatic experiences have led to common lung conditions like asthma, emphysema, bronchitis, tuberculosis, pulmonary edema, pneumonia and cancer. However, there are herbs like the below that specifically promote healthier functioning of the lungs. Mullein Licorice Gingko Biloba Echinacea This is an anti-microbial herb known to fight pathogenic microorganism while strengthening the body's immune system.

This Is What Our Grocery Shelves Would Look Like Without Bees Last winter’s so-called Beepocalypse ravaged U.S. bee colonies like nothing that had come before. The country’s beekeepers reported that 31.1% of their colonies perished in the months spanning last fall through early 2013. The number of bee casualties in that period--twice that considered natural--is in keeping with rising honeybee mortality rates of the last six years. Scarier still, scientists aren’t exactly sure as to the cause for the degrading health of bee populations--something that should give you great cause for concern. Well, you don’t have to. In a press release, Whole Foods says the stunt was part of the “Share the Buzz” campaign, a joint project with The Xerces Society that seeks to “raise awareness” about the importance of bees (honeybees in particular) to the health and vibrancy of our food system. Or as Whole Foods puts it: One of every three bites of food comes from plants pollinated by honeybees and other pollinators.

Apple unwraps new tool for medical researchers In a surprise move, Apple has announced a new health app that works with its iPhone and HealthKit — and it’s running on open-source software. “As we worked on HealthKit we came across an even broader impact that iPhone could make and that is on medical research,” Apple CEO Tim Cook said during a live event. “Perhaps the most profound change iPhone will make is on our health.” With the ResearchKit app, Apple intends for the software framework to enable more people to participate in research, and for innovators to build apps on top of Apple’s platform. The company also revealed five apps already available. Jeff Williams, Apple’s senior vice president of operations, introduced ResearchKit as the answer to several problems plaguing the medical research community – namely, small sample sizes, issues with subjective data and the frequency of data collected. The framework will also enable researchers to collect data in near real-time, changing the scale from months to seconds.

800 Scientists Demand Global GMO “Experiment” End Did you hear about the 800 esteemed scientists who came together and demanded the production of genetically modified crops and products be stopped ? Scientists who called on world powers to re-evaluate the future of agriculture and seek sustainability rather than corporate profits ? Don’t be surprised if you haven’t, as the mainstream media won’t touch this one. Eight-hundred scientists did make such a demand. The Institute of Science in Society is a non-profit group of scientists from around the world, dedicated to bringing an end to what they refer to as the “dangerous GMO “experiment. The Open Letter from World Scientists to All Governments calls for “the immediate suspension of all environmental releases of GM crops and products , both commercially and in open field trials, for at least 5 years.” They also want patents on organisms, cell lines, and living things revoked and banned. In the beginning, after its first draft in 1999, the letter had just over 300 signatures. Source: