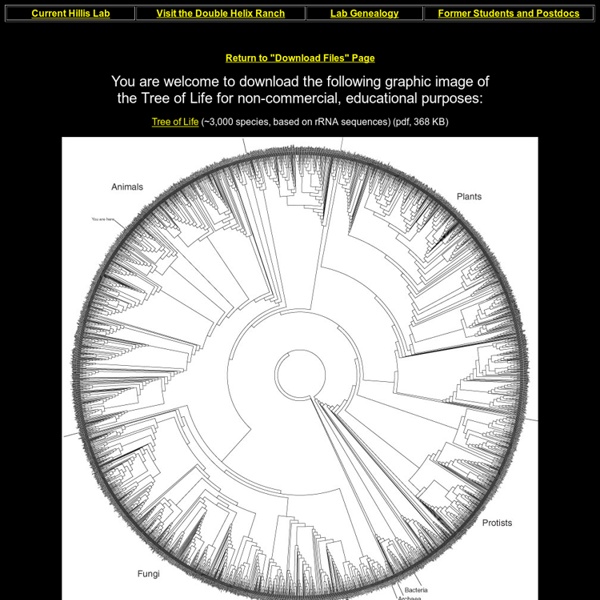 Return to "Download Files" Page You are welcome to download the following graphic image of the Tree of Life for non-commercial, educational purposes: Tree of Life (~3,000 species, based on rRNA sequences) (pdf, 368 KB) (see Science, 2003, 300:1692-1697) This file can be printed as a wall poster. Printing at least 54" wide is recommended. Tree of Life tattoo, courtesy of Clare D'Alberto, who is working on her Ph.D. in biology at the University of Melbourne. The organisms depicted in this tattoo are (starting at 4 o'clock and going around clockwise): (1) a cyanobacterium (Anabaena); (2) a radiolarian (Acantharea); (3) a dinoflagellate (Ceratium); (4) an angiosperm (Spider Orchid); (5) a couple species of fungi (Penicillium and a yeast); (6) a ctenophore (comb jelly); (7) a mollusc (nudibranch); (8) an echinoderm (brittle star); and (9) a vertebrate (Weedy Sea Dragon). Here is another great Tree of Life tattoo! Cover of Molecular Systmatics, 2nd ed

impresora Printouts In A Jiffy, Anywhere It was about time that someone came up with this, I mean we are in the portable era! Stick POP is a portable printer that can handle a small amount of load. How To… Embed This Infographic <a href= ‎"><img src=" title="10 How Tos" alt="How To Infographic" border="0" class="nopin" /></a><br />Source: <a href=' title='Interesting Facts'><a href=' title='Interesting Facts'>Today I Found Out</a></a> 1) How to drastically increase the life of your shaving razor

UCB Parents Jokes &Quotes: Kids talk Science This page is brought to you by UC Berkeley Parents Network Back to the Jokes & Quotes Collection THE FOLLOWING ARE ALL QUOTES FROM 11 YEAR OLDS' SCIENCE EXAMS: * "Water is composed of two gins, Oxygin and Hydrogin. Oxygin is pure gin. Hydrogin is gin and water." * "Artificial insemination is when the farmer does it to the cow instead of the bull." * "When you breathe, you inspire.

LHC Detects Evidence of New Physics After nearly 6 months of smashing particles, the Large Hadron Collider has seen signs of something entirely new. Pairs of charged particles produced when two beams of protons collide seem to be associated with each other even after they fly apart. “It is a small effect, but it is very interesting in itself,” said physicist Guido Tonelli, spokesperson for the LHC’s CMS experiment. Tonelli and colleagues announced the results in a seminar at CERN September 21 and in a paper submitted to the Journal of High Energy Physics. The LHC finally got up and running in March after more than a year of false starts. FUTURO We are living in an extremely exciting time in terms of science and technology. Things that have always been considered science fiction are becoming normal day-to-day components of our lives. And while we have been seeing invention after breakthrough over and over in the last couple of decades, this next ten years is going to blow everything else out of the water. The awesome thing about all these scientific discoveries it that they create technology that allows us to make more breakthroughs even faster.

Barcode Yourself by Scott Blake Barcode Yourself is a complete, interactive experience in the series of barcode art, created using the personalized data of participants. Enter an individual's gender, weight, height, age and location, and the barcode is formed using real-world data. The individualized barcode can then be printed, mapped, scanned, even depicted on a t-shirt or coffee mug. StumbleUpon The FBI’s Reading Room contains many files of public interest and historical value. In compliance with the National Archives and Records Administration (NARA) requirements, some of these records are no longer in the physical possession of the FBI, eliminating the FBI’s capability to re-review and/or re-process this material. Please note, that the information found in these files may no longer reflect the current beliefs, positions, opinions, or policies currently held by the FBI. The image quality contained within this site is subject to the condition of the original documents and original scanning efforts.

Why are past, present, and future our only options? But things get awkward if you have a friend. (Use your imagination if necessary.) Low blow, Dr. Inside A Cloud Computing Data Center « Data Center Knowledge The interior of a 40-foot container inside the new Microsoft Chicago data center, packed with servers on either side of a center aisle (click to see a larger version of this image). Most cloud computing data centers aren’t open for tours. Not to worry. 11 cheap gifts guaranteed to impress science geeks Science comes up with a lot of awesome stuff, and you don't need a Ph.D, a secret lab, or government funding to get your hands on some of the coolest discoveries. We've got a list of 11 mostly affordable gifts that are guaranteed to blow your mind, whether or not you're a science geek. Click on any image to see it enlarged.

This tree is from an analysis of small subunit rRNA sequences sampled from about 3,000 species from throughout the Tree of Life. The species were chosen based on their availability, but we attempted to include most of the major groups, sampled very roughly in proportion to the number of known species in each group (although many groups remain over- or under-represented). by hellequin Aug 16