The 13 Most Important Numbers in the Universe - James D. Stein's Cosmic Numbers 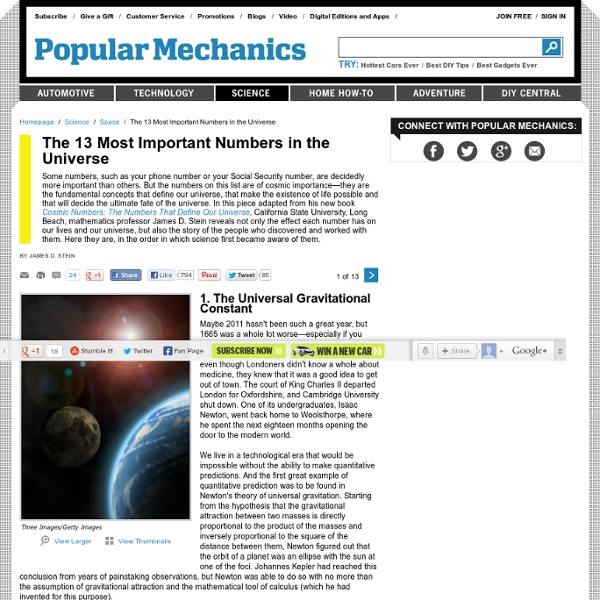 In the 17th century, scientists understood three phases of matter—solids, liquids and gases (the discovery of plasma, the fourth phase of matter, lay centuries in the future). Back then, solids and liquids were much harder to work with than gases because changes in solids and liquids were difficult to measure with the equipment of the time. So many experimentalists played around with gases to try to deduce fundamental physical laws. Robert Boyle was perhaps the first great experimentalist, and was responsible for what we now consider to be the essence of experimentation: vary one or more parameter, and see how other parameters change in response. It may seem obvious in retrospect, but hindsight, as the physicist Leo Szilard once remarked, is notably more accurate than foresight.

Scientists Find a Population of Butterflies That Appears to Be Splitting Into Two Species Nov. 5, 2009 AUSTIN, Texas — Breaking up may actually not be hard to do, say scientists who've found a population of tropical butterflies that may be on its way to a split into two distinct species. Polymorphic mimicry in Heliconius cydno alithea in western Ecuador, where the white form (middle left) mimics the white species Heliconius sapho (top left) and the yellow form (middle right) mimics the yellow species Heliconius eleuchia (bottom right). Image: Marcus Kronforst and Krushnamegh Kunte The cause of this particular break-up? A shift in wing color and mate preference.

What Is the Speed of Sound? Image: Red Bull Stratos This seems to be the most common discussion regarding the recent Red Bull Stratos Jump. Unless you have been living under a rock lately, you have probably seen the awesome jump from 128,000 feet. Here is a great summary video to get you pumped up. The official fastest free fall speed was reported as 373 m/s. AH HA! The Ruins of Detroit – - PlogPlog Photo Blog Posted Feb 07, 2011 Share This Gallery inShare850 Up and down Detroit’s streets, buildings stand abandoned and in ruin. French photographers Yves Marchand and Romain Meffre set out to document the decline of an American city.

The 6 Most Mind-Blowing Things Ever Discovered in Space #3. A Cold Star Here's the very first lesson you learned about the cosmos: The sun is hot. Even before you knew what the sun was, or what a star was made of, you knew that. The Story of Mathematics - Sumerian/Babylonian Mathematics Sumer (a region of Mesopotamia, modern-day Iraq) was the birthplace of writing, the wheel, agriculture, the arch, the plow, irrigation and many other innovations, and is often referred to as the Cradle of Civilization. The Sumerians developed the earliest known writing system - a pictographic writing system known as cuneiform script, using wedge-shaped characters inscribed on baked clay tablets - and this has meant that we actually have more knowledge of ancient Sumerian and Babylonian mathematics than of early Egyptian mathematics. Indeed, we even have what appear to school exercises in arithmetic and geometric problems. As in Egypt, Sumerian mathematics initially developed largely as a response to bureaucratic needs when their civilization settled and developed agriculture (possibly as early as the 6th millennium BCE) for the measurement of plots of land, the taxation of individuals, etc. in the Babylonian system represented 3,600 plus 60 plus 1, or 3,661.

Physics Flash Animations We have been increasingly using Flash animations for illustrating Physics content. This page provides access to those animations which may be of general interest. The animations will appear in a separate window. The animations are sorted by category, and the file size of each animation is included in the listing. Cosmic smashup predicted, but Earth will survive WASHINGTON (AP) — Don't worry about when the world as we know it might end. NASA has calculated that our entire Milky Way galaxy will crash into a neighboring galaxy with a direct head-on hit — in 4 billion years. Astronomers in a NASA news conference Thursday said that years of observations from the Hubble Space Telescope provide grisly details of a long-anticipated galactic smashup.