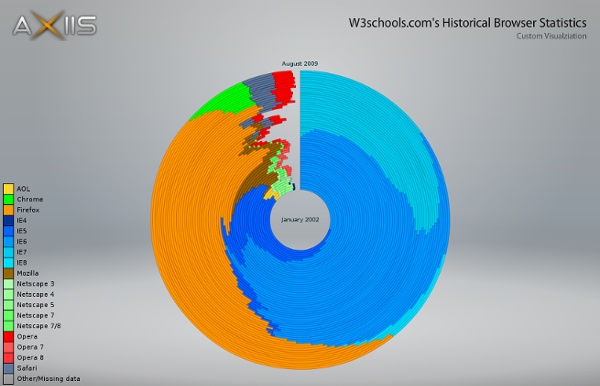 Download Graphic Images from the Hillis/Bull Lab Return to "Download Files" Page You are welcome to download the following graphic image of the Tree of Life for non-commercial, educational purposes: Tree of Life (~3,000 species, based on rRNA sequences) (pdf, 368 KB) (see Science, 2003, 300:1692-1697) This file can be printed as a wall poster. Everything Ages Fast (Facebook, Youtube, Twitter, and Skype) These posters are part of an ad campaign entitled “Everything Ages Fast,” designed by Moma Propaganda and created for client Maximidia Seminars Link via Laughing Squid

Taxing the Rich - John Stossel Progressives want to raise taxes on individuals who make more than $200,000 a year because they say it's wrong for the rich to be "given" more money. Sunday's New York Times carries a cartoon showing Uncle Sam handing money to a fat cat. They just don't get it. As I've said before, a tax cut is not a handout.

Absinthe FAQ This FAQ file was prepared by Matthew Baggott (bagg@ellis.uchicago.edu) for distribution on the newsgroup alt.drugs. It may be freely reprinted and distributed as long as it is properly credited. If you're reprinting the file in a zine (e- or otherwise), I'd like to hear about it. Screensaver - visualizing the global blogosphere Twingly Screensaver Beta Twingly screensaver is visualizing the global blog activity in real time. Forget RSS readers where you see only what you're interested in. With Twingly screensaver you get a 24/7 stream of all (viewer discretion advised) blog activity, straight to your screen.

The 6 Most Gigantic Everything in the History of War In the words of Mahatma Gandhi, "War makes people act like dicks." We don't want to glorify war or otherwise portray it as something other than terrible. Yet, war makes people think big, and sometimes you have to sit back and be amazed by what humans can accomplish when they really, really want to kill each other. The Big Gun: The Schwerer Gustav The Gustav is the biggest gun ever fired in combat, period.

How to build a tin can waveguide antenna Assemble the probe and mount in can Now you'll need that bit of wire. You'll need a soldering iron or a friend with one as well. Cut the wire so that when it is stuck in the connector as shown, the total length of both the brass tube and wire sticking out past the connector is 1.21". Web Trend Map 4 by Oliver Reichenstein The has been featured all across the web from TechCrunch to BoingBoing, and Gawker. Now the latest version of our popular Web Trend Map is up for grabs.—The Web Trend Map plots the Internet’s leading names and domains onto the Tokyo Metro map. Domains and personalities are carefully selected through dialogue with map enthusiasts, and every domain is evaluated based on traffic, revenue, and character.

Greek Gods Family Tree / Genealogy Doing homework? Your teacher has already seen this. See Theoi; it has properly-sourced information. Known errors: Generally inconsistent sourcing. This chart was made in 2004, and Wikipedia was treated as a primary source.