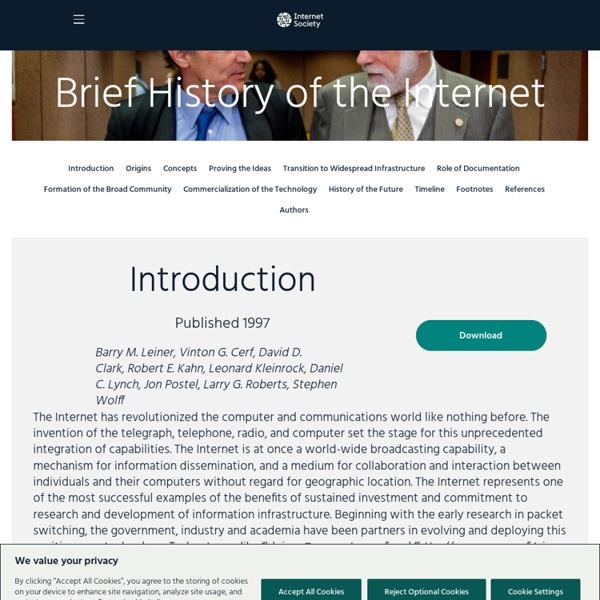 Barry M. Leiner, Vinton G. Cerf, David D. Clark, Robert E. Kahn, Leonard Kleinrock, Daniel C. Lynch, Jon Postel, Larry G. Introduction The Internet has revolutionized the computer and communications world like nothing before. This is intended to be a brief, necessarily cursory and incomplete history. In this paper,3 several of us involved in the development and evolution of the Internet share our views of its origins and history. The Internet today is a widespread information infrastructure, the initial prototype of what is often called the National (or Global or Galactic) Information Infrastructure. Origins of the Internet The first recorded description of the social interactions that could be enabled through networking was a series of memos written by J.C.R. Leonard Kleinrock at MIT published the first paper on packet switching theory in July 1961 and the first book on the subject in 1964. The Initial Internetting Concepts The original ARPANET grew into the Internet. Proving the Ideas

Packet switching Packet switching is a digital networking communications method that groups all transmitted data – regardless of content, type, or structure – into suitably sized blocks, called packets. Overview[edit] An animation demonstrating data packet switching across a network (Click on the image to load the animation) subculture Hippie, also spelled hippy, Hog Farm© Lisa Law/The Image Worksmember, during the 1960s and 1970s, of a countercultural movement that rejected the mores of mainstream American life. The movement originated on college campuses in the United States, although it spread to other countries, including Canada and Britain. Vint Cerf: We Knew What We Were Unleashing on the World Vint Cerf invented the protocol that rules them all: TCP/IP. Most people have never heard of it. But it describes the fundamental architecture of the internet, and it made possible Wi-Fi, Ethernet, LANs, the World Wide Web, e-mail, FTP, 3G/4G — as well as all of the inventions built upon those inventions.

GetGlue: Check-in to tv, movies and music Social Network for Entertainment Discover what to watch, share what you're watching with friends and fans, and get updates from your favorite shows. Personal Computing Timeline The computer was born not for entertainment or email but out of a need to solve a serious number-crunching crisis. By 1880, the U.S. population had grown so large that it took more than seven years to tabulate the U.S. Census results. The government sought a faster way to get the job done, giving rise to punch-card based computers that took up entire rooms. Today, we carry more computing power on our smartphones than was available in these early models.

The world's 50 most powerful blogs The following apology was published in the Observer's For the record column, Sunday March 16 2008 The article below said 'Psychodwarf' was Beppe Grillo's nickname for 'Mario Mastella, leader of the Popular-UDEUR centre-right party', but it's actually his nickname for Silvio Berlusconi. Mastella's first name is Clemente and Popular-UDEUR was part of Romano Prodi's centre-left coalition. Five things you don’t need in your next smartphone Gadget bloggers tend to share a few key traits, and one of those is an inability to resist high-end hardware. Super-fast processors, hi-res screens and next generation features get our blood rising. But we sometimes get blinded by our desire for specs, and all too often we ignore the high price that these features come with. Let's take a step back and examine the need, or lack thereof, for some of the capabilities of the latest round of smartphones. In the last few months I've reviewed a lot of smartphones, at all different price points.

F&*#ing Internet, how does it work? For the next 60 years or so—basically, until everyone roughly my age has died off—former Alaskan senator Ted Stevens will be widely remembered (and mocked) for once describing the Internet as "a series of tubes". But here's the thing. It's easy to make fun of Ted Stevens.