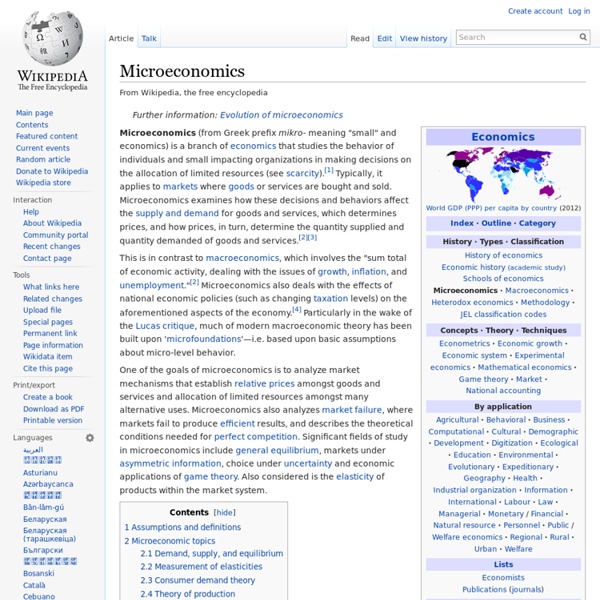 This is in contrast to macroeconomics, which involves the "sum total of economic activity, dealing with the issues of growth, inflation, and unemployment."[2] Microeconomics also deals with the effects of national economic policies (such as changing taxation levels) on the aforementioned aspects of the economy.[4] Particularly in the wake of the Lucas critique, much of modern macroeconomic theory has been built upon 'microfoundations'—i.e. based upon basic assumptions about micro-level behavior. Assumptions and definitions[edit] Microeconomic theory progresses by defining a competitive budget set which is a subset of the consumption set. The utility maximization problem is the heart of consumer theory. The utility maximization problem is a simple constrained optimization problem in which an individual seeks to maximize utility subject to a budget constraint. The theory of supply and demand usually assumes that markets are perfectly competitive. Microeconomic topics[edit] Monopoly[edit] Related:  Economics

Economic equilibrium In economics, economic equilibrium is a state where economic forces such as supply and demand are balanced and in the absence of external influences the (equilibrium) values of economic variables will not change. For example, in the standard text-book model of perfect competition, equilibrium occurs at the point at which quantity demanded and quantity supplied are equal.[1] Market equilibrium in this case refers to a condition where a market price is established through competition such that the amount of goods or services sought by buyers is equal to the amount of goods or services produced by sellers. This price is often called the competitive price or market clearing price and will tend not to change unless demand or supply changes and the quantity is called "competitive quantity" or market clearing quantity. Properties of equilibrium[edit] Three basic properties of equilibrium in general have been proposed by Huw Dixon.[2] These are: Example: The competitive equilibrium. See also[edit]

Economics For a topical guide to this subject, see Outline of economics. Economics is the social science that studies the behavior of individuals, households, and organizations (called economic actors, players, or agents), when they manage or use scarce resources, which have alternative uses, to achieve desired ends. Agents are assumed to act rationally, have multiple desirable ends in sight, limited resources to obtain these ends, a set of stable preferences, a definite overall guiding objective, and the capability of making a choice. The traditional concern of economics is to gain an understanding of the processes that govern the production, distribution and consumption of goods and services in an exchange economy.[3] An agent may have purposes or ends, such as reducing or protecting individuals from crime, on which he or she wants to spend resources. Definitions There are a variety of modern definitions of economics. J. Economics is a study of man in the ordinary business of life. Microeconomics

Thermoeconomics Thermoeconomics, also referred to as biophysical economics, is a school of heterodox economics that applies the laws of thermodynamics to economic theory.[1] The term "thermoeconomics" was coined in 1962 by American engineer Myron Tribus,[2][3][4] Thermoeconomics can be thought of as the statistical physics of economic value.[5] Basis[edit] Thermoeconomics is based on the proposition that the role of energy in biological evolution should be defined and understood through the second law of thermodynamics but in terms of such economic criteria as productivity, efficiency, and especially the costs and benefits (or profitability) of the various mechanisms for capturing and utilizing available energy to build biomass and do work.[6][7] Thermodynamics[edit] Thermoeconomists maintain that human economic systems can be modeled as thermodynamic systems. Economic systems[edit] See also[edit] References[edit] ^ Jump up to: a b Sieniutycz, Stanislaw; Salamon, Peter (1990). Further reading[edit]

Gift economy A gift economy, gift culture or gift exchange is a mode of exchange where valuables are not sold, but rather given without an explicit agreement for immediate or future rewards.[1] In contrast to a barter economy or a market economy, social norms and custom govern gift exchange, rather than an explicit exchange of goods or services for money or some other commodity.[2] According to anthropologists Maurice Bloch and Jonathan Parry, it is the unsettled relationship between market and non-market exchange that attracts the most attention. Gift economies are said, by some,[7] to build communities, and that the market serves as an acid on those relationships.[8] Principles of gift exchange[edit] Property and alienability[edit] Gift-giving is a form of transfer of property rights over particular objects. Gift vs prestation[edit] A Kula bracelet from the Trobriand Islands. Inalienable possessions[edit] Reciprocity and the "spirit of the gift"[edit] Charity, debt, and the 'poison of the gift'[edit]

Macroeconomics Circulation in macroeconomics. Macroeconomics (from the Greek prefix makro- meaning "large" and economics) is a branch of economics dealing with the performance, structure, behavior, and decision-making of an economy as a whole, rather than individual markets. This includes national, regional, and global economies.[1][2] With microeconomics, macroeconomics is one of the two most general fields in economics. While macroeconomics is a broad field of study, there are two areas of research that are emblematic of the discipline: the attempt to understand the causes and consequences of short-run fluctuations in national income (the business cycle), and the attempt to understand the determinants of long-run economic growth (increases in national income). Basic macroeconomic concepts[edit] Output and income[edit] Unemployment[edit] Main article: Unemployment A chart using US data showing the relationship between economic growth and unemployment expressed by Okun's law. Inflation and deflation[edit]

Economic history Development as a separate field[edit] Treating economic history as a discrete academic discipline has been a contentious issue for many years. Academics at the London School of Economics and the University of Cambridge had numerous disputes over the separation of economics and economic history in the interwar era. In the initial period of the subject's development, the LSE position of separating economic history from economics won out. In the US, economic history has for a long time been regarded as a form of applied economics. In recent decades economic historians, following Douglass North, have tended to move away from narrowly quantitative studies toward institutional, social, and cultural history affecting the evolution of economies.[2][a 1] However, this trend has been criticized, most forcefully by Francesco Boldizzoni, as a form of economic imperialism "extending the neoclassical explanatory model to the realm of social relations History of socialism[edit] See also[edit] Notes[edit]

World economy The world economy, or global economy, generally refers to the economy, which is based on economies of all of the world's countries' national economies. Also global economy can be seen as the economy of global society and national economies – as economies of local societies, making the global one. It can be evaluated in various kind of ways. It is inseparable from the geography and ecology of Earth, and is therefore something of a misnomer, since, while definitions and representations of the "world economy" vary widely, they must at a minimum exclude any consideration of resources or value based outside of the Earth. It is common to limit questions of the world economy exclusively to human economic activity, and the world economy is typically judged in monetary terms, even in cases in which there is no efficient market to help valuate certain goods or services, or in cases in which a lack of independent research or government cooperation makes establishing figures difficult.

Economic system Among existing economic systems, distinctive methods of analysis have developed, such as socialist economics and Islamic economic jurisprudence. Today the dominant form of economic organization at the global level is based on market-oriented mixed economies.[1] Economic systems is the category in the Journal of Economic Literature classification codes that includes the study of such systems. One field that cuts across them is comparative economic systems. Subcategories of different systems there include: planning, coordination, and reformproductive enterprises; factor and product markets; prices; populationpublic economics; financial economicsnational income, product, and expenditure; money; inflationinternational trade, finance, investment, and aidconsumer economics; welfare and povertyperformance and prospectsnatural resources; energy; environment; regional studiespolitical economy; legal institutions; property rights.[2] Components[edit] Types[edit] Capitalism[edit] Mixed economy[edit]

Business ethics Business ethics (also corporate ethics) is a form of applied ethics or professional ethics that examines ethical principles and moral or ethical problems that arise in a business environment. It applies to all aspects of business conduct and is relevant to the conduct of individuals and entire organizations.[1] History[edit] Business ethical norms reflect the norms of each historical period. The term 'business ethics' came into common use in the United States in the early 1970s. Firms started highlighting their ethical stature in the late 1980s and early 1990s, possibly trying to distance themselves from the business scandals of the day, such as the savings and loan crisis. Overview[edit] Business ethics reflects the philosophy of business, one of whose aims is to determine the fundamental purposes of a company. Ethical issues include the rights and duties between a company and its employees, suppliers, customers and neighbors, its fiduciary responsibility to its shareholders.

Informal sector The informal sector or informal economy is that part of an economy that is not taxed, monitored by any form of government or included in any gross national product (GNP), unlike the formal economy.[1] Other terms used to refer to the informal sector can include the black market, the shadow economy, the underground economy, the agora, and System D. Associated idioms include "under the table", "off the books" and "working for cash". Definition[edit] The original use of the term ‘informal sector’ is attributed to the economic development model put forward by W. The term is also useful in describing and accounting for forms of shelter or living arrangements that are similarly unlawful, unregulated, or not afforded protection of the state. Informality, both in housing and livelihood generation has often been seen as a social ill, and described either in terms of what participant’s lack, or wish to avoid. History[edit] Statistics[edit] Estimated size of countries' informal economy[edit]

Consumer spending Macroeconomic factors affecting spending[edit] Taxes[edit] Taxes are a tool in the adjustment of the economy. Tax policies designed by governments affect consumer groups, net consumer spending and consumer confidence. Underlying tax manipulation as a stimulant or suppression of consumer spending is an equation for GDP. Consumer sentiment[edit] Consumer sentiments are the attitudes of households and other entities toward the economy and the health of the fiscal markets, and they are a strong constituent of consumer spending. Government economic stimulus[edit] In times of economic trouble or uncertainty, the government often tries to rectify the issue by distributing economic stimuli, often in the form of rebates or checks. Oil[edit] Oil is an extremely valuable and vital resource to economies and societies everywhere. Luxury consumer spending in the United States[edit] Luxury goods[edit] Debt[edit] Consumerism[edit] Data[edit] United States[edit] See also[edit] References[edit]