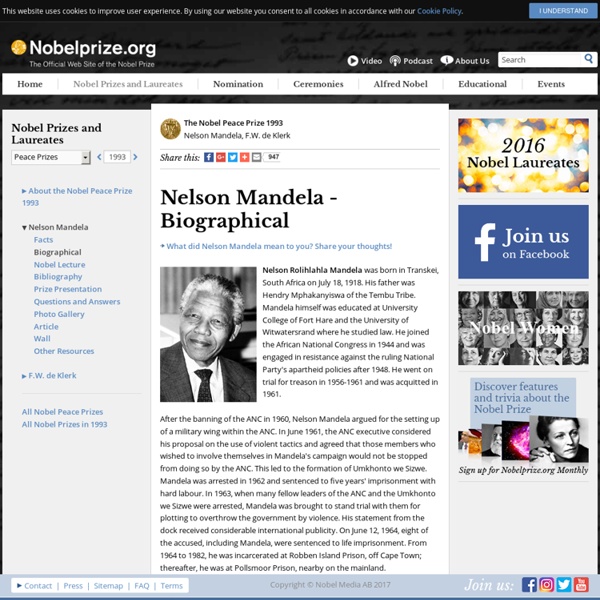 What did Nelson Mandela mean to you? Share your thoughts! Nelson Rolihlahla Mandela was born in Transkei, South Africa on July 18, 1918. His father was Hendry Mphakanyiswa of the Tembu Tribe. After the banning of the ANC in 1960, Nelson Mandela argued for the setting up of a military wing within the ANC. During his years in prison, Nelson Mandela's reputation grew steadily. Nelson Mandela was released on February 11, 1990. From Les Prix Nobel. This autobiography/biography was written at the time of the award and later published in the book series Les Prix Nobel/ Nobel Lectures/The Nobel Prizes. Watch a video clip of Nelson Mandela and Frederik Willem de Klerk receiving their Nobel Peace Prize medals and diplomas during the Nobel Peace Prize Award Ceremony at the Oslo City Hall in Norway, 10 December 1993. Watch the Documentary Norwegian 1 min. In order to see the video you need Adobe Flash PlayerCopyright © Norsk Rikskringkasting AS 2012 Nelson Mandela died on 5 December 2013.

Nelson Mandela - Biography The life and times of Mandela Nelson Rolihlahla Mandela became known and respected all over the world as a symbol of the struggle against apartheid and all forms of racism; the icon and the hero of African liberation. Mandela or Madiba, as he was affectionately known, has been called a freedom fighter, a great man, South Africa's Favourite Son, a global icon and a living legend, among countless other names. He has been an activist, a political prisoner, South Africa's first democratically elected president, an international peacemaker and statesman, and a Nobel Peace Prize winner. As a husband and a father, Mandela sacrificed the joys of family life and of seeing his children grow up. Most ordinary South Africans knew little about Mandela during his prison years, as the apartheid government suppressed information, and what was released was biased. But prison bars could not prevent him from continuing to inspire his people to struggle and sacrifice for their liberation. The early years

Biography – Nelson Mandela Foundation Rolihlahla Mandela was born into the Madiba clan in the village of Mvezo, in the Eastern Cape, on 18 July 1918. His mother was Nonqaphi Nosekeni and his father was Nkosi Mphakanyiswa Gadla Mandela, principal counsellor to the Acting King of the Thembu people, Jongintaba Dalindyebo. In 1930, when he was 12 years old, his father died and the young Rolihlahla became a ward of Jongintaba at the Great Place in Mqhekezweni1. Hearing the elders’ stories of his ancestors’ valour during the wars of resistance, he dreamed also of making his own contribution to the freedom struggle of his people. He attended primary school in Qunu where his teacher, Miss Mdingane, gave him the name Nelson, in accordance with the custom of giving all schoolchildren “Christian” names. He completed his Junior Certificate at Clarkebury Boarding Institute and went on to Healdtown, a Wesleyan secondary school of some repute, where he matriculated. Entering politics At the end of 1952 he was banned for the first time. 1.