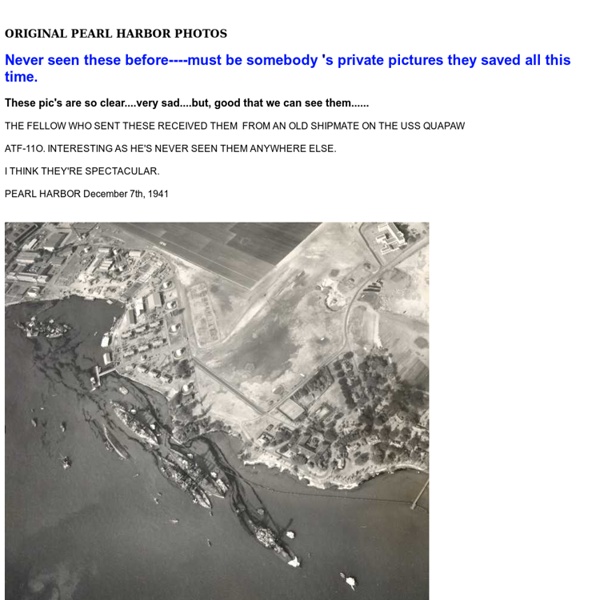 ORIGINAL PEARL HARBOR PHOTOS Never seen these before----must be somebody 's private pictures they saved all this time. These pic's are so clear....very sad....but, good that we can see them...... THE FELLOW WHO SENT THESE RECEIVED THEM FROM AN OLD SHIPMATE ON THE USS QUAPAW PEARL HARBOR December 7th, 1941 Pearl Harbor On Sunday, December 7th, 1941 the Japanese launched a Surprise attack against the U.S. Hawaii . Admiral Nagumo, hoped to catch the entire fleet in port. Would have it, the Aircraft Carriers and one of the Battleships Were not in port. Island , where it had just delivered some aircraft. Lexingtonwas ferrying aircraft to Midway, and the USS Saratoga and USS Colorado were undergoing repairs in the United States). In spite of the latest intelligence reports about the missing Aircraft carriers (his most important targets), Admiral Nagumo Decided to continue the attack with his force of six carriers and 423 aircraft. The first wave of a two-wave attack. Kaneohe and Ewa.

Pearl Harbor Facts Finding out the basics facts about Pearl Harbor can often be troublesome. Hopefully you will find what you are looking for here for this collection of Pearl Harbor facts should prove both informational and interesting. General Pearl Harbor Facts The attack on Pearl Harbor occurred on December 7, 1941. The Japanese attacked the United States without warning. Harry Truman and the Atomic Bomb - Ralph Raico The most spectacular episode of Harry Truman's presidency will never be forgotten but will be forever linked to his name: the atomic bombings of Hiroshima on August 6, 1945, and of Nagasaki three days later. Probably around two hundred thousand persons were killed in the attacks and through radiation poisoning; the vast majority were civilians, including several thousand Korean workers. Twelve US Navy fliers incarcerated in a Hiroshima jail were also among the dead.[1]

World War II: Pearl Harbor - Alan Taylor - In Focus On December 7, 1941, the Imperial Japanese Navy launched a surprise attack on the United States, bombing warships and military targets in Pearl Harbor, Hawaii. More than 350 Japanese aircraft attacked the naval base in two waves, strafing targets, dropping armor-piercing bombs, and launching torpedoes toward U.S. battleships and cruisers. The U.S. forces were unprepared, waking to the sounds of explosions and scrambling to defend themselves. The entire preemptive attack lasted only 90 minutes, and in that time, the Japanese sunk four battleships and two destroyers, pummeled 188 aircraft, and damaged even more buildings, ships and airplanes. (Two of the battleships were later raised and returned to service.)

Stories - The Date of Infamy - World War II Valor in the Pacific National Monument The Japanese attack fleet of 33 warships and auxiliary craft, including six aircraft carriers, sailed from northern Japan for the Hawaiian Islands. The attack on Pearl Harbor was the culmination of a decade of deteriorating relations between Japan and the United States over the status of China and the security of Southeast Asia. The breakdown began in 1931 when Japanese army extremists, in defiance of government policy, invaded and overran the northern-most Chinese province of Manchuria. Japan ignored American protests, and launched a full-scale attack on the rest of China in the summer of 1937. Although alarmed by this action, neither the United States, nor any other nation with interests in the Far East, was willing to use military force to halt Japanese expansion.

Hiroshima Atomic Bombing Remembered with Google Earth During the final days of World War II, the United States dropped devastating atomic bombs on Hiroshima and Nagasaki. More than 65 years later, Hidenori Watanave, an associate professor of Tokyo Metropolitan University, has created a digital archive to preserve the memory of the Hiroshima bombing. A complement to the Nagasaki archive launched in 2010, the Hiroshima Archive layers historical resources into Google Earth, giving users the chance to explore a panoramic view of Hiroshima, survivor accounts, aerial photos, 3D topographical data, and building models. The documents are all written in Japanese, which creates something of a language barrier for many readers. But a tour through the archive will tell you something important — something important about the Hiroshima bombing and how we’re memorializing the past in our new digital age. Related Content:

It shows what happened in WWII and how we were affected by it! :) by lilylime Dec 9