Why you should learn to lucid dream 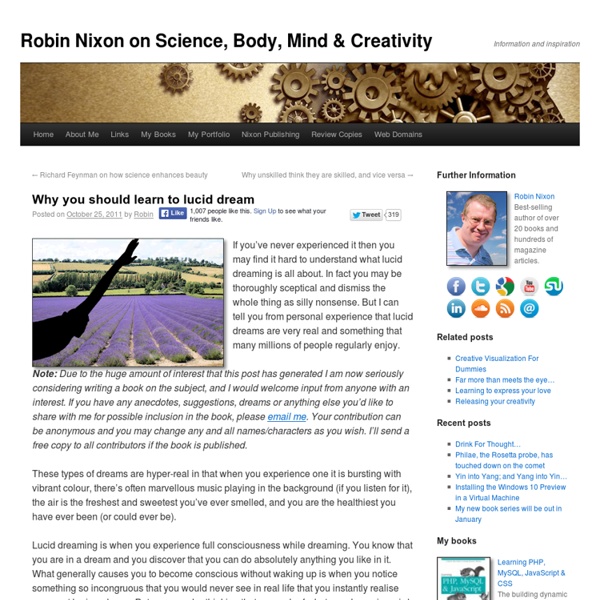 If you’ve never experienced it then you may find it hard to understand what lucid dreaming is all about. In fact you may be thoroughly sceptical and dismiss the whole thing as silly nonsense. But I can tell you from personal experience that lucid dreams are very real and something that many millions of people regularly enjoy. Note: Due to the huge amount of interest that this post has generated I am now seriously considering writing a book on the subject, and I would welcome input from anyone with an interest. If you have any anecdotes, suggestions, dreams or anything else you’d like to share with me for possible inclusion in the book, please email me. Your contribution can be anonymous and you may change any and all names/characters as you wish. Lucid dreaming is when you experience full consciousness while dreaming. You may also have another question on your mind, along the lines of “What’s the big deal with being conscious while dreaming, anyway?” Experiencing a lucid dream

The Not-So-Rich-Any-More List Even before the financial crisis, the Occupy movement and the new era of austerity, the Sunday Times Rich List was an odd kind of fixture in the media landscape. The annual roll call of the wealthiest 1,000 individuals or families in the UK has always triggered the full range of our ambivalent responses to people with staggering amounts of money: envy, admiration, disdain, awe, and that special flavour of inverse snobbery that stems from being convinced that you've spent your life more meaningfully than the head of the Tetra Pak food-packaging empire, whatever the impact on your bank balance. Now, though, for reasons we all understand, attitudes towards the super-rich are changing: disdain is hardening into anger; ambivalence has been replaced with hostility. Despite a still-weak economy, the collective wealth of the 2011 Rich List increased by £60.2bn on the previous year, and in the 2012 list, which is published tomorrow, that divergence looks set to get larger. Sean Quinn Simon Halabi

102 Resources for Fiction Writing « Here to Create UPDATE 1/10: Dead links removed, new links added, as well as Revision and Tools and Software sections. Are you still stuck for ideas for National Novel Writing Month? Or are you working on a novel at a more leisurely pace? Dwight Schrute Knows Best Oh Dwight, you are the best thing to happen to the US version of The Office. The wry second-in-command at the Scranton office of Dunder Mifflin is famous for his obscure knowledge and comically literal interpretation of… well… everything. And so the Dwight Schrute Knows Best meme or simply, the Dwight Schrute meme was born: Enjoy the Dwight Schrute meme? 10 Instant Emotional Fitness Tools By When things get out of control and you momentarily lose your emotional balance, there are any number of little things you can do to regain it. Here are ten tools to help get you started.

Guest Essay: You Are A Scientist “In science, even when you’re convinced that you know the right answer, you keep testing your understanding in new ways. You keep looking for phenomena that might do something different than what your best ideas and theories predict. As long as there’s a Universe out there to investigate, science doesn’t end.” -Ethan Siegel We’ve talked many times here about how the term theory gets abused by non-scientists, what scientific theories do and do not do, and of course, just yesterday, how important science and scientists actually are for progress in our quest to understand the Universe.

Tetrapharmakos The Tetrapharmakos (τετραφάρμακος) "four-part remedy" is a summary of the first four of the Κύριαι Δόξαι (Kuriai Doxai, the forty Epicurean Principal Doctrines given by Diogenes Laërtius in his Life of Epicurus) in Epicureanism, a recipe for leading the happiest possible life. They are recommendations to avoid anxiety or existential dread.[1] The four-part cure[edit] As expressed by Philodemos, and preserved in a Herculaneum Papyrus (1005, 4.9–14), the tetrapharmakos reads:[4] Why Self-Compassion Trumps Self-Esteem In this incredibly competitive society of ours, how many of us truly feel good about ourselves? I remember once, as a freshman in college, after spending hours getting ready for a big party, I complained to my boyfriend that my hair, makeup, and outfit were woefully inadequate. He tried to reassure me by saying, “Don’t worry, you look fine.” Juan Estey

Top 10 Websites To Watch Movies Online For Free Without Downloading It is easy to watch FREE movies online from China here, since there are many video websites for you to do that, but outside China, there may be not many video websites to watch movies online for free, because of the Copyright thing. However, God likes free. There are always some great people who do the great things and let us watch full movies online for free. Below 10 websites will let you watch the full online movies (even the latest ones) for free. You don’t have to download anything, neither to register anything. The 48 Laws of Power Background[edit] Greene initially formulated some of the ideas in The 48 Laws of Power while working as a writer in Hollywood and concluding that today's power elite shared similar traits with powerful figures throughout history.[5] In 1995, Greene worked as a writer at Fabrica, an art and media school, and met a book packager named Joost Elffers.[4][8] Greene pitched a book about power to Elffers and six months later, Elffers requested that Greene write a treatment.[4] Although Greene was unhappy in his current job, he was comfortable and saw the time needed to write a proper book proposal as too risky.[10] However, at the time Greene was rereading his favorite biography about Julius Caesar and took inspiration from Caesar's decision to cross the Rubicon River and fight Pompey, thus inciting the Great Roman Civil War.[10] Greene would follow Caesar's example and write the treatment, which later became The 48 Laws of Power.[10] He would note this as the turning point of his life.[10]

The Five Heresies (Part 1) [disinfo ed.'s note: the following is an excerpt from the forthcoming book The God Problem: How A Godless Cosmos Creates by Howard Bloom ("I have met God and he lives in Brooklyn" – Richard Metzger), courtesy of the author and Prometheus Books.] Before we probe for clues to the God Problem, we need to equip ourselves with five tools—the five heresies. Remember the second rule of science: look at things right under your nose as if you’ve never seen them before, then proceed from there. Question your assumptions. To question your assumptions, you have to find them.

10 of the Biggest Lies in History" According to myth, a young George Washington confessed to cutting down a cherry tree by proclaiming, "I cannot tell a lie." The story is testament to how much respect Americans have for their cherished first president and honesty in general. Unfortunately, in the annals of history it seems there are 10 dishonest scoundrels for every honorable hero like Washington. Supposedly, the truth can set you free. 10 Great Moleskine Hacks In honor of Lifehack’s partnership with Moleskine, I’ve decided to post all Moleskine-related posts this week. Today, I’ll describe 10 cool ways to get a little more out of your Moleskine. While most of these hacks are aimed at the pocket-sized, hardbound Moleskine (what I think of as the “traditional” Moleskine), they can easily be adapted to the medium and large-sized notebooks as well. So, without any further ado, here they are: 10 great Moleskine hacks! 1. Divide sections with tabs.