MindSet: A Book written by Carol Dweck. Teaching a growth mindset creates motivation and productivity in the worlds of business, education, and sports. Can Perseverance Be Taught? Can perseverance be taught? 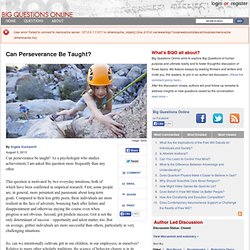 As a psychologist who studies achievement, I am asked this question more frequently than any other. This question is motivated by two everyday intuitions, both of which have been confirmed in empirical research: First, some people are, in general, more persistent and passionate about long-term goals. Compared to their less gritty peers, these individuals are more resilient in the face of adversity, bouncing back after failure and disappointment and otherwise staying the course even when progress is not obvious. Second, grit predicts success. Grit is not the only determinant of success – opportunity and talent matter, too.

So, can we intentionally cultivate grit in our children, in our employees, in ourselves? As a starting point, we should acknowledge the empirical fact that perseverance, like extraversion, intelligence, and every other trait psychologists measure and study, is a function of both genes (nature) and experience (nurture). Discussion Questions: Character Lab is a non-profit bridging the science of character development with the daily work of teaching so all kids can fulfill their potential.Character Lab. Character education - the challenge - Academic Skills plus. This is part 1 in a series of brief articles on character education. 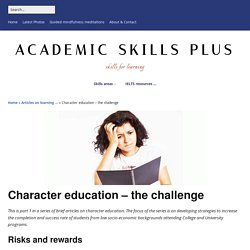 The focus of the series is on developing strategies to increase the completion and success rate of students from low socio-economic backgrounds attending College and University programs. Risks and rewards Universities and colleges around the world are increasingly committing significant resources to provide educational opportunities to students from low socio-economic backgrounds. With this commitment comes reward and challenges. Character education in the U.S. - Academic Skills plus. This article will examine the U.S. approach to promoting the development of character traits or skills in education. 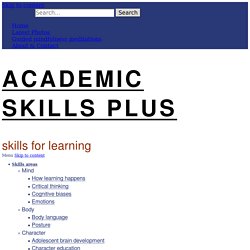 Character skills In the US, there is a recognition that the main problem in raising the educational level of children from disadvantaged backgrounds is not so much a problem of limited and unequal college access, but rather a problem of limited and unequal college completion. For this reason, significant private and public funding is being allocated in attempts to increase college completion rates. Character education - British approach - Academic Skills plus. This article is the third in a series on character education and will explore the British approach of integrating virtue ethics into schools. 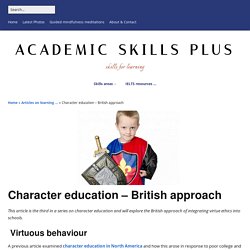 Virtuous behaviour A previous article examined character education in North America and how this arose in response to poor college and university completion rates. The development of character education in Great Britain came more out of concerns in regards to declining moral values than decreasing student completion rates. It is based on a neo-Aristotelian educational philosophy where the aim of mankind is seen as leading a flourishing life of happiness or contentment through the development of virtuous behaviour within one’s society.

Within this model, many of the character traits listed in the North American model are included but are defined as performance virtues which can be developed and used for either positive or negative ends (e.g. determination to win at any cost). In addition to performance virtues, there are: Moral virtues including: Character education - the role of mindfulness - Academic Skills plus. This article is the fourth in a series on character education and will explore the role of mindfulness meditation as a way to increase student success rates What it means to be mindful Mindfulness is a state of being open, attentive and actively engaged in the present moment. 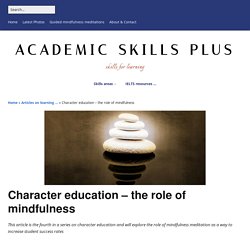 The traditional way of practicing mindfulness meditation is to first calm the body and then focus attention on a physical sensation, such as the feeling of breath as it enters and leaves the nose, or the rising and falling of our abdomen. Implementing character education - Academic Skills plus. This article draws connections between the three models explored, and presents an implementation strategy Review of the three models The three models explored in this series of articles, while appearing to be quite different to each other can also be seen as complementary. 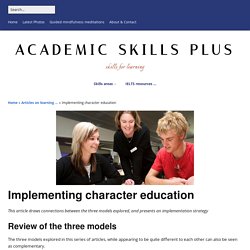 The North American model focuses on developing character skills such as perseverance, self-motivation and self-control as a way to compensate for the types of social problems experienced by students coming from disadvantaged backgrounds. The British model however focuses more on improving student behaviour by developing moral, civic and intellectual virtues such as courage, compassion, honesty and citizenship.

The third model examined brings mindfulness practice into the school curriculum with the aim of developing the students’ ability to identify non-productive habitual behaviours. Implementing a unified approach An implementation strategy Every educational institution is different. Step 1 – identify the scope. Why a good teacher must be a wise teacher. Virtues of a good teacher Cooke S. Virtue practical wisdom and character in teaching. SchoolsOfCharacterPDF. Populus Poll. 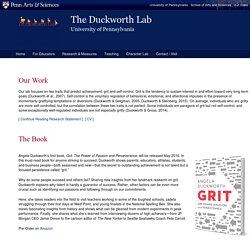 Grit is the tendency to sustain interest in and effort toward very long-term goals (Duckworth et al., 2007). Self-control is the voluntary regulation of behavioral, emotional, and attentional impulses in the presence of momentarily gratifying temptations or diversions (Duckworth & Seligman, 2005; Duckworth & Steinberg, 2015). On average, individuals who are gritty are more self-controlled, but the correlation between these two traits is not perfect: Some individuals are paragons of grit but not self-control, and some exceptionally well-regulated individuals are not especially gritty (Duckworth & Gross, 2014). [ Continue Reading Research Statement ] [ CV ] The Book Angela Duckworth's first book, Grit: The Power of Passion and Perseverance, will be released May 2016.

Why do some people succeed and others fail? Tolerating Ambiguity. The human mind is, for the most part, set on being in the know. 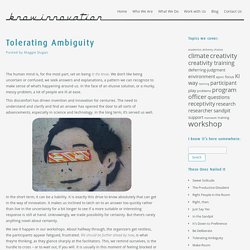 We don’t like being uncertain or confused, we seek answers and explanations, a pattern we can recognize to make sense of what’s happening around us. In the face of an elusive solution, or a murky, messy problem, a lot of people are ill at ease. This discomfort has driven invention and innovation for centuries. The need to understand and clarify and find an answer has opened the door to all sorts of advancements, especially in science and technology. In the long term, it’s served us well. In the short term, it can be a liability. We see it happen in our workshops. This is when we need tolerance for ambiguity. Grit and Self-Control. What are Grit and Self-Control? 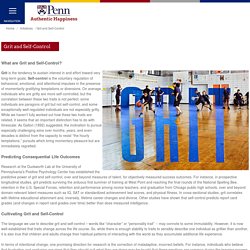 Grit is the tendency to sustain interest in and effort toward very long-term goals. Self-control is the voluntary regulation of behavioral, emotional, and attentional impulses in the presence of momentarily gratifying temptations or diversions. On average, individuals who are gritty are more self-controlled, but the correlation between these two traits is not perfect: some individuals are paragons of grit but not self-control, and some exceptionally well-regulated individuals are not especially gritty. Jubilee Centre for Character and Virtues. The maturation of incentive processing and cognitive control.