Costume Design vs. Character Design. I'll start this post by saying that I am not a costume or clothing designer. 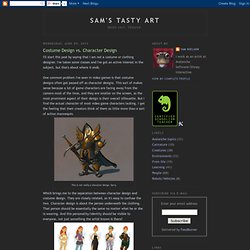 I've taken some classes and I've got an active interest in the subject, but that's about where it ends. One common problem I've seen in video games is that costume designs often get passed off as character designs. This sort of makes sense because a lot of game characters are facing away from the camera most of the time, and they are smaller on the screen, so the most prominent aspect of their design is their overall silhouette. But I find the actual character of most video game characters lacking. I get the feeling that their creators think of them as little more than a sort of action mannequin. A student just asked me how to get an Internship in a games company. I get this long mail from someone saying they really really really want to be a concept artist (in games or film). 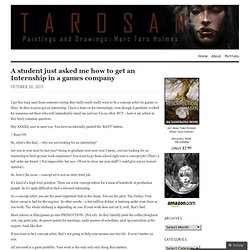 So they want to get an internship. I have a hate-on for internships, even though it probably worked for someone out there who will immediately email me and say I’m an idiot. BUT – here is my advice to this fairly common question: Hey XXXXX, nice to meet you. You have accidentally pushed the ‘RANT’ button. //Rant ON So, what’s the deal, – why are you looking for an internship? Are you in your next-to-last year? So, here’s the issue – concept art is not an entry level job. It’s kind of a high level position. As a concept artist, you are the most important link in the chain. Most interns in film/games go into PRODUCTION.

If you want to be a concept artist, that’s not going to help your resume one tiny bit. All you need is a great portfolio. This is one of the rare jobs where the only question is “Can you do it – in the style we want.” Designing a Dinosaur for Film – Free Creature Design Tutorial. Head Proportions in Character Design. Dota2CharacterArtGuide.pdf. Khaos Dwarf Concept Art! Hi Everyone, Well we promised more Khaos Dwarf content for you today, and we thought what better than to show you some of the fantastic concept art we are having done by Des Hanley. 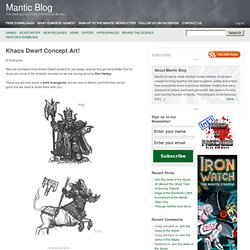 These are still very much a work in progress, but we here at Mantic just think they are so good that we have to share them with you: Let us know what you think. And keep checking back for even more great content! Mantic Games is all about providing the best fantasy and sci-fi miniatures and games at great value. The Mantic Team is made up of hobby enthusiasts and world-class creatives that bring you fantastic games and miniature ranges such as DreadBall – The Futuristic Sports Game, Kings of War and Warpath. We pride ourselves on ambition and innovation and we aim to create and deliver compelling worlds, amazing games and incredible miniatures. The Shape of Design. EDIT: Updated details on shipping, especially for our international friends. 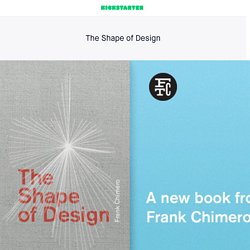 Hi. My name's Frank Chimero. I've spent the better part of the last two years writing and speaking on design and thinking about the topics that orbit the practice: storytelling, concept, craft, and improvisation. Academy of Art Character and Creature Design Notes. Indistinguishable From Magic - 5 Essential Superhero Redesigns! Illustrations give Sailor Moon a high-fashion makeover. Meant to Inspire, Not to Raise Ire. Jack Kirby-Julius Cesar costume designs. In 1969, Sheldon Feldner contacted Marvel Comics, asking if one of Marvel’s artists would be interested in designing costumes for a production of William Shakespeare’s play Julius Caesar by the University Theatre Company at Santa Cruz at the newly-built Cowell College of the University of California at Santa Cruz. 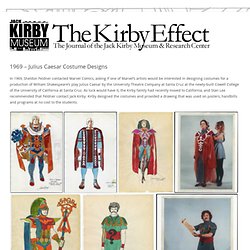 As luck would have it, the Kirby family had recently moved to California, and Stan Lee recommended that Feldner contact Jack Kirby. Kirby designed the costumes and provided a drawing that was used on posters, handbills and programs at no cost to the students. Character Designs - An Artist's Resource. 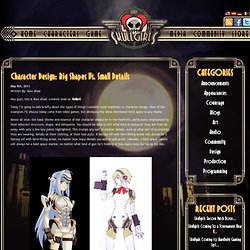 Today I’m going to talk briefly about the types of things I consider most important in character design. Most of the examples I’ll discuss today come from video games, but obviously the ideas mentioned here apply to any media. Above all else, the basic theme and essence of the character should be in the forefront, particularly emphasized by their inherent structure, shape, and silhouette. You should be able to tell what kind of character they are from far away, with only a few key points highlighted.

Let’s compare Persona 3’s Aegis with Xenosaga’s KOS-MOS. If you were to look at both characters from afar, you’d see that Aegis’s design is generally a lot simpler and more streamlined than KOS-MOS’s. I like characters that can sell their theme or design in a very simple, fundamental manner.