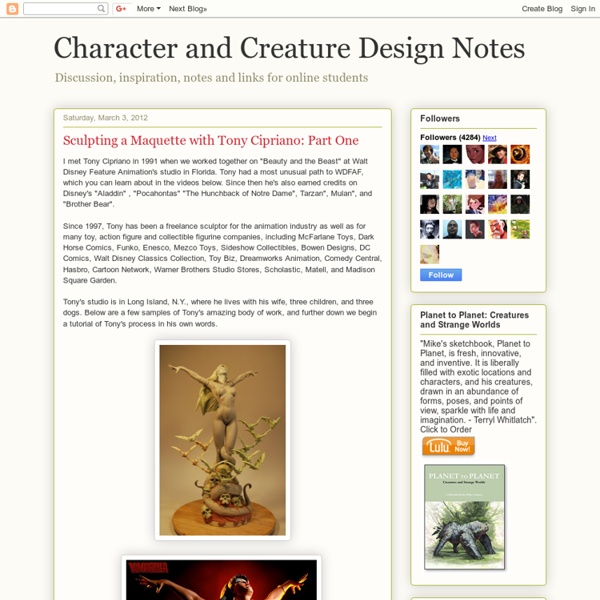 Disney's "Tangled" Character Design Development. Once "Rapunzel", then "Rapunzel Unbraided", and now "Tangled", Disney's 50th animated Feature film, set for release November 28th, has gone through many changes throughout it's years in development. One thing that hasn't changed much, though, is the artistic influence of two artists in particular. One was the French Rococo painter Jean-Honorer Fragonard, specifically one of his best known works; “The Swing” which inspired the lush fairy tale world that Rapunzel inhabits. The second is animation legend Glen Keane, who was the original driving force behind the film. Early concept art: Glen Keane's drawings: Final character: Flynn Rider (Students: keep these expression sheets in mind when doing your final projects!) Final Character: Mother Gothel: A few other character designs.

Pressure-sensitive freehand drawing of vector paths that are editable with the Illustrator Width tool? Reiterating a bit of what you've posted in your question..... By far the best tool I know of for Illustrator where natural drawing is concerned is DrawScribe from www.astutegraphics.com. Edit as of Jan 2014 DrawScribe has been folded into Astute's DynamicSketch plug in, same functionality shown here (plus more) but with a new name. This does everything you've outlined, as well as remaining standard AI art. (Of course it's easier if you zoom in to select those finicky width points. ;) ) I realize this is a third-party, $$$, solution. The WidthScribe Tools from Astute Graphics are indeed an easy way to apply width profiles to paths. One additional note on the plug ins above. If you must stick with the standard install of AI, there really isn't a great tool for what you are after.

Confessions of a Movie Buff November | 2010 | 8bitengine [update] check out my review on Tangled here In an earlier post I raised the 2D vs 3D debate again and questioned whether we would ever reach the lifeliness of 2D animation in 3D. I have only seen the trailers and the snippets, but I think the new Disney movie “Tangled” might be the future for 3D animation. I also noted that the Pixar movies is one of the few 3D animatiosn in the entire industry (including games) that matches the liveliness of 2D animation. I read this interview of Glenn Keane, Animation director on Tangled and general legendary animator) and from the get-go they set out to close the distance between the Classic 2D animation style and 3D. ["Oh, Glen, what I was wondering is: What is she thinking?" This is something I recognize from drawing faces and expressions myself. Now again, I cannot say for sure, because I do not have an inside view into the process that went about. Let’s see if the actual movie can bring back the feeling of Disney’s Golden age.

How to make birds fly good 10. Put some effort in Now we have gone some way to creating a realistic cycle, but what if we have to show our character flying under strain? Perhaps carrying something heavy. Click to Play Looking at the osprey's up/down humerus ratio as it struggles to get air bourne, I count a fairly constant 12 frames up to 20 frames down, (a ratio of 1/1.67). * Ospreys are medium/large bird, reaching 60cm length. for comparison an eagle owl can reach a length of 75cm ( humerus ratio1/1.7788 ), a barn owl reaches 45cm (humerus ratio 1/1.42) One would think it would make sense for a bird under strain to move it's wings faster to stay in the air. Another situation where a bird is exerting increased effort in flight is during take off. In the image above I have taken the highest and lowest points achieved by the wing tips (note: not the humerus). Firstly, let's consider the timing of the wing beats. The most significant change to the wings in this sequence is in the range of the wings.

kateinecuador Model Sheets 101-Part 2 We continue with our overview of model sheets as my students head into the last few days on their final projects. Part one can be found here. Expression Model Sheets are sometimes specially created as such, but often are compiled from scene samples, both in rough form and from final line/ clean up drawings. Note how some of these sheets include full body poses. Body language can add enormously to an expression. Just check out the body language of these characters and notice how well the action line and gestures harmonize with the facial expressions: Often times when two characters appear together frequently throughout a film, a duel model sheet featuring both characters can be created. Obviously there are several formats for creating an engaging and effective expression model sheet. Instead, vary the view to correlate with the emotion you are portraying.

Flash FX Animation: #10 Energy Strikes Now for the fun part -- color and special effects. First, I changed the BG to a dark color just so we can see it better. Then with the Edit Multiple Frames button activated, I re-colored it all white. Remember, what gives these energy bolts their color is their glows, the core base is usually white, just think about what gives lightsabers their color, it's not the 'blade' itself but the glow around it. Now select all those layers and drag them over to a new layer underneath (hold ALT while dragging select frames to instantly duplicate those keys). Then find the Filters tab, usually next to the Properties window, if not, go to the Window menu at the top and click on Properties > Filters. Pick the Glow filter. Pick your color and jack up the numbers and change the quality to High. PLus a couple more drawings to dissipate the line as it trails off.All the roughs put together looks like this (shot on 1s): Add them glows the same way. Slo-mo without glows: Slo-Mo:

Crazy Illustrations By Chow Hon Lam Chow Hon Lam is a t-shirt designer and a humorous illustrator from Malaysia. He has been completed this crazy project called Flying Mouse 365, which is create 1 design per day. I hope his illustrations can bring some smile and entertainment to the world. About the author .jb1er. How to Draw Caricatures: Relationship of Features This series of “How to Draw Caricatures” tutorials are a just a small taste of a larger and much more in-depth book I wrote called The Mad Art of Caricature! The book is 175 full-color pages, lavishly illustrated and contains greatly expanded explanations of the concepts presented in these tutorials, as well and a great deal of additional material on caricaturing other facial features, posture, hands, expression and more, techniques on drawing from live models, doing caricature for freeplace illustration and for MAD Magazine. This is a must have book for anyone interested in caricature, cartooning or humorous illustration. You can order it online here. Part Two: Relating the Features Previously I mentioned how the relationships between features are the driving force behind caricature: “Caricature is not about choosing one feature and making it bigger, it’s about all the features together and how they relate to one another.” Classic Portrait Proportion and Observation Action and Reaction

What Men Really Want | Make it Mad There was once a time that I considered myself a true gentleman. Not only that, but I thought I was a pretty darn good Christian too. (Even though I’ve been saved three different times. The third time was the charm – I think is what they say – but I haven’t found it anywhere in the Bible yet.) But something wasn’t right. I didn’t want to grab her ass. Rewind to an evening with a few drinks and a pretty girl I’d met earlier that day. I didn’t want that. Other men want this sort of offer from a woman, right? Why didn’t I? I wanted sex. Because I am a man. And the truth is we want to have sex. But damn it, we want so. much. more. Hollywood has lied to us. And we are very pissed off about it. Because the lie is good and easy to believe, and no man likes to be taken advantage of. So we turn to pornography and strip clubs and Maxim magazine because it’s easier that way. Pornography and magazines and movies have taught us as men that sex is what women are good for. Real men do not want this.

Animopus la quaintrelle | I finally remembered to save shots of a piece...