ELA 6.5 The student will read and demonstrate comprehension of a variety of fictional texts, narrative nonfiction, and poetry.
g) Explain how character and plot development are used in a selection to support a central conflict or story line.

STORY SPINNERS (CREATIVE WRITING PROMPTS) Predictograms Improve Reading Comprehension. Legends - The Robin Hood Pages. Sources · Under the Greenwood Tree The Robin Hood of modern folk-mythology is a creature built up, generation by generation, to meet the needs and desires of his audience. 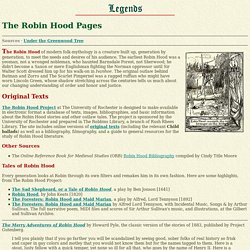 The earliest Robin Hood was a yeoman, not a wronged nobleman, who haunted Barnsdale Forest, not Sherwood; he didn't become a Saxon or mere Englishman fighting the Norman oppressor until Sir Walter Scott dressed him up for his walk-on in Ivanhoe. The original outlaw behind Batman and Zorro and The Scarlet Pimpernel was a ragged ruffian who might have worn Lincoln Green, whose shadow stretching across the centuries tells us much about our changing understanding of order and honor and justice.

The Robin Hood Project at The University of Rochester is designed to make available in electronic format a database of texts, images, bibliographies, and basic information about the Robin Hood stories and other outlaw tales. Other Sources Tales of Robin Hood Robin Hood by J. The One Essential Reference Robin Hood by J.C. Education World: Dramatizing Folktales, Legends, and Myths. Inspired by Muses, Graces and Fates. Instruction Engage. 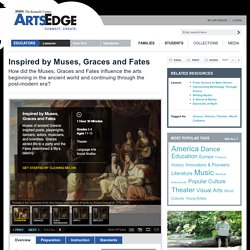 My Mighty Girl Book List: Ages 11-14 - I Think We Could Be Friends. Share with a friend or save for later... 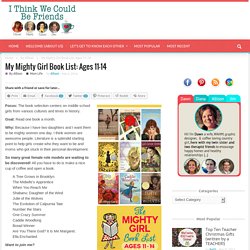 Focus: The book selection centers on middle school girls from various cultures and times in history. Goal: Read one book a month. Why: Because I have two daughters and I want them to be mighty women one day. I think women are awesome people. Literature is a splendid starting point to help girls create who they want to be and moms who got stuck in their personal development. So many great female role models are waiting to be discovered! A Tree Grows in Brooklyn The Midwife’s Apprentice When You Reach Me Shabanu: Daughter of the Wind Julie of the Wolves The Evolution of Calpurnia Tate Number the Stars One Crazy Summer Caddie Woodlong Bread Winner Are You There God? Fun Folk Tales Game - Teach, Assess, Analyze with the Largest K-12 Resource Catalog. MythologyTeacher.com. Barbie, America's favorite doll, has been in a state of evolution ever since she first rolled off the assembly line. 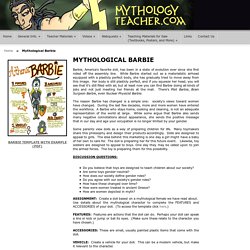 While Barbie started out as a materialistic airhead equipped with a plasticly perfect body, she has gradually tried to move away from this image. Her body is still plasticly perfect, and if you squeeze her head, you will see that it's still filled with air, but at least now you can find Barbie doing all kinds of jobs and not just meeting her friends at the mall. There's Pilot Barbie, Brain Surgeon Barbie, even Nuclear Physicist Barbie. The reason Barbie has changed is a simple one: society's views toward women have changed. During the last few decades, more and more women have entered the workforce. Project: Investigate Greek Mythology. The stories of the Greek myths are all that remain of an ancient religion. 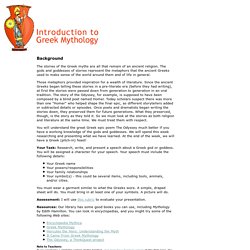 The gods and goddesses of stories represent the metaphors that the ancient Greeks used to make sense of the world around them and of life in general. Those metaphors provided inspiration for a wealth of literature. Since the ancient Greeks began telling these stories in a pre-literate era (before they had writing), at first the stories were passed down from generation to generation in an oral tradition. The story of the Odyssey, for example, is supposed to have been composed by a blind poet named Homer. Theseus: Lord of Athens. STORY SPINNERS (CREATIVE WRITING PROMPTS) Myths, Folktales, and Fairy Tales Home. Welcome to the Myths, Folktales and Fairy Tales Internet project. 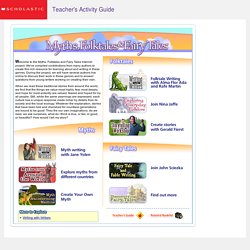 We've compiled contributions from many authors to create this rich resource for learning about and writing in these genres. During the project, we will have several authors live online to discuss their work in these genres and to answer questions from young writers working on creating their own. The Mighty Boy Reading List: Ages 9-12 - I Think We Could Be Friends. Share with a friend or save for later... 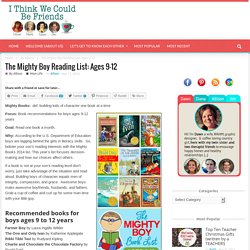 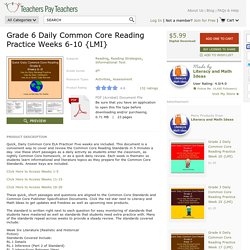