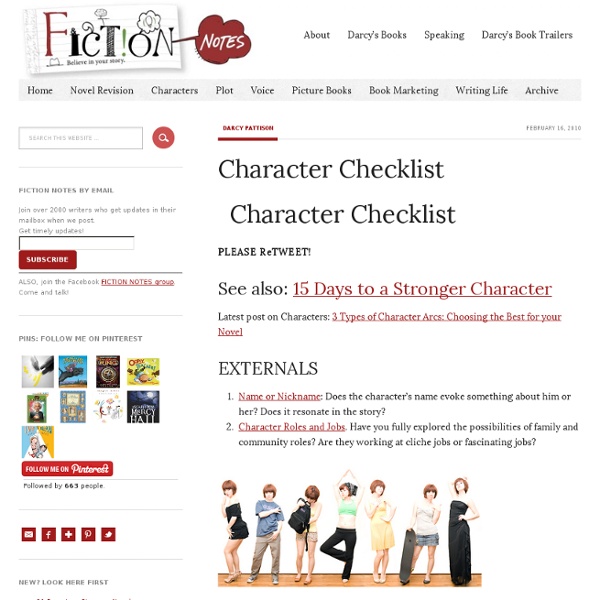 How to Write a Character From Start to Finish The best fiction is about a character who changes in some significant way. The selfish brute learns to put others first. The woman marrying for money decides to marry for love. We love to see characters transformed. —by Jeff Gerke Most of the time, main characters in fiction are changing for the better. But there’s also room for characters who change for the worse. Perhaps most intriguing of all is a “bad” character who flirts for a while with the idea of being good, but then decides that his true self is on the dark side of the street. Of course, not every story has to be about a character who changes. Whether your protagonist ultimately turns toward or away from the light will be up to you, but we’ll look at ways to send her on a journey in which she’s transformed. The Inner Journey In fiction terms, a character’s transformation is called his inner journey or character arc. The heart of this system is your main character’s inner journey. The Nexus The Seeds of Change The Role of Change

The Top Ten Mistakes New Fiction Authors Make by Sally Zigmond Are you wondering why your short stories keep coming back with polite rejection letters? It could be that one of these ten "fatal errors" is standing between you and publication! Lack of Editing. The best writers re-write and re-write. New writers tend to think that editing merely means a brief read through for typos and spelling errors. Dull Writing. Too Much Irrelevant Detail. No Attention to Language. Absence of Imagery and Reliance on Cliches. No Sense of Place. No Shape or Structure. Poor Dialogue Skills. Lack of Technical Knowledge. My Top Tip. Copyright © 2002 Sally ZigmondThis article may not be reprinted without the author's written permission. Sally Zigmond has had nonfiction and fiction published in several magazines, as well as anthologies, and has won several major short story competitions.

Spice Up Your Writing With Dialogue by Judy Cullins Does your chapter sound like a report? Does it go on and on with past tense sentences that tell, rather than show? To spice up your self help, non-fiction or fiction book and even promotional writing, you need to use much more dialogue. Why? If your aim your book at agents and publishers, the first action acquisition editors make is to find a section of dialogue. It is difficult to put just the right words into dialogue--to convey character and emotion. Tips: 1. "You can't be serious, she said in astonishment." So, show how astonished through dialogue or beat. 2. Stop using -ly verbs such as "I'm afraid it's not going well," he said grimly." Examples: Percy burst into the zoo keeper's office. "Is something wrong, sir?" "Don't you realize you're killing those poor innocent creatures, you heartless fascist? 3. You have heard about show, don't tell and all -ly forms tell. Condescending example: "I'm afraid it's not going very well, "he said grimly. 4. 5. 6. 7. 8.

How To Write Great Characters | Special Interest | WritingRoom Great characters don’t just happen, they are more than just written-they are born. Scarlet O’Hara, The Wicked Witch of the West, Beetlejuice, Mary Poppins, and Tony Montana all had obvious needs, wants, fears and idiosyncrasies that made them unique and recognizable. And although they live purely on paper and film, their characterization is built with such realism it is as if they could be the nanny next door, the spoiled brat in the big house down the street or the Mafioso in the neighboring town. That is the magic that happens with writing the perfect character. Developing interesting, colorful characters is not an easy task. By remembering six core issues when writing can help bring your characters off the page and into the coffee shop at the end of the block. DRAMATIC FUNCTION: The dramatic function of a character is part of the story’s logistical structure. GIVE THEM LIFE: You should know your character like you know yourself.

Beginners' four faults As an editor, I know when I am reading someone's first novel. I have nicknames for the four give-away faults beginners make: (1) Walk and Chew Gum (2) Furry Dice (3) Tea, Vicar? (4) Styrofoam. I see at least one of these in every manuscript where the author has not mastered the craft of writing before submitting in his or her work. What are these four faults and, more importantly, how can you cure them? (1) Walk and Chew GumThe writer has not integrated action and dialogue, internal monologue and action, or internal monologue with dialogue. "If you think you're going to town you'd better thing again," said Ralph. Not integrating action and dialogue makes for jerky, lifeless prose. "If you think you're going to town you'd better think again," Ralph snapped, putting down his can of beer. This might not be award-winning prose, but it reflects the reality of the action and feelings better by having action, thought and dialogue knitted together. She snatched the gun and aimed. (3) Tea, Vicar?

Seven Keys to Writing Good Dialogue | Nathan Bransford - Blog It goes without saying (but watch me say it) that dialogue is one of the very most crucial elements in a novel. Great dialogue can make a novel sing. Bad dialogue can sink it like a stone. Here are a few ideas on what makes good dialogue work: 1. Good dialogue is not weighed down by exposition When the dialogue is carrying exposition and trying to tell the reader too much, characters end up saying a lot of very unnatural and unwieldy things. "Remember that time we stole the frog from Miss Jenkins and she ended up giving us two hours of detention and that's how we met?" So much of this dialogue would already be already apparent to the characters. Exposition and dialogue only really mesh when one character genuinely doesn't know what the other character is telling them and it's natural for them to explain at the moment they're explaining it. 2. Sometimes you'll see characters in novels bantering back and forth in a way that is meant to reveal character or fill space. 3. 4. 5. 6. 7.

Name That Character: Top Ten Tips There are a plethora of movie character names that become everlasting brands in American culture: Rocky, Yoda, Forrest Gump, and Shrek to name a few. And when it comes to naming characters, you want to choose wisely, which is no easy task. Literature: Lennie Small: the mentally disabled but physically strong protagonist in John Steinbeck’s 1937 novella Of Mice and Men. Drama: Willy Loman: the elderly salesman lost in false hopes and illusions in Arthur Miller’s 1949 play Death of a Salesman. Film: “The Dude”: the unemployed L.A. slacker and avid bowler in Joel and Ethan Coen’s 1998 film The Big Lebowski. Steinbeck’s Lennie is a gentle giant who is “Small” of mind, with a simple dream of tending rabbits. Choosing the right name for a character is key. There’s a lot in a name, and the perfect name can make a world of difference, so here are some helpful tips – the Top Ten Dos and Don’ts – in naming characters. Tip 1: That Reflect Personality Tip 2: Choose a Name by Meaning

Using Excel To Outline Your NaNoWriMo Novel: Defeating the sprawl We're smack in the middle of NaNoWriMo and, I hope you're faring better, but my novel has grown a mite cluttered. I did have an outline when I began (really, I did!) and I have followed it ... more or less ... but my characters had ideas of their own. I've ended up adding new scenes and modifying old ones. The result looks a bit like a ball of wool after a cat played with it. Normally I'd go back and tidy things up by re-writing what I have so far. Outlining the NaNoWriMo Novel: Excel To The Rescue The solution? It's marvelous! When I first saw Jeffrey's spreadsheet I was a bit intimidated, but just hold on, everything is simple and easily explained. Here's a link to an example of one of Jeffrey's spreadsheets, this one is of the movie Independence Day: Outline of Independence Day done in Excel. Let's step through Jeffrey's spreadsheet column by column: Column 1 - Tells you were you are in the act structure. Column 2 - Page length estimates for each scene. Column 3 Column 4 - Your slug line.

Characters with Character: Random Personality Generator If you're enjoying the content here, check out our new site, Thoughtcrime Games. Thanks for visiting! If you're new here, you may want to subscribe to my RSS feed. Thanks for visiting! I don’t know about you but when I sit down for a one-shot game with a pregen character, I can’t always come up with a unique and interesting personality on the fly. Sometimes the class, race and skill combo strikes a chord, but usually it’s just numbers. Using the Generator is a snap. Motivation: What is it that really gets your character’s motor running? Instinct: What is your character’s first reaction to a threat (physical or otherwise)? Approach: What archetype is your character best known for being? Now just because every character in D&D is combat-capable does not necessarily make them all warrior-type personalities. Raven, Revenant Tempest FighterMotivation 8 (Intense Experience); Instinct 10 (Invoke Tradition); Approach 12 (Ethereal Mystic) Most living beings fear death. Serious Skills Similar Posts:

Writing builds character. | Andi Marquette Hi, peeps! If you’re headed to the Left Coast Lesfic Conference, I’ll see you there! I’m slated to do a workshop on character. So I’ve spent some time thinking about how to create and convey character, how to capture it, and how to hold on to it and make it arc logically and effectively. I’m one of those writers who thinks that setting is absolutely key to your story. If you’ve decided on a setting for your story, and you’ve got a rough idea of a plot and some rough ideas about characters, then start fleshing out your main character. The big, existential question is always: Who is this person? source So let’s dissect that. 1) Name? 2) Where does your character live and is that going to be the main setting of your story? 3) Place of origin? 4) Age? 5) Background? 6) Occupation? 7) Personality traits? 8 ) Who else is in your character’s life? 9) What does your character look like? 10) Habits/quirks? Final thought on that? A few other links to help you think about writing characters: Like this:

Write a Novel Write a Novel is a form of open courseware: Learning materials placed online for free use by anyone who wishes to do so. The guide contains 18 items, PDF documents that give you some basic information on topics related to writing fiction in general and novels in particular. Each item includes one or more assignments based on the material you've read. These are the terms of use: 1. 2. 3. 4. 5. As a lifelong writer, I wish you every success in any form of writing you pursue.