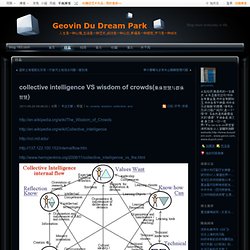 The Wisdom of Crowds David Edery, who was until recently part of the CMS staff and now works for Microsoft, has been generating some interesting discussion over on his blog, Game Tycoon, about how games might harness "the wisdom of crowds" to solve real world problems. It's an idea he's been promoting for some time but I only recently had a chance to read through all of his discussion. [1208.4091] Wisdom of groups promotes cooperation in evolutionary social dilemmas. Wisdom of the Crowd vs. Collective Intelligence. Collective Intelligence vs. The Wisdom of Crowds. Wisdom and Folly of the Crowds. The Wisdom of Crowds: Myth or Reality?

By Rod Collins With the rapid expansion of the digital technologies of mass collaboration, our capacity to tap into what has become known as the “wisdom of crowds” has become a common experience. 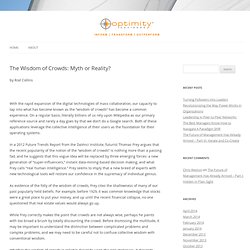 On a regular basis, literally billions of us rely upon Wikipedia as our primary reference source and rarely a day goes by that we don’t do a Google search. If Crowds Are Wise, Why Isn't Congress? We’ve all heard of the “wisdom of crowds” especially after James Surowiecki’s 2004 best-selling book by that name and Scott Page’s 2007 “The Difference.” 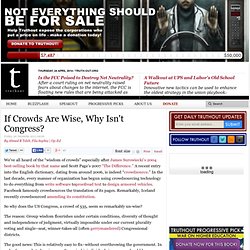 A recent entry into the English dictionary, dating from around 2006, is indeed “crowdsource.” In the last decade, every manner of organization has begun using crowdsourcing technology to do everything from write software toproofread text to design armored vehicles. Facebook famously crowdsources the translation of its pages. Remarkably, Iceland recently crowdsourced amending its constitution. So why does the US Congress, a crowd of 535, seem so remarkably un-wise? The reason: Group wisdom flourishes under certain conditions, diversity of thought and independence of judgment, virtually impossible under our current plurality voting and single–seat, winner-takes-all (often gerrymandered) Congressional districts.

The good news: This is relatively easy to fix–without overthrowing the government. What About Congress? Need Better Ideas? Ask More Women. There’s an old adage that behind every great man is a great(er) woman. 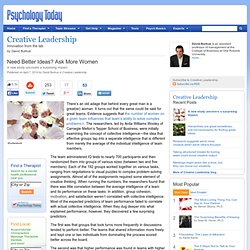 It turns out that the same could be said for great teams. Evidence suggests that the number of women on a given team influences that team's ability to solve complex problems. Harness Collective Wisdom. "Jamais on ne corrompt le peuple, mais souvent on le trompe et c'est alors seulement qu'il paraît vouloir ce qui est mal"

“Whereas psychologists tend to view humans as fallible and sometime even self-destructive, economists tend to view people as efficient maximisers of self-interest who make mistakes only when imperfectly informed about the consequences of their actions.” George Loewenstein – noosquest

12 Principles 4 Wise Swarm. Free Card The above is a depiction of the free card that can be printed off and laminated by anyone. Click on the card to reach a printable version with instructions for trimming and lamination. A French version will be posted shortly, and then other languages as they appear. Giving your card away over and over is encouraged. Will Keepen Describes Twelve Principles. Harnessing the Collective Intelligence of the Crowd: Be a Curator Not an Expert - Prodigy Network - EN.

Last month at PSFK’s annual conference Prodigy Network’s Founder and CEO, Rodrigo Niño, spoke about the power of the collective intelligence, and posed the following question, “How can we better utilize the intelligence of the crowd to create positive change in our society?” 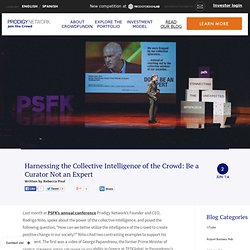 Niño cited two contrasting examples to support his statement. The first was a video of George Papandreou, the former Prime Minister of Greece, speaking about the financial instability in Greece at TEDGlobal. In Papandreou’s speech he explained how a group of political leaders and decision makers were trapped by their collective ignorance ultimately leading to Europe’s recent economic crisis.

Forget The Wisdom of Crowds; Neurobiologists Reveal The Wisdom Of The Confident. Way back in 1906, the English polymath Francis Galton visited a country fair in which 800 people took part in a contest to guess the weight of a slaughtered ox. 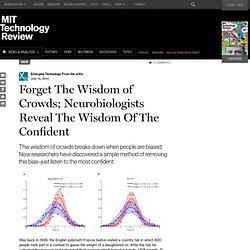 After the fair, he collected the guesses and calculated their average which turned out to be 1208 pounds. ‘Wisdom of the crowd’: The myths and realities. Is The Lord of the Rings the greatest work of literature of the 20th Century? 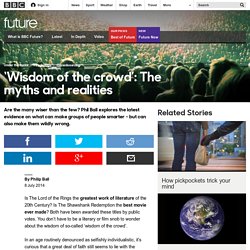 Is The Shawshank Redemption the best movie ever made? Both have been awarded these titles by public votes. You don’t have to be a literary or film snob to wonder about the wisdom of so-called ‘wisdom of the crowd’. In an age routinely denounced as selfishly individualistic, it’s curious that a great deal of faith still seems to lie with the judgement of the crowd, especially when it can apparently be far off the mark. Yet there is some truth underpinning the idea that the masses can make more accurate collective judgements than expert individuals. Inside-Knowlege-3-08.pdf (Objet application/pdf) A society governed by the people's wisdom... How crowds, not doctors or supercomputers, could diagnose rare diseases.

When it comes to serious medical conditions, you probably want a doctor – or at least a medically trained supercomputer – delivering your diagnosis. 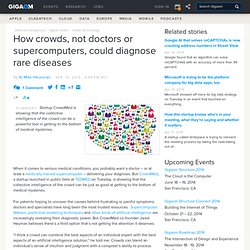 But CrowdMed, a startup launched in public beta at TEDMED on Tuesday, is showing that the collective intelligence of the crowd can be just as good at getting to the bottom of medical mysteries. For patients hoping to uncover the causes behind frustrating or painful symptoms, doctors and specialists have long been the most trusted resources.

Supercomputer Watson, predictive modeling techniques and other kinds of artificial intelligence are increasingly revealing their diagnostic power. But CrowdMed co-founder Jared Heyman believes there’s a third option that’s not getting the attention it deserves. Welcome to the Good Judgment Project. I came to the Good Judgment Project (GJP) two years ago, in Season 2, as a forecaster, excited about contributing to an important research project and curious to learn more about my skill at prediction. 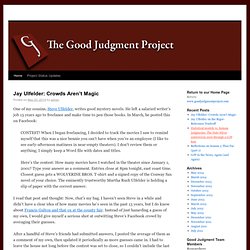 I did pretty well at the latter, and GJP did very well at the former. I’m also a political scientist who happened to have more time on my hands than many of my colleagues, because I work as an independent consultant and didn’t have a full plate at that point. So, in Season 3, the project hired me to work as one of its lead question writers. Going into that role, I had anticipated that one of the main challenges would be negotiating what Phil Tetlock calls the “rigor-relevance trade-off”—finding questions that are relevant to the project’s U.S. government sponsors and can be answered as unambiguously as possible. That forecast was correct, but even armed with that information, I failed to anticipate just how hard it often is to strike this balance.

CrowdMed Patient Diagnosis. Democracy And The Wisdom Of Crowds. “The Wisdom of Crowds: Why the Many Are Smarter Than the Few and How Collective Wisdom Shapes Business, Economies, Societies and Nations”, published in 2004, is a book by James Surowiecki. It discusses, often using anecdotes, that under certain conditions, crowds of people make better decisions than experts. In how far can we (mis)construe this as further proving the democratic doctrine? A Practical Vision of Citizen-Led Politics. 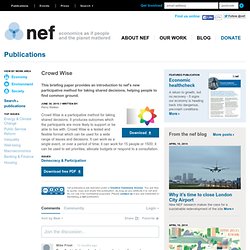 June 30, 2010 // Written by: Perry Walker Crowd Wise is a participative method for taking shared decisions. It produces outcomes which the participants are more likely to support or be able to live with. Issues. Liberating Structures - 13. Wise Crowds. Wise Crowds Tap the Wisdom of the Whole Group in Rapid Cycles (15 min. per person) Every journey has a secret destination of which the traveler is not aware. – Martin Buber What is made possible?

Wise Crowds make it possible to instantly engage a small or large group of people in helping one another. You can set up a Wise Crowds consultation with one small group of four or five people or with many small groups simultaneously or, during a larger gathering, with a group as big as one hundred or more people. Five Structural Elements – Min Specs for Small Wise Crowds. Smart Mobs: The Next Social Revolution - Howard Rheingold - Google Books. 1204.3463.pdf (Objet application/pdf) How social influence can undermine the wisdom of crowd effect. Author Affiliations Edited by Burton H. Singer, University of Florida, Gainesville, FL, and approved April 13, 2011 (received for review June 23, 2010) Abstract. Dantier_intro_psycho_foules.pdf (Objet application/pdf) Dynamics of Crowd-Minds: Patterns of Irrationality in Emotions, Beliefs And Actions (World Scientific Series on Nonlinear Science, Series A) (Wolrld Scientific Series on Nonlinear Science: Series a): Andrew Adamatzky: 9789812562869: Amazon.com.

Power: 2012. The Wisdom of Crowds - by James Surowiecki. Mind-blowing examples of how groups of diverse people acting independently are smarter than any one person in the group. Has huge implications for management, markets, decision-making, and more. Under the right circumstances, groups are remarkably intelligent, and are often smarter than the smartest people in them. Groups do not need to be dominated by exceptionally intelligent people in order to be smart. Even if most of the people within a group are not especially well-informed or rational, it can still reach a collectively wise decision. When our imperfect judgements are aggregated in the right way, our collective intelligence is often excellent. We assume that the key to solving problems or making good decisions is finding that one right person who will have the answer. The best way for a group to be smart is for each person in it to think and act as independently as possible. ** Chapter 1.

Wisdom of the Crowds. The Wisdom of Crowds. Collective actions and collisions on the net. Crowdfunding. Crowdsourcing. James Surowiecki: When social media became news. James Surowiecki. James Michael Surowiecki (/ˌsʊəroʊˈwɪkiː/ SOOR-oh-WIK-ee; born April 30, 1967) is an American journalist. He is a staff writer at The New Yorker, where he writes a regular column on business and finance called "The Financial Page".[1] Background[edit] Surowiecki was born in Meriden, Connecticut and spent several childhood years in Mayagüez, Puerto Rico where he received a junior high school education from Southwestern Educational Society (SESO). On May 5, 1979, he won the Scripps-Howard Regional Puerto Rico Spelling Bee championship. James Surowiecki: "The Wisdom Of Crowds" (Doubleday)

The Wisdom of the Crowd. Details Performed at TEDx Liverpool: in which I show that the crowd isn't always wise by conducting a quiz live on stage, collecting answers over Twitter. Email comments! • Booking me for conferences Frequently Asked Questions Were those results really pulled in live? Yes, honestly. What presentation software were you using? Category:Crowd psychology. Category:Social psychology. From Wikipedia, the free encyclopedia Subcategories This category has the following 43 subcategories, out of 43 total. Pages in category "Social psychology" The Wisdom of Crowds, Revisited: When The Crowd Goes From Wise to Wrong. The Wisdom of Crowds. La Sagesse des foules. Un article de Wikipédia, l'encyclopédie libre.