TRIP DOWN MEMORY LANE: PRE-COLONIAL AFRICAN KINGDOM OF KONGO: ONCE A GREAT COLOSUS. Kingdom of Kongo also known as Kongo dya Ntotila or Wene wa Kongois ranks among the most famous kingdoms in sub-Saharan Africa. 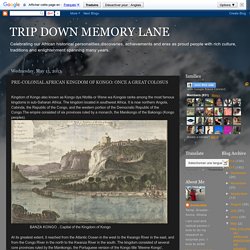 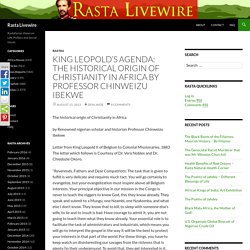 Vera Nobles and Dr. Chiedozie Okoro. “Reverends, Fathers and Dear Compatriots: The task that is given to fulfill is very delicate and requires much tact. King Leopold’s Agenda: The historical origin of Christianity in Africa by Professor Chinweizu Ibekwe. Christian Cross In The Temple To Isis, Horus And Osiris On Philae.. Stock Photo, Picture And Royalty Free Image. Image 14477951. Le Temple d'Isis, Horus et.. 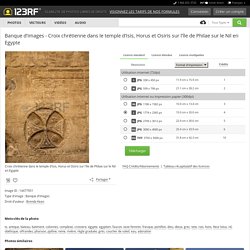 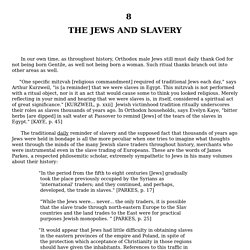 Such ritual thanks branch out into other areas as well. "One specific mitzvah [religious commandment] required of traditional Jews each day," says Arthur Kurzweil, "is [a reminder] that we were slaves in Egypt. This mitzvah is not performed with a ritual object, nor is it an act that would cause some to think you looked religious. Merely reflecting in your mind and hearing that we were slaves is, in itself, considered a spiritual act of great significance. 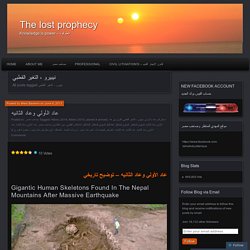 وهو السيناريو المتوقع جدا ونصيحتي لسكان الاسكندريه والسواحل الشماليه لمصر بالابتعاد عنها واللجوء لمناطق بعيده عن الساحل والافضل ان تكون مرتفعه. Spiritual Meaning of Eye. Eye That the eye signifies the understanding is because the sight of the body corresponds to the sight of its spirit, which is the understanding; and because it corresponds, in the Word the understanding is signified by the eye in almost every place where it is mentioned, even where it is believed to be otherwise; as where the Lord says in Matthew:-- 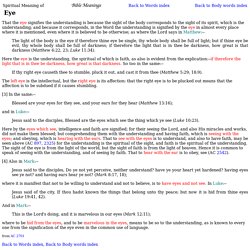 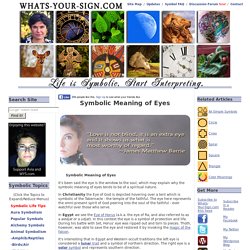 In Christianity the Eye of God is depicted hovering over a tent which is symbolic of the Tabernacle - the temple of the faithful. The eye here represents the omni-present spirit of God peering into the soul of the faithful - ever watchful over those who serve. In Egypt we see the Eye of Horus (a.k.a. the eye of Ra, and also referred to as a wedjat or a udjat). In this context the eye is a symbol of protection and life.

It's interesting that in Egypt and Western occult traditions the left eye is considered a lunar trait and a symbol of northern direction. Wacom. The Upper Forehead Chakra. There would seem to be a number of distinct chakras in a line running vertically down (or behind) the middle of the Forehead [Goswami, p.293; Paulson, pp.127-8]. 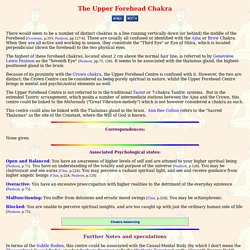 These are usually all confused or identified with the Ajna or Brow Chakra. When they are all active and working in unison, they constitute the "Third Eye" or Eye of Shiva, which is located perpendicular (down the forehead) to the two physical eyes. The highest of these forehead chakras, located about 2 cm above the normal hair line, is referred to by Genevieve Lewis Paulson as the "Seventh Eye" [Paulson, pp.75, 128].

The Ancient Symbol of The Knights Templar’s Red Cross. The symbol of the cross is universal. 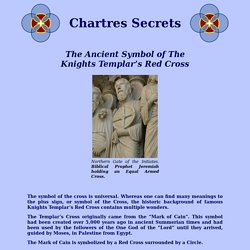 Whereas one can find many meanings to the plus sign, or symbol of the Cross, the historic background of famous Knights Templar’s Red Cross contains multiple wonders. The Templar’s Cross originally came from the “Mark of Cain”. This symbol had been created over 5,000 years ago in ancient Summerian times and had been used by the followers of the One God of the “Lord” until they arrived, guided by Moses, in Palestine from Egypt.

The Upper Forehead Chakra. Chapter 4 - Right Hand and Forehead - Mark of the Beast. Chapter 4 Many people insist that the Mark has to be an implant in the skin. 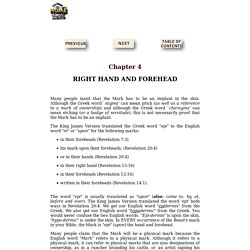 From this it is evident why the forehead, when said of the Lord, who is represented by Aaron, signifies the Divine love. [2] As the forehead with man corresponds to his love, therefore they who are in celestial love (that is, in love to the Lord from the Lord) are said to have a mark on their foreheads, by which is signified that they are under the Lord's protection, because they are in His love, as in the following passages:-- [4] In Moses:-- 2012; Prophecies of the Emerging Golden Age. Transcending the darkness before the glorious dawn ! The global crisis situation is worsening at an alarming rate – climate change, droughts, flooding, wars, terrorism … – drinking water shortages, major famines, human and animal pandemics will soon follow The established political and economic systems will not be able to cope with the approaching global mega-crisis. Their collapse is immanent !

Those who survive the extreme tribulations which are to come and the radical decimation of the world's population, will experience a profound transformation of heart and mind enabling a new social system and a true Golden Age to emerge. Who Was Scheherazade? - Scheherazade Foundation. "Scheherazade Went on with Her Story". Illustration from "Arabian Nights" by Virginia Frances Sterrett (1900-1931). Penn Publishing Company (1928). Scheherazade was the famed storyteller of The One Thousand and One Nights that include the tales of Aladdin and His Magic Lamp, Ali Baba and The Forty Thieves and Sinbad the Sailor. The name was chosen to embrace the character and narrative elements of our workshops, the idea of overcoming fear through story-telling, and the historical background of The One Thousand and One Nights travelling from Asia into Europe on the Silk Road. According to the frame tale of The One Thousand and One Nights, many years ago, the king in ancient Persia discovered that his wife had been cheating on him.

Scheherazade was a beautiful, well-read and intelligent young woman who was a gifted storyteller, weaving stories with spiritual and moral lessons for her listeners. History of Jihad against the Egyptian Coptic Christians (640) The four centuries of ceaseless warfare between the Byzantine (Eastern-Roman) Empire and the Sassanid Persian Empire in the 6th and 7th centuries had weakened both empires. It was at this unfortunate juncture that the Muslim Arabs pounced on both empires in fourth decade of the 7th century (641 C.E.). After their conquest of the Byzantine provinces of Jordan, Syria, Lebanon, and Palestine (today's Israel), they invaded Egypt in December 641 C.E.

The persecuted Copts were the original inhabitants. Egypt, before the Islamic invasion was not an Arab country. Many of us are under a mistaken impression that Egyptians are Arabs. Dingirs. Sumerian Signs: Determinatives Logographic sign used to help identify another sign's meaning Not pronounced; just clarifies meaning Common examples: god, man, woman, place, wood Since these are a special use of a logogram, we can use capital letters for transliteration as well. DINGIR ("god, goddess") precedes the name of a diety Figure A Figure B. Igigi. Igigi was a term used to refer to the gods of heaven in Sumerian mythology.

Though sometimes synonymous with the term "Annunaki," in one myth the Igigi were the younger gods who were servants of the Annunaki, until they rebelled and were replaced by the creation of humans.[1] Atrahasis[edit] Tablet of Destinies (mythic item) In Mesopotamian mythology, the Tablet of Destinies (Sumerian: Dup Shimati; not, as frequently misquoted in general works, the Tablets of Destiny) was envisaged as a clay tablet inscribed with cuneiform writing, also impressed with cylinder seals, which, as a permanent legal document, conferred upon the god Enlil his supreme authority as ruler of the universe. In the Sumerian poem Ninurta and the Turtle it is the god Enki, rather than Enlil, who holds the tablet.[1] Both this poem and the Akkadian Anzû poem share concern of the theft of the tablet by the bird Imdugud (Sumerian) or Anzû (Akkadian).[2] Supposedly, whoever possessed the tablet ruled the universe.[3] In the Babylonian Enuma Elish, Tiamat bestows this tablet on Kingu and gives him command of her army.

Marduk, the chosen champion of the gods, then fights and destroys Tiamat and her army. Dilmun. Dilmun or Telmun[2] was a Semitic civilization in Eastern Arabia.[1][3] Dilmun was an important trading centre[1] which at the height of its power controlled the Persian Gulf trading routes.[1] The Sumerians regarded Dilmun as holy land.[4] The scholarly consensus is that Dilmun encompassed Bahrain, Kuwait,[5][6] Qatar and the coastal regions of the Eastern Province of Saudi Arabia.[7] Dilmun was mentioned by Mesopotamian civilizations as a trade partner, a source of the metal copper, and an entrepôt of the Mesopotamia-to-Indus Valley Civilization trade route.

Nammu. For the village in Burma, see Nammu, Burma. In Sumerian mythology, Nammu (also Namma, spelled ideographically 𒀭𒇉 dNAMMA = dENGUR) was a primeval goddess, corresponding to Tiamat in Babylonian mythology. Incipit. Thalassa (mythology) Thalassa defends herself in Aesop's fable, "The Farmer and the Sea" Two rather similar fables are recorded by Babrius.

In one, numbered 168 in the Perry Index, a farmer witnesses a shipwreck and reproaches the sea for being “an enemy of mankind”. Pyramidion. Amentet, Ancient Egyptian Goddess of the Dead. ByCaroline SeawrightJune 25, 2002 Updated: December 3, 2012. The Ancient Egyptian Gods. During the pre-dynastic period (from around 4000 BC to 3300 BC), animals were used as mascots to symbolize each district in the South and North. The Egyptian Heaven and Hell: Seventh Division of the Tuat. I. Kingdom of Osiris According to the Book Am-Tuat. Sacred Texts Egypt EHH Index Index Previous Next. Temple of Nekhbet. Vulture Stele Translation. "" - Free Books & Children's Stories Online. Oneforces WordPress. Archangel Oracle ~ Divine Guidance. Egyptian Vulture Goddess Nekhbet on Pinterest. Egyptian Gods: Nekhbet. Egyptian Gods: Nekhbet. Stolen Legacy: Part II: Social Reformation through the New Philosophy of African Redemption.