The good daughter. Ten Myths and a Truth from the TEF: Reading the White Paper. Although the Higher Education and Research Bill is still going through parliamentary scrutiny, the Teaching Excellence Framework is about to be implemented and yet we do not know for certain what its effects will be, or even which institutions will enter into it. 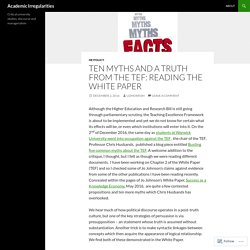 On the 2nd of December 2016, the same day as students at Warwick University went into occupation against the TEF , the chair of the TEF, Professor Chris Husbands, published a blog piece entitled Busting five common myths about the TEF. A welcome addition to the critique, I thought, but I felt as though we were reading different documents. Librarians in the 21st Century: It Is Becoming Impossible to Remain Neutral.

Library neutrality sounds innocuous, but it’s not, if you’re a librarian. 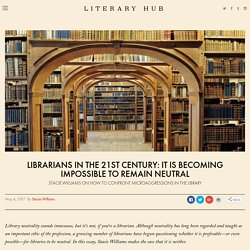 Although neutrality has long been regarded and taught as an important ethic of the profession, a growing number of librarians have begun questioning whether it is preferable—or even possible—for libraries to be neutral. In this essay, Stacie Williams makes the case that it is neither. –Stephanie Anderson I love working the reference desk. Like most people, it was my first introduction to librarians as a little kid: the smiling person behind a desk, asking me if I needed help finding anything. Stop Apologizing for the Delayed Response in Your Emails. “Adulthood is emailing ‘sorry for the delayed response!’ 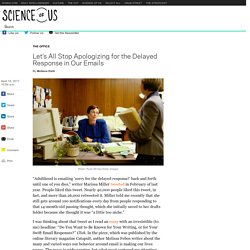 Back and forth until one of you dies,” writer Marissa Miller tweeted in February of last year. People liked this tweet. "What have they done to my library?" - Caitlin Moran's latest column. This Saturday’s Times featured a fantastic column from Caitlin Moran on the importance of libraries – not the first time she has written on the subject. 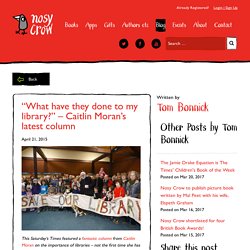 This piece is re-published here with Moran’s kind permission. I went up and saw some of the austerity last month. On the Milo Bus With the Lost Boys of America’s New Right. 4chan: The Skeleton Key to the Rise of Trump – Dale Beran – Medium. Letter from a Birmingham Jail [King, Jr.] 16 April 1963 My Dear Fellow Clergymen: While confined here in the Birmingham city jail, I came across your recent statement calling my present activities "unwise and untimely. 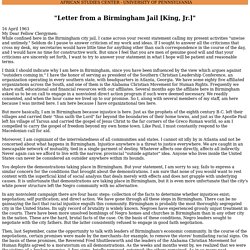 " Seldom do I pause to answer criticism of my work and ideas. If I sought to answer all the criticisms that cross my desk, my secretaries would have little time for anything other than such correspondence in the course of the day, and I would have no time for constructive work. But since I feel that you are men of genuine good will and that your criticisms are sincerely set forth, I want to try to answer your statement in what I hope will be patient and reasonable terms.

In Venezuela, we couldn’t stop Chávez. Don’t make the same mistakes we did. The Immigration Ban is a Headfake, and We’re Falling For It. Assuming this narrative is true (again, I have no idea what the administration intends), the “resistance” is playing right into Trump’s playbook. 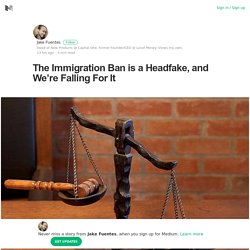 The most vocal politicians could be seen at rallies, close to the headlines. The protests themselves did exactly what they were intended to: dominate the news cycle and channel opposition anger towards a relatively insignificant piece of the puzzle. I’m not saying that green card holders should be stuck in airports — far from it. I’m saying there might be a much larger picture here, and the immigration ban is a distraction. So for those that believe that the power consolidation narrative is true and want to oppose it, how does that happen? » Blacklists are technically infeasible, practically unreliable and unethical. Period.

It’s been a big weekend for poorly designed blacklists. 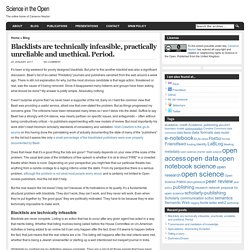 But prior to this another blacklist was also a significant discussion. Beall’s list of so-called “Predatory” journals and publishers vanished from the web around a week ago. There is still not explanation for why, but the most obvious candidate is that legal action, threatened or real, was the cause of it being removed. Since it disappeared many listservs and groups have been asking what should be done? My answer is pretty simple. Here are 23 terrifying things that President Trump has done in the last seven days. 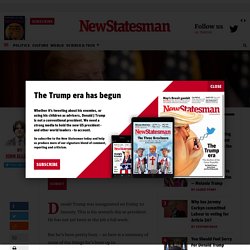 This is his seventh day as president. He has not yet been in the job a full week. But he’s been pretty busy – so here is a summary of some of the things he’s been up to. I should warn you upfront that this is quite a long list – but it seemed worth taking the time to record quite how many frightening or ridiculous things a government can do in a short time period when it really puts its mind to it. All I Know Is What’s on the Internet — Real Life. All I Know Is What’s on the Internet Information literacy is not the antidote to fake news, because the institutions for teaching it can’t be trusted either Rolin Moe January 17, 2017 share Image: "Lost in Reflection" from Night Shift by Guillaume Lachapelle. 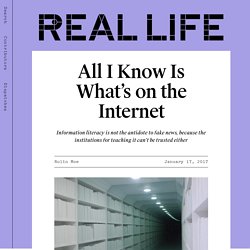 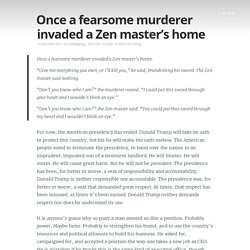 “Give me everything you own, or I’ll kill you,” he said, brandishing his sword. The Zen master said nothing. Sherlock And The Adventure Of The Declining Standards. Contains a memory palace full of spoilers It's great when you're the showrunner of a massively beloved TV show with legions of loyal fans. Because even with a schedule that requires three episodes every two years, you can basically do nothing for twenty-three months, and then toss out some scripts over a weekend Pro-Plus binge. It's fine, they'll watch anything, as long as you Do The Things.

Scientists aren't superheroes – failure is a valid result. Concern has been growing in the past decade about published scientific claims that other laboratories can’t successfully replicate. Some of these studies are pretty silly – for example, the claim that women’s political preferences change by 20 percentage points depending on the time of the month. Others were potentially useful but didn’t work out, like the one which says that holding your body in a “power pose” gives you a hormonal boost.

Then there are claims which may have policy relevance, such as the study that says early childhood interventions could increase young adults’ earnings by 40%. The claim came from a longitudinal study which would require at least 20 years to replicate, but, on the basis of statistics alone, we have good reason to be sceptical about the findings. This replication problem has become a crisis in the sense that researchers, ordinary citizens and policymakers no longer know what or whom to trust. Post-truth and information literacy. CC0, Public Domain So there’s this phrase being bandied about: “post-truth.”

As in, we live in a “post-truth era.” Popular use of the phrase is over a decade old, but its recent ascendancy lead The Oxford English Dictionary to name it Word of the Year for 2016; here’s the OED definition: relating to or denoting circumstances in which objective facts are less influential in shaping public opinion than appeals to emotion and personal belief. I mean, we’re at the point where Trump supporters racists are literally saying that “there’s no such thing, unfortunately, anymore of facts.” Armchair political scientists and ersatz media commentators are having a field day using post-truth politics to explain everything from contemporary political discourse to Brexit to identity politics to the rise of neo-Nazism to the presidential election and everything in between.

V for Volunteer – a dystopian reality. Parents Of Nasal Learners Demand Odor-Based Curriculum. COLUMBUS, OH–Backed by olfactory-education experts, parents of nasal learners are demanding that U.S. public schools provide odor-based curricula for their academically struggling children. Teaching ‘grit’ is bad for children, and bad for democracy. According to the grit narrative, children in the United States are lazy, entitled and unprepared to compete in the global economy. Schools have contributed to the problem by neglecting socio-emotional skills. The solution, then, is for schools to impart the dispositions that enable American children to succeed in college and careers.

You can subscribe in iTunes, to get past and future episodes. It’s near midnight on a Friday at Kansas State University, and an associate professor of anthropology is out with his students, sneaking onto the rooftop of a campus building — or at least trying to. Not Enough Voices - Hybrid Pedagogy. We Can Handle the Truth. The Society of Professional Journalists Code of Ethics starts out with a bang: Seek truth and report it. I’ve Got a Serious Problem with “Serious Academics.” – The Tattooed Professor. Trying to make it in the non academic world… I’m With The Banned — Welcome to the Scream Room. The car pulls up outside a dinner being held by Fox News, and two giant, besuited security guards get in on either side of me. They are the single most massive individuals I have ever met. Paulo Freire, critical pedagogy, and libraries. Katyboo1's Weblog. Would Europeans be free to stay in the UK after Brexit?

The digital skills crisis - infoism. Libraries, books, and librarians. Who is the woman in the first world problems meme image? - Quora. Technigal. Accessing Publisher Resources via a Mobile Device: A User’s Journey. What’s the point of education if Google can tell us anything? Welcome to 'the worst job in the world' – my life as a Guardian moderator. Poor writing advice. Meditation for Beginners: 20 Practical Tips for Understanding the Mind.

Quote by Umberto Eco: “Books are not made to be believed, but to be su...” Beyond the Bullet Points: Bad Libraries Build Collections, Good Libraries Build Services, Great Libraries Build Communities. The Materiality of Research: ‘On the Materiality of Writing in Academia or Remembering Where I Put My Thoughts’ by Ninna Meier. Critiquing Scholarly Positions. 24 books you've probably never heard of that will change your life. Librarians Find Themselves Caught Between Journal Pirates and Publishers.

How to Use a Bullet Journal to Stay Organized! — Plant Based Bride. Researcher illegally shares millions of science papers free online to spread knowledge. Q: What did universities learn from the financial crash? A: Nothing. Information literacy is for life, not just for a good degree. The Answers, The Questions and Practical Significance — Identity, Education and Power. Concrete ways faculty can work with other colleagues to improve their teaching (essay) Just because you can’t see it, doesn’t mean it’s not real. In the library in the gym, Big Brother is coming to universities.

There's something better than a 'fuck off fund'