Analyzing the connections between friends and followers 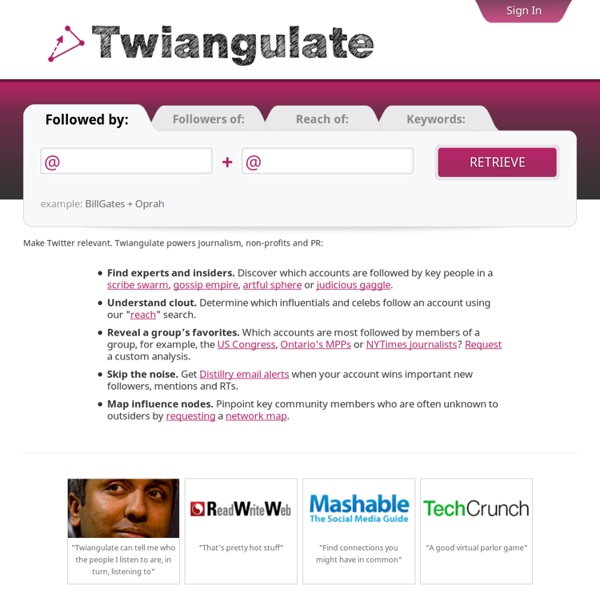 Chicago Lobbyists Force-Directed Graph Visualization Created by Christopher Manning Summary This visualization includes the 50 highest paid lobbyists in Chicago, their clients, and the agencies they lobby. The data was compiled from ChicagoLobbyists.org in 2010. Blue Nodes: LobbyistsGrey Nodes: ClientsGreen Nodes: Agencies Search Twitter users by Location and Bio and Create Twitter Lists: LocaFollow Search and filter options allowing you to find people to follow depending on location, influence, number of followers, how active users are on Twitter and many more! Find the most beneficial people to target so that you can grow and increase the quality of your Twitter community. Find out your best time to tweet, discover the interests of a custom sample of users and endless extra features!

Trailmeme creates retraceable, social Web history SANTA CLARA, Calif.--When it comes to bookmarks, most browsers use the same system for organization: folders and tags. A new Xerox-incubated company called Trailmeme is taking a different approach by putting Web pages in a nested hierarchy that can show how they're related. The goal is to create a browsing experience with context, and one that can be shared with others. Trailmeme, which launches as part of the Demo conference taking place here this week, is not a replacement for your browser's bookmarking system though. It's more of a tool for creating self-guided trips of Web sites.

Interactive: Mapping the World's Friendships Technology bridges distance and borders. Individuals today can keep in touch with their friends and family in completely new ways — regardless of where they live. We explored these international connections through Facebook and found some trends — some predictable, some wholly unexpected, and some still inexplicable. Who can explain the strong link between the Democratic Republic of Congo, one of the poorest countries in the heart of Africa, and Ecuador? The reason the Central African Republic might be good friends with Kazakhstan is likewise mysterious to us. Sign Up Twitter spam is a drag. What if you could know for sure that your followers are truly human, and not some bot? TrueTwit is designed to help you: Verify people from robots Avoid Twitter spam Save time managing your followers There are two versions: TrueTwit Premium TrueTwit Premium builds on the follower management in TrueTwit Basic by doing an in-depth, automated analysis of your followers and their tweets, and has the following features: No direct messaging of new followers. Access to our Follower Analysis page which summarizes the status of your followers.

RelFinder - Visual Data Web Are you interested in how things are related with each other? The RelFinder helps to get an overview: It extracts and visualizes relationships between given objects in RDF data and makes these relationships interactively explorable. Highlighting and filtering features support visual analysis both on a global and detailed level. The RelFinder is based on the open source framework Adobe Flex, easy-to-use and works with any RDF dataset that provides standardized SPARQL access. Check out the following links for some examples: How To Backup Your Twitter Archive With the Twitter fail whale popping up all the time, you never know when something tragic might happen. No one want to lose all of their Twitter tweets, followers, or anything else for that matter. That’s why it’s a good idea to backup your Twitter archive on a regular basis in case of a Twitter mishap. As we all know, there has been numerous times in the past where users have lost followers, tweets, and DMs. Fortunately, you can make sure this doesn’t happen to you by using one of the following methods to backup your Twitter archive. Tweetake

15 Free Tools for Web-based Collaboration No man (or woman) is an island – and this statement can’t be any truer if you’re a designer or developer. Though paid/subscription services like Basecamp and Zimbra are great, individuals strapped for cash have a ton of alternatives that provide similar (if not better) features. In this article, you’ll find 15 free tools to help you facilitate remote/web-based collaboration. Whether you need basic whiteboarding/brainstorming tools or fully-featured project management applications – you should be able to find a tool or two that’s worth checking out. Google Docs

NameBase NameBase is a web-based cross-indexed database of names that focuses on individuals involved in the international intelligence community, U.S. foreign policy, crime, and business. The focus is on the post-World War II era and on left of center, conspiracy theory, and espionage activities.[1] In the 1980s, through his company Micro Associates, he sold subscriptions to this computerized database, under its original name, Public Information Research, Inc (PIR). At PIR's onset, Brandt was President of the newly formed non-profit corporation and investigative researcher, Peggy Adler, served as its Vice President.

10 Top Twitter Tools Suggested By the Pros Yes, there are a ton of great Twitter Tools out there for you, but which ones should you pick? I thought one of the best ways to narrow your choice down is to get in touch with the real Social Media experts. I sent them an email and asked them about their recommended Tools for you. So here are the top 10 responses from the Twitter Pros out there.

The Hidden Guide to Using Twitter Effectively When it comes to social media, there is not that much hidden about how it all works. The issue is that sometimes the information is hard to find in one place. So in this post, we are going to unearth some commonly unanswered questions in standard Twitter how to posts when it comes to getting the most out of your Twitter experience. What is the New Twitter Activity Stream? You may not have noticed it yet because you spend a lot of time in a Twitter management tool instead of on Twitter itself. 30 Creative QR code business cards There is a lot of buzz around QR codes at the moment, so we thought we would take a look at some of the most creative and stunning QR code business cards on the web. We love QR codes as they connect offline and online while challenging traditional design at the same time. First of all, in case you have been living under a rock, let’s answer the obvious question. What the hell is a QR code?! A quick response (QR) code is a two dimensional code that can be scanned and read by smartphone cameras to transfer information. The information can then be encoded to text, add a vCard contact, open a URL or much more.