Be an outstanding educator

These collections and sites are for fellow educators who enjoy the challenge of developing themselves and keeping up-to-date with the latest trends in education.

Know what your students need and want

Can a Truly Student-Centered Education Be Available to All? Unschooling is a hotly debated topic on MindShift. 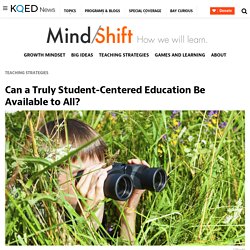 This subset of home schooling, which doesn’t use any set curriculum and is instead directed by the child’s interests, is vastly different from traditional public and private schools. While the freedom inherent in the model excites some readers, others question whether young people educated this way will learn the important information and skills they need to become productive adults in our society. How Can We Harness the Power of Learning Beyond the School Day? Discussions of learning tend to focus on what happens in schools, but many students are learning lots of important skills outside of school through extracurriculars like sports, music, art, politics or any other passion. 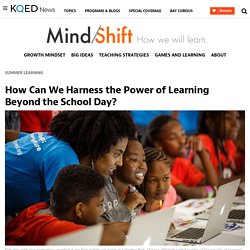 Often students don’t get recognition for the learning they pursue on their own, and many times they don’t even see their passion as learning at all. The Chicago City of Learning project is trying to meet that need by helping connect youth to resources that support their interests and provide validation for the hard work that goes into learning outside the academic setting.

Harnessing the Incredible Learning Potential of the Adolescent Brain. Research-based Strategies to Help Children Develop Self-Control. Mischel agrees that the importance of a trusting relationship between the adult and child is often overlooked in reporting about his research. 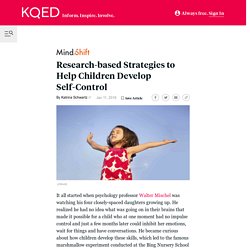 He began studying that aspect at the very beginning of this work. “To even want to delay gratification requires a trust expectation that’s often not there for kids for whom self-control and delayed gratification is most difficult,” Mischel said. For children whose worlds are unstable and unpredictable, the marshmallow test may be testing belief in authority as much as self-control. But aside from the specifics of the marshmallow test, lots of research has shown the value of self-control to positive life outcomes.

That’s why Mischel is trying to focus the conversation on strategies educators and parents can use to help kids build self-control. Education Research Highlights From 2015. 2015 was a great year for education research. fMRI technology gave us new insight into how exercise can improve math ability by changing the structure of children's brains (#13 below). 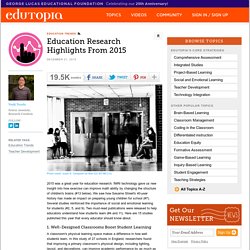 What Do Students Think Of Your Class? Bring TeachThought Professional Development to your School! 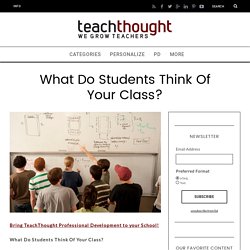 What Do Students Think Of Your Class? By Terry Heick Google is the company that has become its own verb. Google it. They’re also challenging Apple with their Android mobile operating system (though to be fair, they’re unlikely to catch them anytime soon), not to mention their aggressive entry into new digital markets, from Google Fiber to the Chromebook. They make more money than they could ever spend, and can seemingly do what they please from their Mountain View, California headquarters, where billion dollar patent lawsuits barely cause a ripple. Who Controls The Flow Of Information In Your Classroom? - Who Controls The Flow Of Information In Your Classroom? 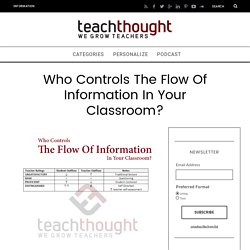 Flow As A Litmus Test For Quality Teaching. Fixated on Leadership: Why Learning How to Follow is Crucial for Success. Leadership ability, it would seem, is the essential ingredient of success. 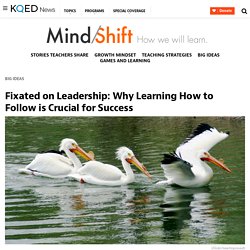 But is it? Academies and institutes, high schools and colleges, MBA programs and charter schools all promote their ability to train 21st century leaders. High school seniors applying for college using the Common Application are instructed to include details about the “position/leadership” they hold as a part of their extracurricular activities. The celebration of leadership has become so routine that an educator at a California preschool was heard prompting a 5-year-old to “use her leadership voice.” “The term has become so ubiquitous that it has lost its meaning,” said Ira Chaleff. 10 Ways to Teach Innovation. Getty By Thom Markham One overriding challenge is now coming to the fore in public consciousness: We need to reinvent just about everything. 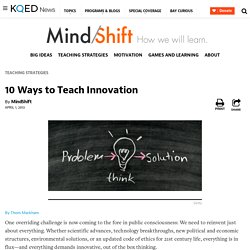 Whether scientific advances, technology breakthroughs, new political and economic structures, environmental solutions, or an updated code of ethics for 21st century life, everything is in flux—and everything demands innovative, out of the box thinking. At the Movies: Films Focused on Education Reform. Beyond Measure (2015)Beyond Measure follows three different sets of teachers and students as they grapple with the realities of public education and try to enact meaningful change in their own education communities. 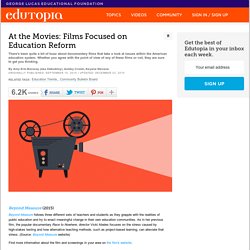 As in her previous film, the popular documentary Race to Nowhere, director Vicki Abeles focuses on the stress caused by high-stakes testing and how alternative teaching methods, such as project-based learning, can alleviate that stress. (Source: Beyond Measure website)Find more information about the film and screenings in your area on the film's website. Previously Featured Films Most Likely to Succeed (2015) Dissatisfied with his daughter’s schooling, director Greg Whitely documented his exploration of alternatives in this documentary about the project-based learning approach at High Tech High, a charter school in San Diego, California. The Road to Teach (2015) The Address (2014) Finding the Gold Within (2014) The Homestretch (2014) Rich Hill (2014) The Rule (2014) Listen (2013) What Is Genius Hour? - What Is Genius Hour? 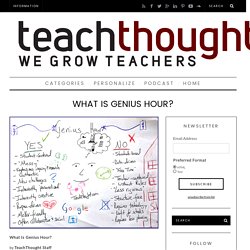 By TeachThought Staff Genius hour is an approach to learning where students are guided by their own interests, background knowledge, and curiosity to learn. From the outside looking in, it is less organized, less formal, and less standardized than traditional learning. The RSA on YouTube. The Difference Between Pedagogy, Andragogy, And Heutagogy. The Difference Between Pedagogy, Andragogy, And Heutagogy by Terry Heick Jackie Gerstein’s passionate thinking about learning is some of my favorite to read. She is rarely pulled down by trend or fad, but is unquestionably progressive and forward-thinking in her approaches to learning and thinking about learning.

She and I also share a passion: self-directed learning. (As does the original summarizer/author of the thinking embedded in table above, Lindy McKeown Orwin.) I’m embarrassingly interested in any kind of learning at all–formal or informal, self-directed or teacher-centered, authentic or academic. 197 Educational YouTube Channels You Should Know About. 197 Educational YouTube Channels You Should Know About If you don’t have a YouTube channel as an education provider, there’s a good chance you’re behind the times. Nearly every major educational institution in the world now hosts its own collection of videos featuring news, lectures, tutorials, and open courseware.

Just as many individuals have their own channel, curating their expertise in a series of broadcasted lessons. These channels allow instructors to share information and blend media in unprecedented and exciting new ways. From teaching Mandarin Chinese to busting myths about Astronomy, the educational possibilities are virtually endless pun intended! Because we can now sift through thousands of resources while navigating a single repository, the potential for inspiration and growth in the field of education has reached a new height. Here are the top channels worth following based on views, subscriptions, and quality of content: General Physical Sciences Engineering & Technology Mr. Don't forget, the science of memory is key to helping students learn.