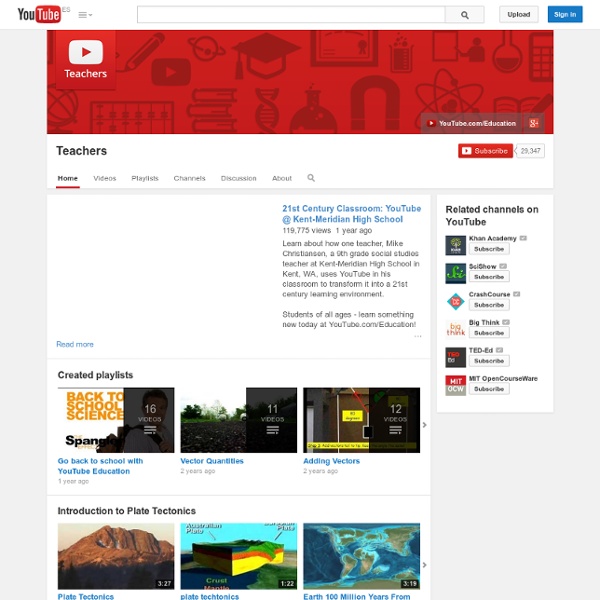 Learn about how one teacher, Mike Christiansen, a 9th grade social studies teacher at Kent-Meridian High School in Kent, WA, uses YouTube in his classroom to transform it into a 21st century learning environment. Students of all ages - learn something new today at YouTube.com/Education! Teachers: Learn how to incorporate YouTube in your classroom at YouTube.com/Teachers.Administrators: Sign up to bring YouTube into your school at YouTube.com/Schools. Show less

9 YouTube Features You Probably Haven't Heard of Everyone knows about YouTube. With hours and hours of video footage uploaded every couple of minutes, there’s no question that it’s one of the biggest websites on the entire Internet. There’s so much content on YouTube that no matter who you are, you’ll find something that meets your taste. There’s something up there for just about everyone. Teaching with Evernote: A 6th and 8th Grade Science Teacher Shares His Top Tips (Back-to-School Series) Posted by Kevin Buran on 30 Aug 2011 Comment Bio Kevin Buran teaches 6th and 8th grade science to students at Carmel Middle School. 100 Ways To Use Google Drive In The Classroom 100 Ways To Use Google Drive In The Classroom by onlineuniversities.com Students and educators have a wealth of learning and productivity tools available to them online. Google offers some of the highest-quality resources on the web to meet all your study and teaching needs, and all you need to access them is an internet connection. The Google Docs collection provides a streamlined, collaborative solution to writing papers, organizing presentations and putting together spreadsheets and reports.

Opening up a world of educational content with YouTube for Schools When I was in school during the 90s, watching videos in the classroom was a highlight of any week. The teacher would roll in a television on a cart, pop in a VHS tape, and then we’d enjoy whatever scratchy science video my teacher had checked out from the school video library that week. Sight, sound and motion have always had the power to engage students and complement classroom instruction by bringing educational topics to life. Mount Olympus In Greek mythology, Mount Olympus was the dwelling of the Olympian Gods and it was created after the Titanomachy, the battle during which the Olympians defeated their predecessors, the Titans. The peak Mytikas was then called Pantheon and was the venue where all the fiery discussions among the deities took place. There was also a place where the Throne of Zeus was located. The twelve Olympians that resided at Mount Olympus were Zeus, Hera, Poseidon, Athena, Apollo, Artemis, Hestia, Demeter, Hermes, Aphrodite, Ares and Hephaestus. Apart from the gods, the foot of the mountain was also the place where the nine Muses lived.

Make Your Own Movie With YouTube Video Editor YouTube is the most popular site for viewing videos of all types and with 8 years of content added to the site everyday, there’s always something new and exciting to check out. That’s because YouTube makes it easy to make your own video, then promote it and track it. Regardless if you’re using it for business or pleasure, all of these options help you to create content that appeals to your audience, which gets your content shared and viewed by more people. Push, don't pull your eLearners - removing barriers to learning In the context of eLearning, to me, this is a 'no-brainer' and I find it alarming, disappointing, and depressing, how often people don't get it. I think the same holds true in eLearning. If barriers to using eLearning tools are put up then educators and students won't use the tools, and this sets up a feedback loop.

ly Attention Mural-ers: We have good news. After many requests for a drawing feature, we’re happy to announce that Mural.ly now allows you to sketch your ideas out on sticky notes (and we’re pretty excited about it). Sketching out your ideas is good for lots of reasons. To name a few: Here's How Twitter Can Track You on All of Your Devices Facebook gets all the bad press, but the bigger threat to your online privacy these days might be your Twitter account. Twitter knows you much better than you may realize. And as it prepares for an IPO, it's taking steps that may allow it to profit from your data in ways that would provoke howls of protest were Mark Zuckerberg to try the same. Mount Olympus Olympus' highest peak, Mytikas Every year thousands of people visit Olympus to admire its nature, to tour its slopes, and reach its peaks. Organized mountain refuges and various mountaineering and climbing routes are available to visitors, who want to explore its nature. The usual starting point for it is the town of Litochoro, on the eastern foothills of the mountain, 100 km from Thessaloniki, where, in the beginning of every summer, the Mountain Olympus Marathon terminates.