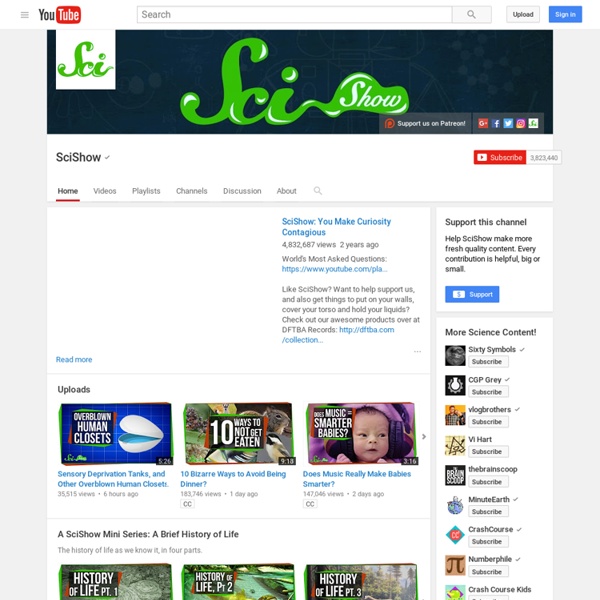 SmarterEveryDay Twitter SmarterEveryDay Loading... Working... The Backwards Brain Bicycle - Smarter Every Day 133 14,875,581 views 1 year ago Get your own here ⇒ Shirt: Support Link: ⇒ ⇐ ↓↓↓↓↓↓↓READ MORE: ↓↓↓↓↓↓↓Here's the link from the Amsterdam meetup! (I usually make a localized facebook post before I visit a city to see if anyone wants to high five.) threads on Reddit: (Bicycling)My Instagram account: Support Link: Motion Sound Design by "A Shell In The Pit"The awesome music by "A Shell In The Pit" is called:"Bottles" which can be downloaded here. AsapSCIENCE Follow us @mitchellmoffit & @whalewatchmeplziTunes ( Bandcamp ( It's free: Get the AsapSCIENCE book! Check out our second channel: LINKS TO FOLLOW USInstagram - Greg ( Mitch ( - Greg ( Mitch ( - Greg (whalewatchmeplz) Mitch (pixelmitch)

Down The Rabbit Hole We Go! 300+ Mind Expanding Documentaries I watch a lot of documentaries. I think they are incredible tools for learning and increasing our awareness of important issues. The power of an interesting documentary is that it can open our minds to new possibilities and deepen our understanding of the world. On this list of mind expanding documentaries you will find different viewpoints, controversial opinions and even contradictory ideas. Critical thinking is recommended. I’m not a big fan of conspiracy documentaries but I do like films that challenge consensus reality and provoke us to question the everyday ideas, opinions and practices we usually take for granted.

Minuscule 663 Diabetic ketoacidosis (DKA) is a potentially life-threatening complication in people with diabetes mellitus. It happens predominantly in those with type 1 diabetes, but it can occur in those with type 2 diabetes under certain circumstances. DKA results from a shortage of insulin; in response the body switches to burning fatty acids and producing acidic ketone bodies that cause most of the symptoms and complications.[1] DKA may be the first symptom of previously undiagnosed diabetes, but it may also occur in people known to have diabetes as a result of a variety of causes, such as intercurrent illness or poor compliance with insulin therapy. Vomiting, dehydration, deep gasping breathing, confusion and occasionally coma are typical symptoms. DKA is diagnosed with blood and urine tests; it is distinguished from other, rarer forms of ketoacidosis by the presence of high blood sugar levels.

TEDx Talks Musician Scott Mescudi, aka Kid Cudi, returns to his high school to talk about growing up and his career path in the music industry. Born Scott Ramon Seguro Mescudi in Cleveland, Kid Cudi began rapping while attending Shaker Heights High School and later Solon High School. In 2004, Kid Cudi moved to Brooklyn, NY to pursue his rap career. He released his first mixtape, “A Kid Named Cudi,” in 2008. The mixtape earned Kanye West’s attention, leading him to sign Cudi to his GOOD Music imprint. The Story of Mankind Van Loon, Hendrik . The Story of Mankind Electronic Text Center, University of Virginia Library | The entire work ( KB) | Table of Contents for this work | | All on-line databases | Etext Center Homepage |

Sequences A sequence is a series of multiple posts on Less Wrong on the same topic, to coherently and fully explore a particular thesis. Reading the sequences is the most systematic way to approach the Less Wrong archives. If you'd like an abridged index of the sequences, try XiXiDu's guide, or Academian's guide targeted at people who already have a science background. Khan Academy Overview of cultural contributions of Classical Greece. Golden Age of Athens. Age of Pericles. Watch the next lesson:

Parenting/Popular Culture: Media’s Externalization of Your Children’s Self-identity - Dr. Jim Taylor “To all of Chris’ friends: This is his father. My son carelessly left his account logged in so I decided to snoop around. Upon reading my son’s personal information, I would like to clear a few things up. My son is not a ‘gangsta,’ he will not ‘beat a ho’s ass’ and he will most certainly not ‘roll a fatty wit his boyz.’ So for all of those who think he is some hard ass thug, think again…he is Chris _______, a 15 year old kid that was afraid of the dark until he was 12 and cried at the end of Marley and Me.”