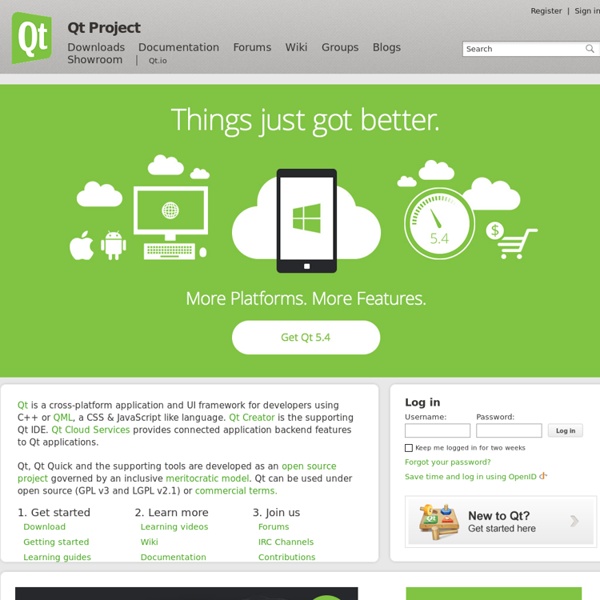 tiny osc library The story OscPkt is a very minimalistic OSC library. What I wanted to achieve with this lib: Getting Started with Java IDL Java™ IDL is a technology for distributed objects – that is, objects interacting on different platforms across a network. Java IDL enables objects to interact regardless of whether they're written in the Java programming language or another language such as C, C++, COBOL, or others. This is possible because Java IDL is based on the Common Object Request Brokerage Architecture (CORBA), an industry-standard distributed object model. A key feature of CORBA is IDL, a language-neutral Interface Definition Language. Firefox OS: applications 101 Hi again! The other day in TID I was told there is not much information about how to start a HTML5 application for Firefox OS and deploy it into the device. There is. Seriously.

libconfig - C/C++ Configuration File Library If you find this software useful, please consider making a donation in the amount of your choice. At the very least, such donations can go toward paying for the hosting of this website. Overview Libconfig is a simple library for processing structured configuration files, like this one: test.cfg. This file format is more compact and more readable than XML. And unlike XML, it is type-aware, so it is not necessary to do string parsing in application code. An Introduction to Programming with JacORB Gerald Brose Institut für Informatik Freie Universität Berlin, Germany brose@inf.fu-berlin.de This document gives an introduction to programming distributed applications with JacORB, a free Java object request broker. It is structured as follows. First, we briefly describe how to obtain and install JacORB.

SFML Tutorial: Basic Game Engine Creating a Basic Game Engine At the core of every good game is a game engine. But as a beginner, building your first game engine can be pretty daunting. There are lots of things to consider when designing a solid game engine. Managing all the graphics, sounds, music, and game objects takes a lot of effort and is not as fun as designing what the game will actually do. Most people interested in game programming start with a game idea and don't know where to start in bringing their game idea into reality. IDL Tutorial This HTML document was generated using the MS-Word 97 HTML converter and may contain strange text alignment and other problems. The Word version of this document is better for printing. The purpose of this tutorial is to introduce you to the IDL programming language, and to present you with sufficient tools to complete your first homework assignment.

Meet UDOO: the Android/Linux Arduino mini PC Whilst Android has become a standard platform on most mobile devices, it has still yet to really integrate itself within the computing world. However, this could be all set to change thanks to a new computer system which looks to help bring the operating system to a whole new audience and platform. The UDOO is an Arduino-based computer system that has been formatted to run on several platforms such as Android and Linux. With the device running a Freescale.i.MX6 ARM Cortex A9 processor, it means that developers can run the Ice Cream 4.0 version of Android much like it would on a smartphone or tablet.

Solarized - Ethan Schoonover Precision colors for machines and people Solarized is a sixteen color palette (eight monotones, eight accent colors) designed for use with terminal and gui applications. It has several unique properties. I designed this colorscheme with both precise CIELAB lightness relationships and a refined set of hues based on fixed color wheel relationships.