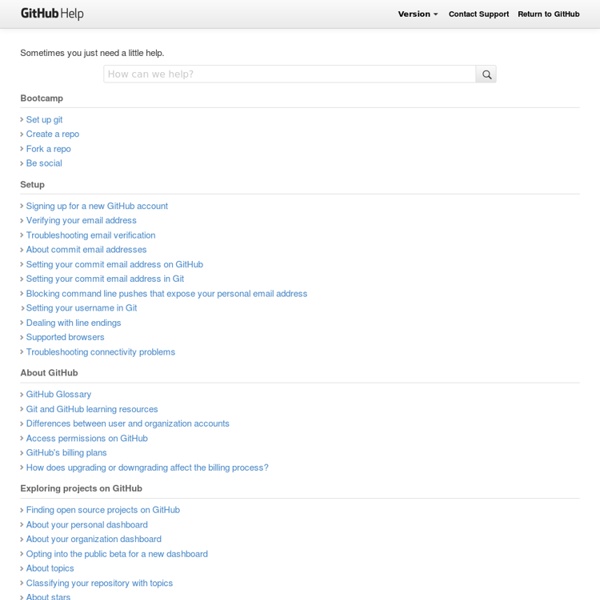 Getting started with Git In the introduction to this series we learned who should use Git, and what it is for. Today we will learn how to clone public Git repositories, and how to extract individual files without cloning the whole works. Since Git is so popular, it makes life a lot easier if you're at least familiar with it at a basic level. If you can grasp the basics (and you can, I promise!) So let's get comfortable with Git. Read and write Broadly speaking, there are two ways to interact with a Git repository: you can read from it, or you can write to it. In this article, we'll cover reading from a Git repository. Git or GitHub? A word of clarification: Git is not the same as GitHub (or GitLab, or Bitbucket). $ git usage: Git [--version] [--help] [-C <path>] [-p | --paginate | --no-pager] [--bare] [--Git-dir=<path>] <command> [<args>] As Git is open source, lots of smart people have built infrastructures around it which, in themselves, have become very popular. Installing Git Afternoon tea with Git And that's OK.

R Reference Card AT&T Labs Research - Yoix What is Yoix...? The Yoix scripting language is a general-purpose programming language that uses syntax and functions familiar to users of C and Java. It is not an object oriented language, but makes use of over 150 object types that provide access to most of the standard Java classes. Because the Yoix interpreter is built entirely using pure JavaTM technology, it means that Yoix applications are cross-platform, GUI-capable and both network and thread friendly, yet Yoix developers find themselves insulated from the more cumbersome and tricky parts of coding the same functionality directly in Java. Pointers? When people hear that the Yoix language includes pointers, their first reaction is usually a knee-jerk revulsion. An interpreted language written in Java? By the way, how do you pronounce Yoix? Yoix is pronounced like the English word "yoicks", whose pronunciation is given in the dictionary as "yoiks".

Git Workflows and Tutorials The array of possible workflows can make it hard to know where to begin when implementing Git in the workplace. This page provides a starting point by surveying the most common Git workflows for enterprise teams. As you read through, remember that these workflows are designed to be guidelines rather than concrete rules. We want to show you what’s possible, so you can mix and match aspects from different workflows to suit your individual needs. Centralized Workflow Transitioning to a distributed version control system may seem like a daunting task, but you don’t have to change your existing workflow to take advantage of Git. However, using Git to power your development workflow presents a few advantages over SVN. Second, it gives you access to Git’s robust branching and merging model. How It Works Like Subversion, the Centralized Workflow uses a central repository to serve as the single point-of-entry for all changes to the project. Developers start by cloning the central repository.

Learning R Qt Project msysgit Wiki curriculum/resources/git-basics-INTERACTIVE at master · dev-academy-programme/curriculum Summer 2010 — R: ggplot2 Intro Contents Intro When it comes to producing graphics in R, there are basically three options for your average user. base graphics I've written up a pretty comprehensive description for use of base graphics here, and don't intend to extend beyond that. Base graphics are attractive, and flexible, but when it comes to creating more complex plots, like this one, the code to create it become more cumbersome. Both and make creating plots of multivariate data easier. The website for ggplot2 is here: Basics is meant to be an implementation of the Grammar of Graphics, hence gg-plot. Plots convey information through various aspects of their aesthetics. x position y position size of elements shape of elements color of elements The elements in a plot are geometric shapes, like points lines line segments bars text Some of these geometries have their own particular aesthetics. The values represented in the plot are the product of various statistics. Layer by Layer

Git Moving Files from one Git Repository to Another, Preserving History | Greg Bayer inShare If you use multiple git repositories, it’s only a matter of time until you’ll want to refactor some files from one project to another. Today at Pulse we reached the point where it was time to split up a very large repository that was starting to be used for too many different sub-projects. After reading some suggested approaches, I spent more time than I would have liked fighting with Git to actually make it happen. In the hopes of helping someone else avoid the same trouble, here’s the solution that ended up working best. The solution is primarily based on ebneter’s excellent question on Stack Overflow. Another solution is Linus Torvald’s “The coolest merge, EVER! Move directory 1 from Git repository A to Git repository B. Git repository A contains other directories that we don’t want to move.We’d like to perserve the Git commit history for the directory we are moving. Make a copy of repository A so you can mess with it without worrying about mistakes too much.