Why The U.S. Has The Worst Public Transit System. Arizona Drug Tested Welfare Recipients — Here Are the Shocking Results. When Wisconsin Gov. 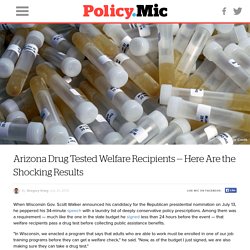 Scott Walker announced his candidacy for the Republican presidential nomination on July 13, he peppered his 34-minute speech with a laundry list of deeply conservative policy prescriptions. Among them was a requirement — much like the one in the state budget he signed less than 24 hours before the event — that welfare recipients pass a drug test before collecting public assistance benefits. "In Wisconsin, we enacted a program that says that adults who are able to work must be enrolled in one of our job training programs before they can get a welfare check," he said. "Now, as of the budget I just signed, we are also making sure they can take a drug test. " The Republican romance with legislation meant to complicate the process of delivering aid to low-income residents or, as critics argue, defame and shame them, can be traced back to 2009. "We don't want people who are abusing drugs to be on welfare," GOP state Rep.

Frances Oldham Kelsey, FDA scientist who kept thalidomide off U.S. market, dies at 101. 'One of the largest human experiments in history' was conducted on the unsuspecting residents of San Francisco. MSN.com. Echoes of Selma - CNN.com. They never linked arms to sing "We Shall Overcome. 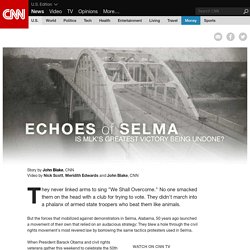 " No one smacked them on the head with a club for trying to vote. They didn't march into a phalanx of armed state troopers who beat them like animals. But the forces that mobilized against demonstrators in Selma, Alabama, 50 years ago launched a movement of their own that relied on an audacious strategy: They blew a hole through the civil rights movement's most revered law by borrowing the same tactics protesters used in Selma. Watch on CNN TV Watch live coverage of ceremonies in Selma commemorating 50 years since "Bloody Sunday" starting at 11 a.m. Earth - Your life on earth.

Explore BBC Earth's unique interactive, personalised just to you. Find out how, since the date of your birth, your life has progressed; including how many times your heart has beaten, and how far you have travelled through space. Investigate how the world around you has changed since you've been alive; from the amount the sea has risen, and the tectonic plates have moved, to the number of earthquakes and volcanoes that have erupted.

Grasp the impact we've had on the planet in your lifetime; from how much fuel and food we've used to the species we've discovered and endangered. Pentagon withheld information about decades-old chemical weapons during Iraq War, report claims. This photo shows the interior of a chemical weapons facility in Iraq (AP) American troops were exposed to chemical weapons multiple times in the years following the 2003 invasion of Iraq, while the Pentagon kept their discoveries of the expired or degraded weapons secret from investigators, fellow soldiers, and military doctors, according to a published report. 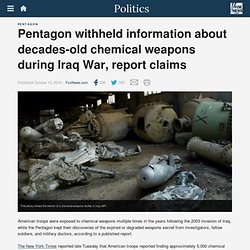 The New York Times reported late Tuesday that American troops reported finding approximately 5,000 chemical warheads, shells, or aviation bombs in the years following the 2003 invasion of Iraq. On at least six occasions, soldiers were wounded by those weapons, which had been manufactured before 1991. In all, the paper reported that 17 U.S. soldiers and seven Iraqi police officers were exposed to chemical agents during the war. The U.S. government said its number was slightly higher, but did not release a specific figure. This Week in Sociology: Unintended Consequences: The Social Context of 9/11. By Mike King, University of California, Santa Cruz, September 11, 2001 is a world historic moment, a historical signpost – “9/11”. 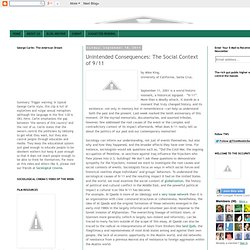 More than a deadly attack, it stands as a moment that truly changed history, and its existence--not only in memory but in remembrance—can help us understand both the past and the present. Last week marked the tenth anniversary of this moment. Of the myriad memorials, documentaries, and assorted tributes, however, few addressed the root causes of the event or the complex and contradictory context of its impact afterwards. What does 9/11 really tell us about the politics of our past and our contemporary memories?

Ancestry Project Resources. Corporate Accountability International. International Labor Rights Forum. Corporations carry out some of the most horrific human rights abuses of modern times, but it is increasingly difficult to hold them to account. 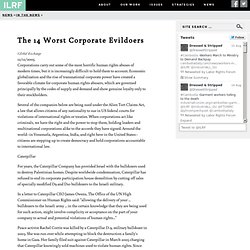 Economic globalization and the rise of transnational corporate power have created a favorable climate for corporate human rights abusers, which are governed principally by the codes of supply and demand and show genuine loyalty only to their stockholders. Several of the companies below are being sued under the Alien Tort Claims Act, a law that allows citizens of any nationality to sue in US federal courts for violations of international rights or treaties.

When corporations act like criminals, we have the right and the power to stop them, holding leaders and multinational corporations alike to the accords they have signed. Around the world--in Venezuela, Argentina, India, and right here in the United States--citizens are stepping up to create democracy and hold corporations accountable to international law. Caterpillar Chevron Coca-Cola. 100 Years Ago Today.