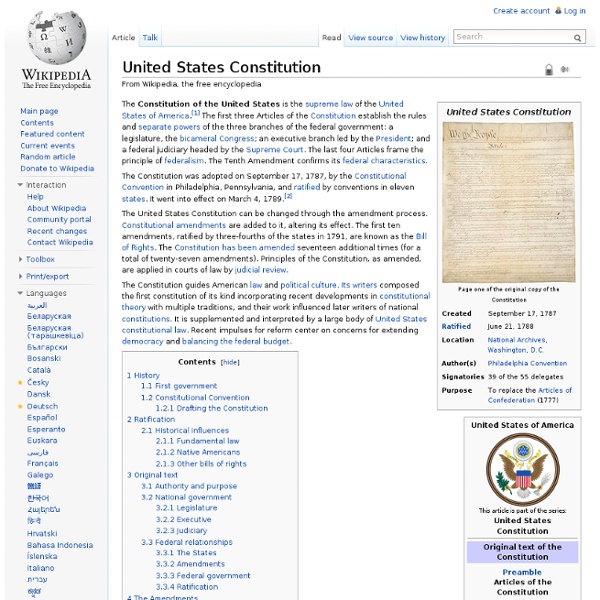 The Constitution was adopted on September 17, 1787, by the Constitutional Convention in Philadelphia, Pennsylvania, and ratified by conventions in eleven States. It went into effect on March 4, 1789.[2] Since the Constitution was adopted, it has been amended twenty-seven times. The first ten amendments (along with two others that were not ratified at the time) were proposed by Congress on September 25, 1789, and were ratified by the necessary three-fourths of the States on December 15, 1791.[3] These first ten amendments are known as the Bill of Rights. The Constitution is interpreted, supplemented, and implemented by a large body of constitutional law. History First government The Articles of Confederation and Perpetual Union was the first constitution of the United States of America.[6] It was drafted by the Continental Congress in mid-1776 to late 1777, and formal ratification by all 13 states was completed in early 1781. Congress was paralyzed. Constitutional Convention Ratification

Magna Carta Magna Carta was the first document forced onto a King of England by a group of his subjects, the feudal barons, in an attempt to limit his powers by law and protect their rights. The charter is widely known throughout the English speaking world as an important part of the protracted historical process that led to the rule of constitutional law in England and beyond. The 1215 charter required King John to proclaim certain liberties and accept that his will was not arbitrary—for example by explicitly accepting that no "freeman" (in the sense of non-serf) could be punished except through the law of the land, a right that still exists. The water-meadow at Runnymede is the most likely location at which, on 15 June 1215,[2] King John sealed the Magna Carta, and is the site of the Magna Carta Memorial. It was preceded and directly influenced by the Charter of Liberties in 1100, in which King Henry I had specified particular areas wherein his powers would be limited. Great Charter of 1215[edit]

Founding Fathers of the United States Terminology[edit] Within the large group known as the "Founding Fathers", there are two key subsets, those who signed the Declaration of Independence in 1776 and those who framed the Constitution in 1787. A further subset includes those who signed the Articles of Confederation.[1] Some historians define the "Founding Fathers" to mean a larger group, including not only the Signers and the Framers but also all those who, whether as politicians, jurists, statesmen, soldiers, diplomats, or ordinary citizens, took part in winning American independence and creating the United States of America.[2] Historian Richard B. Morris in 1973 identified the following seven figures as the key Founding Fathers: John Adams, Benjamin Franklin, Alexander Hamilton, John Jay, Thomas Jefferson, James Madison, and George Washington.[3] Three of these (Hamilton, Madison and Jay) were authors of the The Federalist Papers, advocating ratification of the Constitution. Background[edit] Political experience[edit]

Medieval History Lectures: Dr. Lynn H. Nelson Please take into consideration the purpose and audience for which the lecture notes listed above were written. For a good many years, I taught a three-credit-hour freshman survey entitled Introduction to Medieval History to enrollments of room-size - generally three hundred students. During those years, the University of Kansas maintained an open enrollment policy in which all graduates from accredited Kansas high schools were admitted to the University. Since the only history courses required by the State of Kansas at the secondary level were in American History, students enrolling for this course varied widely in their knowledge of the European past. Consequently, my lectures were both basic and episodic, concentrating on major events and topics that would prepare the students for further enrollments in Humanities courses and attempting to demonstrate that the study of History could be both useful and enjoyable.

Rights Rights are legal, social, or ethical principles of freedom or entitlement; that is, rights are the fundamental normative rules about what is allowed of people or owed to people, according to some legal system, social convention, or ethical theory.[1] Rights are of essential importance in such disciplines as law and ethics, especially theories of justice and deontology. Rights are often considered fundamental to civilization, being regarded as established pillars of society and culture,[2] and the history of social conflicts can be found in the history of each right and its development. According to the Stanford Encyclopedia of Philosophy, "rights structure the form of governments, the content of laws, and the shape of morality as it is currently perceived Definitional issues[edit] There is considerable disagreement about what is meant precisely by the term rights. One way to get an idea of the multiple understandings and senses of the term is to consider different ways it is used.

Executive Intelligence Review Seven virtues History[edit] The first virtues were identified by the Greek philosophers Aristotle and Plato, who regarded temperance, wisdom, justice, and courage as the four most desirable character traits. After the New Testament was written, these four virtues became known as the cardinal virtues, while faith, hope and charity were referred to as the theological virtues. Seven heavenly virtues[edit] A list of the seven heavenly virtues - to oppose the seven deadly sins - appeared later, in an epic poem entitled Psychomachia, or Battle/Contest of the Soul. Popular culture[edit] In White Wolf Game Studio's newer World of Darkness role-playing game, both the seven deadly sins and the seven heavenly virtues constitute required attributes of each player character in game mechanics. In the Paradox Interactive game, Crusader Kings II, various events and actions cause the player character to gain or lose one of the 7 virtues or vices. See also[edit] References[edit] External links[edit]

The World Factbook People from nearly every country share information with CIA, and new individuals contact us daily. If you have information you think might interest CIA due to our foreign intelligence collection mission, there are many ways to reach us. If you know of an imminent threat to a location inside the U.S., immediately contact your local law enforcement or FBI Field Office. In addition to the options below, individuals contact CIA in a variety of creative ways. If you feel it is safe, consider providing these details with your submission: Your full name Biographic details, such as a photograph of yourself, and a copy of the biographic page of your passport How you got the information you want to share with CIA How to contact you, including your home address and phone number We cannot guarantee a response to every message. Internet: Send a message here. Mail: Inside the U.S., send mail to the following address: Central Intelligence Agency Office of Public Affairs Washington, D.C. 20505