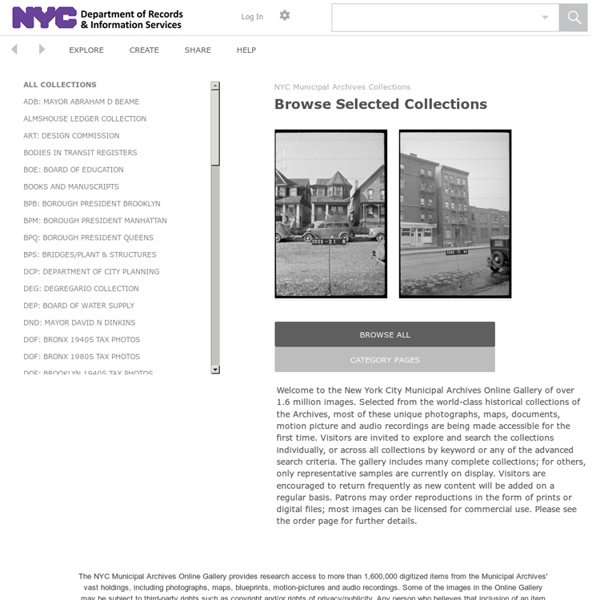 Welcome to the New York City Municipal Archives Online Gallery of over 900,000 images. Selected from the world-class historical collections of the Archives, most of these unique photographs, maps, motion picture and audio recordings are being made accessible for the first time. Visitors are invited to explore and search the collections individually, or across all collections by keyword or any of the advanced search criteria. The gallery includes many complete collections; for others, only representative samples are currently on display. Visitors are encouraged to return frequently as new content will be added on a regular basis. Patrons may order reproductions in the form of prints or digital files; most images can be licensed for commercial use.

Hurricane Sandy: After Landfall - In Focus Last night, Hurricane Sandy -- the largest Atlantic tropical system on record -- made landfall just south of Atlantic City, New Jersey, bringing winds up to 90 mph (150 kph), and pushing a massive storm surge onto beaches and shorelines. At least 12 deaths have been reported in the United States. These fatalities, when added to the previous toll in the Caribbean, leave Sandy responsible for more taking more than 80 lives to date. Millions across the Eastern Seaboard are now without power, and even more are struggling with rising floodwater.

1.8 Million Free Works of Art from World-Class Museums: A Meta List of Great Art Available Online Since the first stirrings of the internet, artists and curators have puzzled over what the fluidity of online space would do to the experience of viewing works of art. At a conference on the subject in 2001, Susan Hazan of the Israel Museum wondered whether there is “space for enchantment in a technological world?” She referred to Walter Benjamin’s ruminations on the “potentially liberating phenomenon” of technologically reproduced art, yet also noted that “what was forfeited in this process were the ‘aura’ and the authority of the object containing within it the values of cultural heritage and tradition.” Evaluating a number of online galleries of the time, Hazan found that “the speed with which we are able to access remote museums and pull them up side by side on the screen is alarmingly immediate.”

Virtual Tour - Statue Of Liberty National Monument Want to know what's going on inside the Statue of Liberty's head? The eTour will take you around the island and up to the crown. NPS Photo Whether you want to relive a previous visit to the Statue of Liberty, or you've never been to the park and want to get an idea of what it's like, a virtual tour is the way to go. You control your experience within the virtual tour, choosing from 360-degree panoramas, videos, pictures, and sounds.

Aerial Views of the Sandy Blackout The editor's letter in this week's New York Magazine tells the story of how the staff put the issue together after our downtown offices were flooded. Here is the story of how the striking photo on the cover of the issue came together. As we considered the different opportunities for imagery on Wednesday, it quickly became clear that one option was a picture of the island of Manhattan taken from the air, showing the clear delineation of lights on and off in different parts of the city. We called Iwan Baan, one of our contributing photographers, to see if he happened to be in New York at the moment. (He is based out of Amsterdam, but travels the world, and often stops by New York.)

Architectural Teaching Slide Collection The Block and Koenig slides are two of the smaller unique collections in the possession of the USC Libraries. They document examples of 20th century California architecture that developed stylistically from the foundations of the International Style as established by the 1932 exhibition at the Museum of Modern Art in New York, titled Modern Architecture: International Exhibition, and of European pre-World War II Modernism. The collection consists of about 1300 slides from the Fritz Block collection that document Modern architecture of Southern California (although there are some slides that pertain to Modern architecture of Northern California), and 100 slides from the collection of Pierre Koenig.

Moving the Movement: Analyzing the Future of Occupy Wall Street Overview | What is the current status of the Occupy Wall Street movement? What effects has it had so far, and where is it going from here? In this lesson, students react to current news, read an Opinion piece about its role in history, and do an analysis of the strengths and weaknesses of the movement to make predictions about its future. History Globe In 1606, some 105 adventurers set off from England to try and establish the first permanent English colony in the New World. They settled in what is now the state of Virginia and called their colony first James Fort, and then James Towne, in honor of James I, the King of England. The early years of the colony were nearly a total disaster. Almost half of the settlers died due to poor choices in settlement location, management of resources, and quarrels with the indigenous Powhatan Indians.

Royal wedding A simple line-up is no longer enough How did it become a bride's rite of passage? How much work goes into a couture frock? Securing a designer name at a bargain price Why there are three people in today's lavish weddings Comedian's tips for Prince Harry's speech How royal weddings have changed Why is it such a dilemma? What's the point of a gift list? Have men always worn them?