Eve and the Identity of Women: 7. Eve & Lilith 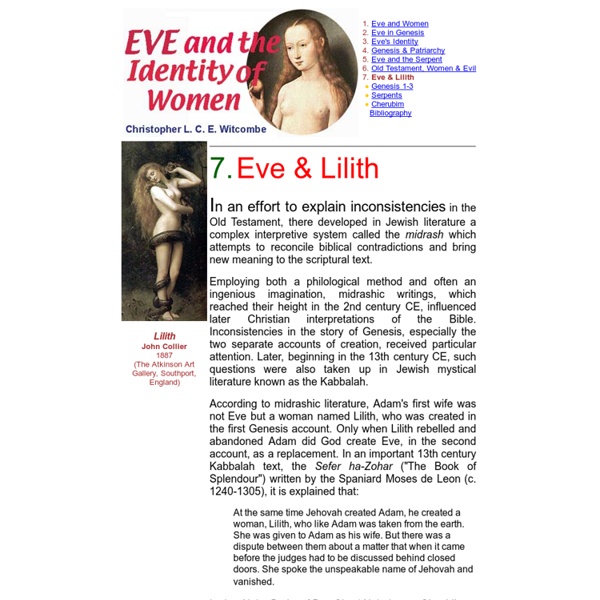 In an effort to explain inconsistencies in the Old Testament, there developed in Jewish literature a complex interpretive system called the midrash which attempts to reconcile biblical contradictions and bring new meaning to the scriptural text. Employing both a philological method and often an ingenious imagination, midrashic writings, which reached their height in the 2nd century CE, influenced later Christian interpretations of the Bible. Inconsistencies in the story of Genesis, especially the two separate accounts of creation, received particular attention. Later, beginning in the 13th century CE, such questions were also taken up in Jewish mystical literature known as the Kabbalah. According to midrashic literature, Adam's first wife was not Eve but a woman named Lilith, who was created in the first Genesis account. Only when Lilith rebelled and abandoned Adam did God create Eve, in the second account, as a replacement. Lilith also personified licentiousness and lust. Lilith?

Related:  Esotericism • Upon This Rock • whiteheartpoppy

Lilith Lilith (Hebrew: לילית‎; lilit, or lilith) is a Hebrew name for a figure in Jewish mythology, developed earliest in the Babylonian Talmud, who is generally thought to be in part derived from a class of female demons Līlīṯu in Mesopotamian texts of Assyria and Babylonia. Evidence in later Jewish materials is plentiful, but little information has been found relating to the original Akkadian and Babylonian view of these demons. The relevance of two sources previously used to connect the Jewish Lilith to an Akkadian Lilitu—the Gilgamesh appendix and the Arslan Tash amulets—are now both disputed by recent scholarship.[1] The two problematic sources are discussed below.[2] The Hebrew term Lilith or "Lilit" (translated as "Night creatures", "night monster", "night hag", or "screech owl") first occurs in Isaiah 34:14, either singular or plural according to variations in the earliest manuscripts, though in a list of animals. Etymology[edit] In Akkadian the terms lili and līlītu mean spirits.

Military technology: Laser weapons get real Lucasfilm/20th Century Fox/The Kobal Collection Silently, the drone aircraft glides above the arid terrain of New Mexico — until it suddenly pivots out of control and plummets to the ground. Then a mortar round rises from its launcher, arcs high and begins to descend towards its target — only to flare and explode in mid-flight. On the desert floor, on top of a big, sand-coloured truck, a cubic mechanism pivots and fires an invisible infrared beam to zap one target after another. This High Energy Laser Mobile Demonstrator (HEL MD) is a prototype laser weapon developed for the US Army by aerospace giant Boeing of Chicago, Illinois. Inside the truck, Boeing electrophysics engineer Stephanie Blount stares at the targets on her laptop's screen and directs the laser using a handheld game controller.

Lilith - semen demon or feminist icon? Exactly who or what is Lilith? Now regarded by Jewish esoteric tradition to be one of the four queens of demons, the nature of Lilith has undergone many reinterpretations throughout Jewish history. [Illustration: etching of Lilith on a metal amulet] Lilith - the Dark Moon See too: Other Points in the Horoscope In the beginning was the Great Goddess, and the Goddess was the Earth, and the Earth was the Goddess. The origins of the cult of the Great Goddess lie hidden in the dim twilight of prehistoric time. MSSQL Injection Cheat Sheet Some useful syntax reminders for SQL Injection into MSSQL databases… This post is part of a series of SQL Injection Cheat Sheets. In this series, I’ve endevoured to tabulate the data to make it easier to read and to use the same table for for each database backend. This helps to highlight any features which are lacking for each database, and enumeration techniques that don’t apply and also areas that I haven’t got round to researching yet.

Dao De Jing Daripada Wikibooks. 31 Weapons are the bearers of bad news; all people should detest them. The wise man values the left side, and in time of war he values the right. listverse Mysteries Prehistory literally means the time “before we had written records” (roughly the time before the 4th Century BC) and ancient history is the time since our recorded history. Our concept of ancient history was originally firmly determined by the bible. Patterns in nature (2) David Pratt January 2006 Part 2 of 2 Contents 6. Formative power of sound 7. Planets and geometry 8.

Lilith: From Demoness to Dark Goddess undefined Return to Aaron's Homepage the lilith shrine main page | the historical lilith Lilith: From Demoness to Dark Goddess By Aaron Leitch (Khephera) The Best Hacking Tutorial Sites - Learn Legal Hacking written by: Daniel Robson•edited by: Aaron R.•updated: 2/13/2011 Whether it's to understand potential attack vectors or simply for the fun of it, learning the basics of hacking is something that a lot of people aspire to. Here's our list of the top tutorial based hacking sites. Introduction Films like Swordfish and Hackers have made hacking seem cool, a lifestyle choice almost. However most techies know that in reality it's often a difficult and time consuming process.