"She read about people she could never be, on adventures she would never have."

Hot Girl Summer Is Over, Long Live Hot Nerd Fall. Hot Girl Summer was a blast, but now as the air cools and the leaves turn, we’re tipping our collective chapeaux to Megan Thee Stallion and looking forward to a glorious new season: HOT NERD FALL. 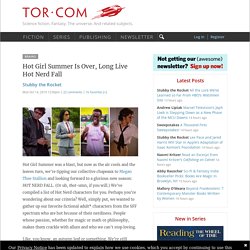 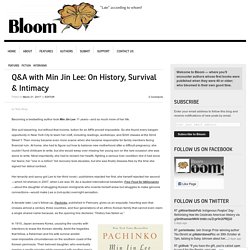 She quit lawyering, but without that income, tuition for an MFA proved impossible. So she found every bargain opportunity in New York City to learn her craft, including readings, workshops, and $200 classes at the 92nd Street Y. Then money became even more scarce when she became responsible for family members facing financial ruin. At home, she had to figure out how to balance new motherhood after a difficult pregnancy; she couldn’t fund childcare to write, but she would weep over missing her young son on the rare occasion she was alone to write. 19 of the Best Comics About Witches for Halloween. We’re fully in the midst of the witching season now. 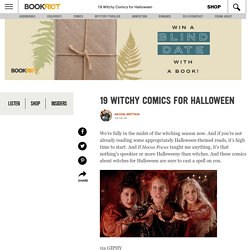 And if you’re not already reading some appropriately Halloween-themed reads, it’s high time to start. And if Hocus Pocus taught me anything, it’s that nothing’s spookier or more Halloweeny than witches. And these comics about witches for Halloween are sure to cast a spell on you. via GIPHY Ahem. The Intoxicating Power of Fictional Characters That Spill Into the Reader's World. Stories about fictional characters coming to life are, at heart, stories about reading and writing. 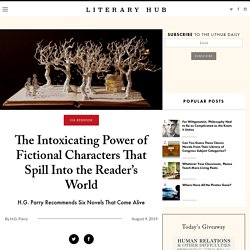 They celebrate the bond between a reader, a writer and a book, and they explore the complicated relationship between fiction and reality. What Your Favorite Beach Read Says About You. It’s summer, so it’s now officially time for the latest edition of one of my favorite (admittedly year-round) activities: making snap judgements about people based on what book they’re reading!

"André Aciman, Call Me By Your Name Your expectations for this summer are probably a little high." 🤣 – brindill_e 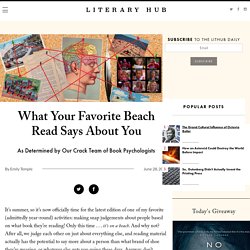 And why not? After all, we judge each other on just about everything else, and reading material actually has the potential to say more about a person than what brand of shoe they’re wearing, or whatever else gets you going these days. 7 Books About Magic Coming Back. We often associate magical stories with childhood—maybe because of fairy tales, maybe because so many of us grew up on Harry Potter, but stories about wizards and dragons are often seen as immature. 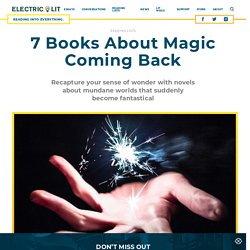 Personally, I got more realistic and skeptical in my reading choices as I got older; the spell-casting sorcerers of my youth felt less accessible, and fantasy became a genre that seemed best enjoyed by, and therefore belonging to, the wide eyes and untainted minds of younger readers. That is, until one of the last English classes of my college career: High Fantasy. This class had me shaking hands with talking bears, watching magical duals, and witnessing resurrections. 10 of the Best Webcomics for Newcomers. Webcomics/webtoons are incredible. 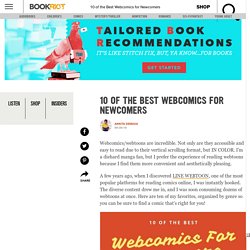 Not only are they accessible and easy to read due to their vertical scrolling format, but IN COLOR. Love, Death, and Magic: 22 Gorgeous Victorian Poems. A friend of mine gave me one of those Faber & Faber Poetry Diaries for Christmas last year. 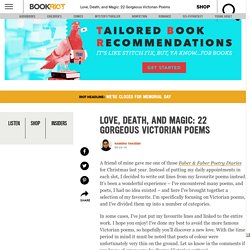 Instead of putting my daily appointments in each slot, I decided to write out lines from my favourite poems instead. What Do Adults Love About YA Fantasy? YA Fantasy Week is sponsored by Flatiron Books. Welcome to Finale, the final book in Stephanie Garber’s #1 New York Times bestselling Caraval series! It’s been two months since the Fates were freed from a deck of cards, two months since Legend claimed the throne for his own, and two months since Tella discovered the boy she fell in love with doesn’t really exist. Tella must decide if she’s going to trust Legend. After uncovering a secret, Scarlett will need to do the impossible. 'Here is a story! Story it is': how fairytales are told in other tongues.

In Tamil, folk stories and fairytales, the sort that grandparents tell grandchildren before bed, often begin, “In that only place…”. 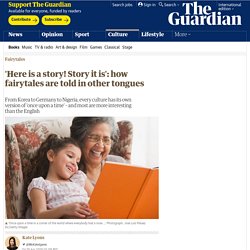 In another Indian language, Telugu, stories start “Having been said and said and said…”. In English, of course, it is “Once upon a time…”. Chitra Soundar, an Indian-British author and storyteller, was thinking about her grandmother’s stories, which always began with the classic Tamil opener, when she asked people on Twitter to share how stories began in their languages.

Chitra Soundar (@csoundar)Like “ once upon a time “ in English, in Tamil we used to start stories with “in that only place...” ஒரே ஒரு ஊரிலே... what are the conventions in other cultures? Recommends music, movies, TV shows, books, authors, games, and podcasts. FILM ADAPTATION FRIDAY: The Foxhole Court by Nora Sakavic. Queering Hogwarts: Fantasy Books That Succeed Where Harry Potter Fails. 16 Libraries That Look Like Hogwarts IRL. Book Series Recaps. 10 Terrifying 21st Century Novels. The scary season is upon us, and with it comes the perfect excuse to raise from the dead/remove from the freezer a few classic works of contemporary horror fiction, because who among us doesn’t want to be at least a little frightened on Halloween? 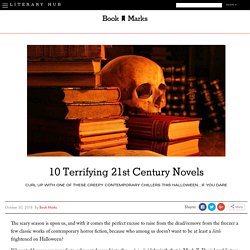 If haunted houses are your forte, why not descend into the unheimlich labyrinth that is Mark Z. Danielewski’s turn of the millennium matryoshka tale of madness and obsession, House of Leaves. Perhaps you prefer your horror domestic, realist, and peopled by evil children, in which case Lionel Shriver’s queasy novel of motherhood gone wrong, We Need to Talk About Kevin, will be more your speed. Article continues after advertisement Or maybe you’re looking for something with more of a fantastical bent; say, a dark, socially-conscious modern-day fairytale? House of Leaves by Mark Z. The 25 Most Terrifyingly Beautiful Edgar Allan Poe Illustrations. It’s hard to imagine an author whose legacy outstrips Edgar Allan Poe’s, widely credited as a progenitor for mystery, detective fiction, tales of suspense, weird fiction, gothic fiction, and of course horror.

His influence is felt today all over the literary world, a statement that has been more or less true for most of the last two centuries. Poe inspired not only writers but artists of all kinds. His tales of the strange and mysterious tap into deep veins of the imagination and subconscious. 10 Fantasy Books to Pair with Your Favorite Halloween Movies. Your spine tingles. The floor creaks. R.F. Kuang on THE POPPY WAR, Peace, and Confronting History.

"I don't believe in canon in general" – brindill_e

She holds a master's in computer science and spent years as a successful programmer, but she thrived on the fan fiction she wrote in her spare time. I Can't (Won't) Separate the Art from the Abusive Artist. 9 Nonfiction Books Every Harry Potter Fan Should Read, From 'The Royal Art Of Poison' To 'Witches Of America' Reading Pathways: Hiromi Kawakami. What Does A Goodreads Three Star Rating Mean to You? 100 Must Read Fairytale Retellings for Adults and YA Readers.

This list of must-read fairytale retellings for adults and YA readers is sponsored by Everywhere You Want to Be by Christina June, Blink YA Books. From author Christina June comes a new young adult novel, Everywhere You Want to Be, a modern retelling of the Red Riding Hood story. Tilly Castillo thought she lost her chance to be a contemporary dancer, but when a summer job in New York City appears, nothing can stop her from saying yes—not her mother, not the other cutthroat dancers, and not even her fears of the big city.

The Useful Dangers of Fairy Tales. The Rise of Dystopian Fiction: From Soviet Dissidents to 70's Paranoia to Murakami. Harper Lee estate endorses To Kill a Mockingbird graphic novel.

This might be the way to finally get myself to read this book. I'm excited! – brindill_e

Laurie Isn't a Good Guy; He's a Nice Guy™ The first time I read Little Women, I remember being absolutely devastated Jo didn’t choose Laurie. Against Worldbuilding. 10 Transgressive Fairy Tales for Grown-Ups. In Defense of the English Major. I don’t often think the English major needs a lot of defending. To me, it speaks for itself, through all the happy graduates with English degrees (myself included) and current English majors. And yet, people haven’t stopped discounting the English major. 13 Horrible Apocalypses That Will Make You Question Your Faith in Humankind.

100 Must-Read YA Books for Feminists and Feminists-in-Training. Fantasy is About Power: An Interview with Lev Grossman. 100 Must-Read YA Books With Little Or No Romance. 40+ Of Your Favorite YA Fantasy Adventure Books. 100 Must-Read YA Historical Fantasy Novels. The Best Books of 2016, So Far. 100 Must-Read Strange and Unusual Novels. 13 Books like Harry Potter for Adult Readers. Fandom According to YA Lit. Genre Kryptonite: Adding X-Men to Anything. No Pressure: Suggesting vs. Recommending a Book.

Anatomy of a Scene: Darcy's (first) Proposal. Why Do We Accept Unlikable Characters On the Screen but Not the Page? Prolonging the Magic: On Fiction, Food, and Fandom. 6 Ways Fictional Love Interests Can Be Unintentionally Creepy. TFW You Discover Love for a New Genre. On Having Non-Reader Friends and Relatives. 8 Times Tumblr's Wizarding World Was Better Than Pottermore's. It's Time To Use the B(isexual) Word. North American Magic: The Worst Thing to Happen to Harry Potter Since Voldemort. Fjordson Comic. Webcomic : Check, Please!

13 More Titles for Harry Potter Fans - Reader's Choice Edition. Harry Potter and the Philosopher's Stone Illustrated Edition - J.K.Rowling and Jim Kay. Bookish Thoughts: I’m Starting to Dread Series. Your 40+ Favorite Books Based on Mythology. The Benefits of Reading a Book You Don't Like. 23 Books That Everyone With Wanderlust Should Read. How to Analyze Male Characters in Book Reviews. On Dating Books. More Like Harry Potter and the Chamber of Secrets. by Nesskain. Imagining a Fandom Edition of an Annotated Harry Potter. Which Darcy Is Your One True Darcy. Does FanFic Fix Fiction? Five Authors to Get You Started In M/M Romance. Eight Literary Worlds Recreated in Minecraft. John Green Explains How 'Paper Towns' Resembles His Own Teen Years. 10 Best Coming-of-Age Books You've Never Read. The Perils of Re-Reading. Overcoming Judging Books by Their Characters. The 25 Most Homoerotic Friendships in Literature. The 'Parks and Recreation' Bibliography: 21 Tomes of Pawnee - Signature Reads.

A life in letters, with Tom Gauld - in pictures. Tropes and Why We Love Them (And Love To See Them Smashed) 15 Brilliant Books That Won The National Book Critics Circle Award For Fiction. 23 Struggles Only Book Nerds Will Understand. Women Aren't Aliens (and Other Thoughts on the Andrew Smith Controversy) 12 Creative Examples of Bookish Advertising. 7 Sci-Fi/Fantasy Heroines You May Not Know (But Should) If Hermione Were The Main Character In "Harry Potter" George R. R. Martin Shoots Down A Huge 'Game Of Thrones' Fan Theory. Children’s books are never just for children.

Bookish Thoughts: I Hate It When I Don’t Like a Book. 4 Lessons From Selling Books. 19 Amazing Details from The Wizarding World of Harry Potter. 10 Beautiful Bookshops That Will Stop You In Your Tracks. 18 Of The World's Greatest Libraries. 23 Words For Book Lovers That Really Should Exist.

Related:  Reading Resources   -  Being Shy & Introversion   -  Well, they used to Live Upon   -  United States Constitution - Wikipedia, the free encyclopedia   -  The 101 Most Useful Websites on the Internet   -  Eve and the Identity of Women: 7. Eve & Lilith   -  Social Studies for Kids | Social Studies Activities | History for Kids   -  Book of the Dead - Wikipedia, the free encyclopedia   -  Unit 11: Cold War   -  95 best websites you should bookmark today   -  My Top 100 Awesome Websites To Kill Time   -  Cartographies of Time: A Visual History of the Timeline | Brain Pickings   -  Synonyms for the 96 most commonly used words in English | Just English   -  Education   -  Enterprise