Christopher deCharms looks inside the brain 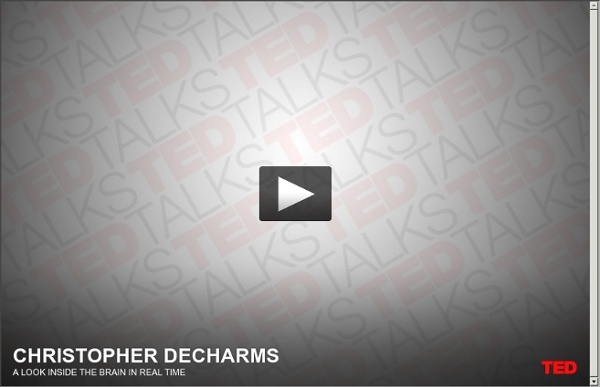 Neuron All neurons are electrically excitable, maintaining voltage gradients across their membranes by means of metabolically driven ion pumps, which combine with ion channels embedded in the membrane to generate intracellular-versus-extracellular concentration differences of ions such as sodium, potassium, chloride, and calcium. Changes in the cross-membrane voltage can alter the function of voltage-dependent ion channels. If the voltage changes by a large enough amount, an all-or-none electrochemical pulse called an action potential is generated, which travels rapidly along the cell's axon, and activates synaptic connections with other cells when it arrives. Neurons do not undergo cell division. Overview[edit] A neuron is a specialized type of cell found in the bodies of all eumetozoans. Although neurons are very diverse and there are exceptions to nearly every rule, it is convenient to begin with a schematic description of the structure and function of a "typical" neuron. Polarity[edit]

Functional magnetic resonance imaging Researcher checking fMRI images Functional magnetic resonance imaging or functional MRI (fMRI) is a functional neuroimaging procedure using MRI technology that measures brain activity by detecting associated changes in blood flow.[1] This technique relies on the fact that cerebral blood flow and neuronal activation are coupled. When an area of the brain is in use, blood flow to that region also increases. The primary form of fMRI uses the Blood-oxygen-level dependent (BOLD) contrast,[2] discovered by Seiji Ogawa. The procedure is similar to MRI but uses the change in magnetization between oxygen-rich and oxygen-poor blood as its basic measure. This measure is frequently corrupted by noise from various sources and hence statistical procedures are used to extract the underlying signal. FMRI is used both in the research world, and to a lesser extent, in the clinical world. Overview[edit] History[edit] Three studies in 1992 were the first to explore using the BOLD contrast in humans.

Electroencephalography Simultaneous video and EEG recording of two guitarists improvising. Electroencephalography (EEG) is the recording of electrical activity along the scalp. EEG measures voltage fluctuations resulting from ionic current flows within the neurons of the brain.[1] In clinical contexts, EEG refers to the recording of the brain's spontaneous electrical activity over a short period of time, usually 20–40 minutes, as recorded from multiple electrodes placed on the scalp. EEG is most often used to diagnose epilepsy, which causes obvious abnormalities in EEG readings.[2] It is also used to diagnose sleep disorders, coma, encephalopathies, and brain death. Derivatives of the EEG technique include evoked potentials (EP), which involves averaging the EEG activity time-locked to the presentation of a stimulus of some sort (visual, somatosensory, or auditory). History[edit] Hans Berger In 1934, Fisher and Lowenback first demonstrated epileptiform spikes. Source of EEG activity[edit] Clinical use[edit]

Christopher de Charms demonstrates how accurate, fine-grained and real-time fMRI allows one to look at him own brain in action. This allows a person to actively exercise his brain. This supplements Ramachandran's [VS Ramachandran: on your mind] clinical research and treatment. DeCharms' work also allows using Gero Miesenboeck's approach [Gero Miesenboeck: reengineers the brain] on ungenetically altered humans. by kaspervandenberg Nov 7