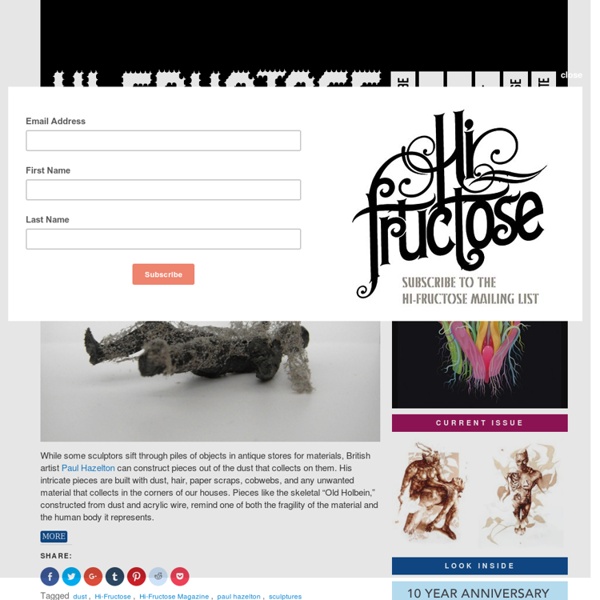 Among the list of artists who’ve designed Hint Mint tins are Audrey Kawasaki, Lola, James Jean, Gary Baseman, Shag, Glenn Barr, and most recently, Brandi Milne (featured in our exclusive book and print set). On Thursday, iam8bit Gallery brought them together for the first time in a special retrospective and launch of the limited edition artist series by Milne. Milne’s original paintings on display can also be appreciated as a singular new body of work, an extension of her candy colored wonderland. Read more after the jump. Last weekend, Corey Helford Gallery’s Circa opened Ray Caesar and Beau Stanton’s side by side solo shows. Despite this abstract pairing, together their latest works reveal something personal about each artist.

Bruno Catalano - In Search of Missing Pieces ‘In Search of Missing Pieces’ is a series of original sculptures by French artist Bruno Catalono. Caught my eye big time! Via My Modern Met The Ten Golden Rules – Lomography Every second is special for you and your LOMO LC-A; every moment is monumental! When you are Lomographing, you're not only living your life at the present with more intensity and excitement, but you're also conserving the present for your future. All with the help of your bright, dark, moody, blurred, sharp, colourful, grey, indefinable, straightforward, romantic and fully packed Lomographs!

Tensile structure Most tensile structures are supported by some form of compression or bending elements, such as masts (as in The O2, formerly the Millennium Dome), compression rings or beams. A tensile membrane structure is most often used as a roof, as they can economically and attractively span large distances. History[edit]

Small Ass Zines Small Ass Zines goes to Texas!! There will be an exhibition at the Zine Society Library in CentralTrak, The University of Texas at Dallas Artist Residency and Gallery. Please email me at ness@nesslee.com for more information and deadlines! Andy Gilmore personal cargo Andy Gilmore’s favorites Recently commented on Andy Gilmore’s project Polytopia The human species is rapidly and indisputably moving towards the technological singularity. Boredstop.com { Tim Noble and Sue Webster, Dirty White Trash [With Gulls], 1998 | six months’ worth of the artists’ rubbish } { Tim Noble and Sue Webster, Real Life is Rubbish, 2002 | two separate piles of general household rubbish onto which a light is projected, creating a shadow self-portrait of Noble and Webster } { Tim Noble and Sue Webster, HE/SHE, 2003 }

sidewalk chalk guy sidewalk chalk guy «« back to gprime.net all material copyrighted by its original creator | Top 12 Banksy Pieces of 2010 12.) San Francisco Banksy is the gold standard when it comes to urban street art. His legendary reputation has only grown since the 2010 release of his intriguing movie, "Exit Through the Gift Shop" (which is streaming now). Signs for the Homeless We have begun to accept submissions. If you have any we’d love to see them, please email at homelesssignstumblr@gmail.com - Chris H. (*Person has requested to not use his face online) November 2013, Park Street, Boston, MA 1.

Kris Kuksi Makes Demons in Our Mind Come Alive (14 Pics) Seven Deadly Sins What would happen if someone can tap into your darkest nightmares and your most hidden fears? Would they see a world full of aggression and hate? A world where man struggles with his sins, where no one can escape from a hell of mental anguish, suffering, and guilt? New York by Subway Case study images for Interband's Singapore's redesign and branding of Banco De Oro's branches in Manila.Photography, Digital Photography2012