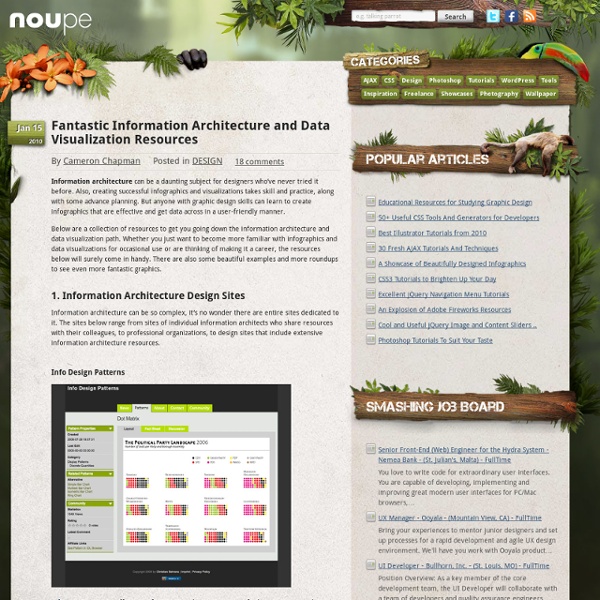 Maps In Modern Web Design: Showcase and Examples - Smashing Magazine Advertisement Geo-location was a hot topic in 2009. With so many applications on GPS-enabled smartphones, more maps than ever were accessible to the average person. But how can Web designers and developers take advantage of an increasingly location-aware user base? The Fundamentals Of Online Maps When most people think of maps on the Internet, Google, MapQuest and TomTom might come to mind. This isn’t a lesson in cartography, but understanding the purposes that maps can serve in modern Web design is important. Navigation and directions,Show relationships and trends geographically,Show points of interest. Interactive Maps The expansion of Web technology over the past decade has opened a number of doors to presenting data online. Interactive maps on the Internet present data most effectively when they invite action from the user. Panning and zooming are fundamental to the interactive map. No Legend Required On traditional print maps, the legend serves as a translator for the symbols used.

Trendspotting: Rich Autocomplete in Site Search | Get Elastic One trend I’ve noticed on a few enterprise software sites is the use of rich autocomplete in search results, although I haven’t seen it on other retail categories. For example, Dell.com uses a simple autocomplete feature in its search box. Autocomplete is helpful to the customer because it prevents errors from misspellings or synonyms the search engine doesn’t support (and the dreaded “0 results found”). For example, I may be thinking “USB stick” and when I type USB into the search box I see “USB flash drive” suggested as I type, so I select that (which as it turns out delivers much more relevant results than a search for “stick.”) With rich autocomplete, the retailer can include thumbnail images, prices, value propositions, special offers etc. Check out these examples: Apple Store Because the brain recognizes and interprets images faster than text, showing thumbnails of Final Cut Pro software for quick scanning is better than a list of text links. Adobe Microsoft Just the beginning?

Understanding by Design InfoGraphic Designs: Overview, Examples and Best Practices | Ins Information graphics or infographics are visual representations of information, data or knowledge. These graphics are used where complex information needs to be explained quickly and clearly, such as in signs, maps, journalism, technical writing, and education. They are also used extensively as tools by computer scientists, mathematicians, and statisticians to ease the process of developing and communicating conceptual information. They can present a rich amount of information without intimidating you. Or sometimes they intimidate you, but make the digesting of the information much more bearable. Here in this article below, we are going to discuss best practices for designing infographics followed by some examples which might help you learn a thing or two. You may be interested in the following related articles as well. Feel free to join us and you are always welcome to share your thoughts that our readers may find helpful. Don’t forget to and follow us on Twitter — for recent updates. 01.

How Conceptual Metaphors are Stunting Web Innovation Venkatesh Rao is a researcher in the Xerox Innovation Group, and the project manager for Trailmeme, a research beta technology that allows users to blaze and follow trails through web content and the Trailmeme for WordPress plugin. He blogs at ribbonfarm.com. As much as we focus on developing new technologies, it is also essential that we break free of certain metaphors that bind and restrict our thinking about what these technologies can ultimately achieve. The familiar "document" metaphor, among others, has cast a long shadow on how we think about the web, and is standing in the way of some innovation. The Conceptual Metaphor In his classic study of media theory, Understanding Media, Marshall McLuhan wrote, “We look at the present through a rear-view mirror. Consider these terms: page, scroll, file, folder, trash can, bookmark, inbox, email, desktop, library, archive and index. It is important to understand that the document metaphor is more than a UI metaphor. The solution? Conclusion

ARISTOTLE" (THE KNOWLEDGE WEB) By W. Daniel Hillis Bush's imagined solution to this problem was something he called Memex. Memex was envisioned as a system for manipulating and annotating microfilm (computers were just then being invented). The system would contain a vast library of scholarly text that could be indexed by associations and personalized to the user Although Memex was never built, the World Wide Web, which burst onto the scene half a century later, is a rough approximation of it. As useful as the Web is, it still falls far short of Alexander's tutor or even Bush's Memex. For one thing, the Web knows very little about you (except maybe your credit card number). A New Tool for Learning Let's put aside the World Wide Web for a moment to consider what kind of automated tutor could be created using today's best technology. For example, one topic in the knowledge web might be Kepler's third law (that the square of a planet's orbital period is proportional to the cube of its distance from the sun). Table of Affordances

Useful Usability Dynamic Diagrams' take on the world of visual explanation, information architecture, design, and technology Article Of The Future: Scientific Research Meets The Web Scientific journal Cell has undergone a design change to add a dynamic element to their research articles. Taking a page from web page information architecture, Cell has adopted a new layout that makes navigation easier, and forgoes the staid look of traditional research papers. Ars Technica reports: What Cell came up with was a format it has christened “Article of the Future.” Articles of the Future are broken down into their respective sections (Introduction, Discussion, Figures, and so on) with a navigation section at the top, allowing readers to jump to the sections they are most interested in. Ars Technica: “Cell launches “Article of the Future” format”