10 Great Free Google Forms Every Teacher Should Be Using 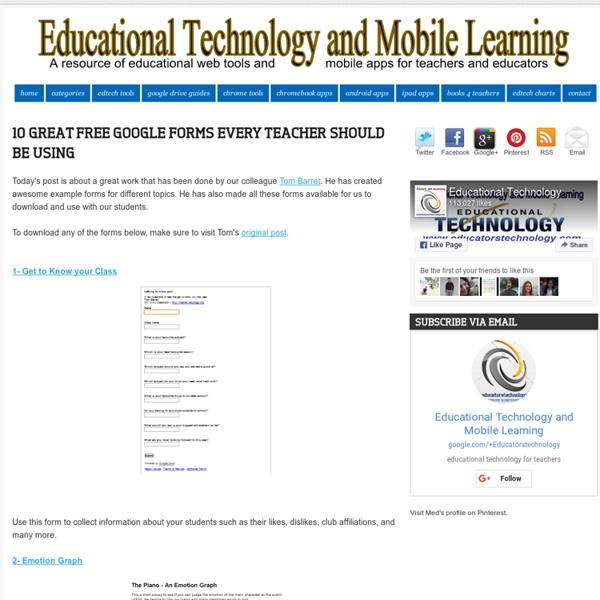 Today's post is about a great work that has been done by our colleague Tom Barret. He has created awesome example forms for different topics. He has also made all these forms available for us to download and use with our students. To download any of the forms below, make sure to visit Tom's original post. 1- Get to Know your Class Use this form to collect information about your students such as their likes, dislikes, club affiliations, and many more. 2- Emotion Graph This is a form ideal for use by students when studying linear narrative both written or visual. 3- Spelling Test As its name suggests , this form is great for use inside the classroom to test students spelling. 4- Comprehension Questions This is a form that test students understanding of a text or anything thing else you want to test. 5- Weekly Reading Record This is a form where students can provide data about their reading. 6- Maths Data Handling 7- Guided Reading Record 8- Prior Learning Assessment 9- Library Book Review

450+ new ways to make your Google presentations pop Good design is an important part of getting your point across in a presentation. Over time we’ve added a bunch of features to help you bring a little something extra to your decks, like slide transitions and animations, thousands of free stock photos, and a growing collection of templates. Today, creating eye-catching presentations gets even easier, with more than 450 new fonts to choose from. (flip through the presentation below to see them in action) Google Takes Street View Into the Oceans - Rebecca J. Rosen Roads? Where we're going, we don't need roads! Catlin Seaview Survey In the five years since Google Street View launched in 2007, the feature has been a strictly above-ground experience.

80+ Google Forms for the Classroom If you're new here, you may want to subscribe to my weekly newsletter. Thanks for visiting! Google Forms is a great tool for the classroom and this post from 2008 has always proven popular on my blog. Edtech Tofu: Using FormMule and IFTTT for a moderated student twitter feed. Just about a year ago, I had the pleasure of camping with +Jasper Fox. We talked about Twitter in the classroom as we sat around the fire. As usual, the conversation was great, we strategized about a Google form that a would allow students to compose tweets and the teacher to moderate them directly to Twitter. It took me a year to realize this simple workflow, but I think my teachers will love it in September.

10 Google Products You (Probably) Never Knew Existed I don’t know about you, but it feels like Google launches a new product every time I turn my laptop on. And these new products tend to fit into two distinct categories: Incredibly usefulIncredibly bizarre Fortunately, most of these products are free so we’re really not in a position to complain! After some lengthy research, I was surprised by how many tools Google has either developed or acquired over the years. Google Search Gets a Cool and Useful Calculator Before today, when you typed an equation into Google — say, "15 x 7" — the answer (105, if you must know) would appear in bold above you actual search results. Now Google has gone one step further, giving you your answer on a virtual calculator. The blue-hued calculator appears above your results, as before, and has 34 buttons, including standard trigonometric functions, exponents and buttons for the transcendental numbers, pi and e. Bonus: It also works on mobile. In our quick test, it appeared in both Safari and Chrome on iOS and of course on Android as well. Although the scientific functions aren't visible in portrait mode, they appear when you flip your phone to landscape — a trick Google's borrowing from the iOS-standard calculator.

10 Advanced Tips & Tricks For Google Forms Advertisement If Google Forms is not yet your go-to form maker, it’s time for us to change your mind. You may think you know everything there is to know about Google Forms, but thanks to Google’s use-it-and-you’ll-work-it-out attitude, perhaps you don’t. A Must Have Google Drive App for Teachers May 8, 2014 Since the introduction of add-ons to Google Drive a few weeks ago, I tried several of these extensions on my Google Drive and I am really impressed by the great service some of them offer. Today, I am sharing with you one of my favourite apps to use on Google Sheets. This add-on is called Doctopus. Doctopus is a handy Spreadhseet script which allows teachers to make copies and hand out google Drive files to students listed in a Google Sheet. Doctopus also allows teachers to keep track of their shared documents with the possibility of providing timely feedback to students right in the spreadsheet itself. Watch the video below to learn more about how to use Doctopus on your Google Sheets.

10 Things Every Teacher Should Know How To Do With Google Docs Google Docs is a powerful word processing tool that many schools have adopted. As it’s similar to Microsoft Word and other word processing tools, most of its features are intuitive to use. However, in addition to completing many of the functions of a traditional word processor, Google Docs provides even more capabilities that can be invaluable to educators. Here are ten tricks that can make your life easier with Google Docs: Google Docs facilitates finding facts and doing research While making a travel itinerary, writing a term paper, or creating a budget in Google Docs, users no longer have to leave the confines of the word processing program to find specific facts or do research. Google announced today the launch of a new feature called the "research pane" that lets users find information in Google search directly from within the documents program. In a blog post, this is how Google software engineer Sarveshwar Duddu explained how to use the feature: You can access the research pane from the Tools menu by right clicking on a selected word that you want to learn more about, or by pressing Ctrl+Alt+R on Windows or Cmd+Alt+R on Mac.

10 Google Docs Hacks Every Teacher Should Know Google Docs is a popular word processing tool because it allows ready access to your documents and files from any internet connected device. It permits users to readily share documents and easily collaborate on materials. If you are already familiar with Google Docs, try out these 10 hacks to up your Google game! Convert a Word Doc to Google Docs Microsoft Word is still the most popular word processor in the business, educational, and private world. Even if you have fully jumped on the Google Docs bandwagon, undoubtedly you encounter a Word document on a regular basis or perhaps you have a repository of older Word Docs.